Harry Houdini (March 24, 1874 – October 31, 1926), was a magician, escape artist, and daredevil who captivated much of the Western world with his exploits in the first quarter of the twentieth century. He amazed and excited crowds with his death defying escapes. He wore shackles and handcuffs and ordered his assistants to lock him in trunks or submerge him underwater. Houdini became world famous by traveling across America and the world thrilling his fans. In performing his escapes and feats of physical and psychological endurance, Houdini pushed his mind and his body to extremes, proving himself to be an athlete as well as a magician. He was able to control the mind-body dynamic to extraordinary lengths. He also believed in the reality of the after-life and thus of a spiritual dimension to human existence. He achieved such fame for his exploits that the name "Houdini" remains synonymous with the art of escapism.

Houdini was born as Erik Weisz in Budapest, Hungary to a Jewish family; upon immigration to America the family name was changed to Weiss by immigration officials and his first-name spelling to Ehrich. His father was a rabbi and his mother was Cecilia Steiner.

He immigrated with his father at the age of four on July 3, 1878, on the SS Fresia. On June 6, 1882, his father, Rabbi Weiss became an American citizen and moved to New York City with Ehrich in 1887. They lived in a boarding-house on East 79th Street. Rabbi Weiss later was joined by the rest of the family once he found more permanent housing. As a child Ehrich took several jobs, one of which was as a locksmith's apprentice. He made his public debut as a 9 year old trapeze artist, calling himself, "Ehrich, the prince of the air."

"My Lovely Sweethearts." Houdini with his wife and mother, ca. 1907.

Weiss became a professional magician in 1891 at age 17, and began calling himself "Harry Houdini" because he was influenced by French magician Jean Eugène Robert-Houdin. The first part of his new name, Harry, was an homage to Harry Kellar, another of Weiss' largest influences. Initially, his magic career resulted in little success, though he met fellow performer Wilhelmina Beatrice (Bess) Rahner in 1893, and married her three weeks later. For the rest of his performing career, Bess would work as his stage assistant.

Houdini initially focused on traditional card acts. At one point he billed himself as the "King of Cards" and “King of Handcuffs." One of his most notable non-escape stage illusions was performed in London's hippodrome: he vanished a full-grown elephant (with its trainer) from a stage, beneath which was a swimming pool.

Harry Houdini's "big break" came in 1899, when he met the showman Martin Beck. Impressed by Houdini's handcuffs act, Beck advised him to concentrate on escape acts and booked him on the Orpheum vaudeville circuit. Within months, he was performing at the top vaudeville houses in the country. In 1900, Houdini traveled to Europe to perform. By the time he returned in 1904, he had become a sensation.

Houdini performed with great success in the United States. He would free himself from handcuffs, chains, ropes and straitjackets, often while hanging from a rope or suspended in water, sometimes in plain sight of the audience. In 1913, he introduced perhaps his most famous act, the Chinese Water Torture Cell, in which he was suspended upside-down in a locked glass and steel cabinet full to overflowing with water. He held his breath for over three minutes.

In 1919 Houdini became president of Martinka & Co., America's oldest magic company. The business is still in operation today. After his amazing career in magic, Houdini became obsessed with two things: Flight and Movies. In 1910, while on a tour of Australia, Houdini brought with him a primitive bi-plane with which he made the first controlled powered aeroplane flight in Australia, at Diggers Rest, Victoria.

A new biography of Houdini, The Secret Life of Houdini: The Making of America's First Superhero, by magic historian William Kalush and author Larry "Ratso" Sloman suggests that he worked for both Scotland Yard and the US Secret Service. It suggests that he used his escape act tours to cover intelligence gathering. This assertion was documented in a journal kept by Scotland Yard Inspector William Melville, who worked for British intelligence. The author's conclusions have been endorsed by former CIA director John McLaughlin who wrote the preface for The Secret Life of Houdini. 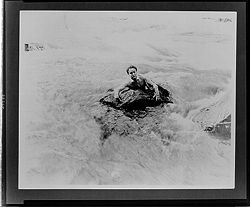 Houdini's last performance was at the Garrick Theater in Detroit, Michigan on October 24, 1926. The next day he was hospitalized at Detroit's Grace Hospital. Houdini died of peritonitis from a ruptured appendix at 1:26 p.m. on Halloween, October 31, 1926, at the age of 52.

The most widespread account is that Houdini's ruptured appendix was caused by multiple blows to his abdomen from a McGill University student, J. Gordon Whitehead, in Montreal on October 22. The eyewitnesses to this event were two McGill University students named Jacques Price and Sam Smilovitz. Houdini was reclining on his couch after his performance, having an art student sketch him. When Whitehead came in and asked if it was true that Houdini could take any blow to the stomach, Houdini replied in the affirmative. In this instance, he was struck several times, before Houdini protested. Whitehead reportedly continued hitting Houdini several times afterward, and Houdini acted as though he were in some pain. Price recounted that Houdini stated that if he had had time to prepare himself properly, he would have been in better position to take the blows.

Houdini's funeral was held on November 4, 1926, in New York, with over two thousand mourners in attendance. He was interred in the Machpelah Cemetery Queens, New York, with the crest of the Society of American Magicians inscribed on his gravesite. The Society holds their "Broken Wand" ceremony at the gravesite on the anniversary of his death to this day. Houdini's wife, Bess, died in February 1943, and was not permitted to be interred with him at Machpelah Cemetery because she was a not Jewish. Bess Houdini is interred at Gate of Heaven Cemetery in Hawthorne, New York.

In Houdini's will, his vast library was offered to the American Society for Psychical Research on the condition that research officer and editor of the ASPR Journal, J. Malcolm Bird, resign. Bird refused and the collection went instead to the Library of Congress.

Fearing spiritualists would exploit his legacy by pretending to contact him after his death, Houdini left his wife a secret code—ten words chosen at random from a letter written by Doyle—that he would use to contact her from the afterlife. His wife held yearly séances on Halloween for ten years after his death, but Houdini never appeared. In 1936, after a last unsuccessful séance on the roof of the Knickerbocker Hotel, she put out the candle that she had kept burning beside a photograph of Houdini since his death, later (1943) saying "ten years is long enough to wait for any man." The tradition of holding a séance for Houdini continues to this day, and is currently organized by Sidney H. Radner. 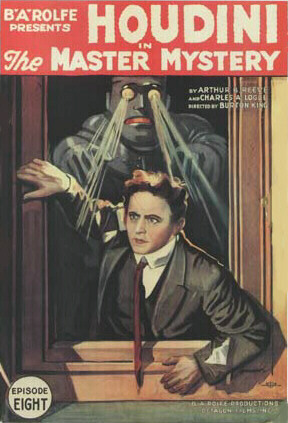 Houdini published numerous books during his career (some of which were written by his good friend Walter Brown Gibson, the creator of The Shadow):