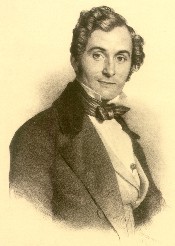 Gustav Albert Lortzing (October 23, 1801 - January 21, 1851) was a German Romantic composer of comic and romantic operas as well as oratorios, songs, and incidental music. He was especially renowned for his comic operas in which he combined spoken dialogue with musical segments and added in humorous elements. Lortzing derived a formula for his operatic successes that permitted him to give his audiences the music, drama, and humor they expected.

Lortzing composed romantic opera that took middle-class interests into account and dramatic works that were more easily performed by amateur musicians. He overcame barriers of status and class by conforming his operas to the life styles of the working person.

Lortzing was born in Berlin, Germany, to parents who both were actors. When he was 19 years old, Lortzing began to play the role of youthful lover (Jugendlicher Liebhaber) at the theaters of Düsseldorf and Aachen, sometimes also singing in small tenor or baritone voice parts.

His first opera, Ali Pascha von Janina, appeared in 1824, but his fame as a musician rests chiefly upon the two operas Der Wildschütz (1842) and Zar und Zimmermann (1837).

Zar und Zimmermann (The Tsar and the Carpenter) was received with very little enthusiasm by the public of Leipzig. However, subsequent performances in Berlin produced a much more positive reaction. The opera was soon placed on all the stages of Germany, and is now regarded as one of the masterpieces of German comic opera. It was translated into English, French, Swedish, Danish, Dutch, Bohemian, Hungarian, and Russian. The story is based around Tsar Peter I "The Great" of Russia, who traveled to Germany, Holland, and England disguised as a carpenter in order to gain first-hand knowledge he believed necessary for his country's economic progress, such as modern ship-building techniques.

Der Wildschütz (The Poacher) was based on a comedy by August von Kotzebue, and was a satire on the unintelligent and exaggerated admiration for the highest beauty in art expressed by the bourgeoisie gentilhomme.

Of his other operas it is only necessary to note Der Pole und sein Kind, produced shortly after the Polish insurrection of 1831, and Undine (1845).

Lortzing was well known in Berlin and after his death, a memorial statue was erected in the Tiergarten, in Berlin.

Gustav Albert Lortzing used his experience as an actor, vocalist, and conductor to create opera comiques which were extremely popular theatrical entertainments due to their songs and dialogue. As an actor, Lortzing knew how to appeal to an audience with humor and dramatic dialogue. His vocal background made him very sensitive to the needs of singers and he would adapt arias and other vocal pieces to certain performers. His conducting experience made him knowledgeable about the strengths of each instrument and instrumental section and he wrote characteristic motifs in his orchestral works to bring out the vibrant melodies and harmonies for each orchestral section.

Lortzing's Zar und Zimmerman (Tsar and the Carpenter), Der Wildschutz (The Poacher), and Undine, a romantic opera, appealed greatly to the public taste because he took middle-class interests into account. Lortzing composed dramatic numbers that were more easily performed by amateur musicians and chose opera scenarios that were comical rather than serious. Lortzing conformed his operas to the life styles of the working person, thus overcoming the barriers of status and class.

Retrieved from https://www.newworldencyclopedia.org/p/index.php?title=Gustav_Albert_Lortzing&oldid=1061139
Categories:
Hidden category:
This page was last edited on 7 December 2021, at 08:29.
Content is available under Creative Commons Attribution/Share-Alike License; additional terms may apply. See Terms of Use for details.