Griswold v. Connecticut, 381 U.S. 479 (1965),[1] was a landmark case in which the Supreme Court of the United States ruled that the Constitution protected a right to privacy. The case involved a Connecticut law that prohibited the use of contraceptives. By a vote of seven to two, the Supreme Court invalidated the law on the grounds that it violated the "right to marital privacy." The decision significantly expanded the notion of individual rights and helped to create a "zone of privacy" that provided the basis for the Roe v. Wade decision of 1973 that gave women a constitutional right to abortion. The decision expresses the prevailing view that the state does not have the right to legislate private morality. The decision is part of the ongoing dynamic in modern democratic society between public morality and private rights.

The Supreme Court overturned Griswold's conviction and invalidated the Connecticut law. Although the Bill of Rights does not explicitly mention "privacy," Justice William O. Douglas (writing for the majority) ruled that the right was to be found in the "penumbras" of other constitutional protections. Justice Arthur Goldberg wrote a concurring opinion in which he used the Ninth Amendment to defend the Supreme Court's ruling. Justice John Marshall Harlan II wrote a concurring opinion in which he argued that privacy is protected by the due process clause of the Fourteenth Amendment. Justice Byron White also wrote a concurrence based on the due process clause.

Two Justices, Hugo Black and Potter Stewart, filed dissents. Justice Black argued that the right to privacy is to be found nowhere in the Constitution. Furthermore, he criticized the interpretations of the Ninth and Fourteenth Amendments to which his fellow Justices adhered. Justice Stewart famously called the Connecticut statute "an uncommonly silly law," but argued that it was nevertheless constitutional.

Since Griswold, the Supreme Court has cited the right to privacy in several rulings, most notably, in Roe v. Wade, 410 U.S. 113 (1973). In part based on Griswold, the Supreme Court ruled that a woman's choice to have an abortion was protected as a private decision between her and her doctor. For the most part, the Court has made these later rulings on the basis of Justice Harlan's substantive due process rationale. The Griswold line of cases remains controversial, and has drawn accusations of "judicial activism."

Griswold v. Connecticut involved a Connecticut law that prohibited the use of "any drug, medicinal article or instrument for the purpose of preventing conception." Although the law was passed in 1879, the statute was almost never enforced. Attempts were made to test the constitutionality of the law; however, the challenges had failed on technical grounds.

In Tileston v. Ullman (1943), a doctor and mother challenged the statute on the grounds that a ban on contraception could, in certain situations, threaten the lives and well-being of her patients. The Supreme Court dismissed the appeal on the grounds that the plaintiff lacked standing to sue on behalf of his patients. A second challenge to the Connecticut law was brought by a doctor as well as his patients in Poe v. Ullman (1961). However, the Supreme Court again voted to dismiss the appeal, on the grounds that the case was not "ripe." It held that, because the plaintiffs had not been charged or threatened with prosecution, there was no actual controversy for the judiciary to resolve. Thus, the Connecticut statute had evaded judicial review until Griswold v. Connecticut.

In Poe, Justice John Marshall Harlan II filed one of the most cited dissenting opinions in Supreme Court history. He argued, foremost, that the Supreme Court should have heard the case rather than dismissing it. Thereafter he indicated his support for a broad interpretation of the due process clause. He famously wrote, "the full scope of the liberty guaranteed by the Due Process Clause cannot be found in or limited by the precise terms of the specific guarantees elsewhere provided in the Constitution. This 'liberty' is not a series of isolated points pricked out in terms of the taking of property; the freedom of speech, press, and religion; the right to keep and bear arms; the freedom from unreasonable searches and seizures; and so on. It is a rational continuum which, broadly speaking, includes a freedom from all substantial arbitrary impositions and purposeless restraints." On the basis of this interpretation of the due process clause, Harlan concluded that the Connecticut statute violated the Constitution.

Shortly after the Poe decision was handed down, Estelle Griswold (Executive Director of the Planned Parenthood League of Connecticut) and Dr. C. Lee Buxton (a physician and professor at the Yale School of Medicine) opened a birth control clinic in New Haven, Connecticut, in order to test the contraception law once again. Shortly after the clinic was opened, Griswold and Buxton were arrested, tried, found guilty, and fined $100 each. The conviction was upheld by the Appellate Division of the Circuit Court, and by the Connecticut Supreme Court of Errors. Griswold then appealed her conviction to the Supreme Court of the United States. 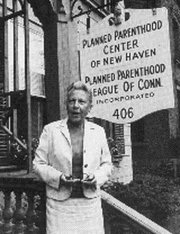 The reasoning and language of both Griswold and Eisenstadt were cited in support of the Court's result in Roe v. Wade (1973). The decision in Roe struck down a Texas law that criminalized aiding a woman in getting an abortion. The Court recognized this law as a violation of the Due Process Clause of the Fourteenth Amendment. The law was struck down, legalizing abortion for any woman for any reason she chooses, up until the fetus reaches a point in development in which it can survive outside of the womb.

Lawrence v. Texas (2003) struck down a Texas state law that prohibited certain forms of intimate sexual contact between members of the same sex. Using rational basis review, the Court overruled Bowers v. Hardwick (1986), declaring that the "Texas statute furthers no legitimate state interest which can justify its intrusion into the personal and private life of the individual." Justice Kennedy's majority opinion, based on the liberty interest protected in the due process clause of the Fourteenth Amendment, stated that the Texas anti-sodomy statute touched "upon the most private human conduct, sexual behavior, and in the most private of places, the home," and attempted to "control a personal relationship that … is within the liberty of persons to choose without being punished." Thus, the Court held that adults are entitled to participate in private, consensual sexual conduct. While the opinion in Lawrence was framed in terms of the right to liberty, Kennedy described the "right to privacy" found in Griswold as the "most pertinent beginning point" in the evolution of the concepts embodied in Lawrence.