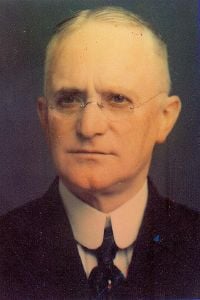 George Eastman (July 12, 1854 – March 14, 1932) invented roll film and an easy-to-operate camera that he brand-named the Kodak. He founded the Eastman Kodak Company, which manufactured cameras and photographic supplies, and made the art of photography accessible to the masses. His business success was founded on a combination of good practices, including attractive benefits for his employees and desirable products for his customers. During his lifetime, he donated $100 million, mostly to the University of Rochester, Rochester Institute of Technology, and the Massachusetts Institute of Technology. Yet, during an illness in his later years, he ended his life by suicide.

Eastman was born in Waterville, Oneida County, New York. He was the fourth and youngest child of George Washington Eastman and Maria Kilbourn, both from the bordering town of Marshall. His third sister died shortly after her birth. In 1854, his father established the Eastman Commercial College in Rochester, and the Eastman family moved to Rochester in 1860. Two years later, his father died. To make up for the lost income from his father, Eastman took odd jobs while his mother took in boarders. Eastman left high school to support the family and, by the age of 14, began working as an office boy at an insurance agency.[1] Because of his superior job performance, his employer helped him get a better paying job at a bank.

Eastman is said to have encountered photography while preparing for a vacation in the Caribbean. Someone suggested to him that he bring a camera to record the sights. He canceled his vacation but purchased the equipment and started taking photographs.

In 1878, Eastman became frustrated by the awkward method that required coating a glass plate with a liquid emulsion that had to be used before it dried. He read an article about British inventor Charles Bennett, who had developed a dry method of photography. Eastman experimented with his own method and invented a dry photographic plate, which he patented in both England and the United States. In 1881, he went into a partnership with Henry Alvah Strong, called the Eastman Dry Plate Company.

In 1884, with the help of William H. Walker, he developed, and then patented, a photographic medium that replaced fragile glass plates with a photo-emulsion coated on paper rolls. The invention of roll film greatly sped up the process of recording multiple images.[2]

He accordingly changed the name of his company to the Eastman Dry Plate and Film Company.

An advertisement for the Kodak camera.

Eastman then designed a roll film camera that could capture images more than two inches across. He patented the device in 1888. To market the camera, he coined the phrase "You press the button, we do the rest." The owner could return the camera to the company with a processing fee of $10, and the company would develop the film and return 100 pictures, along with a new roll of 100 exposures.[3]

On September 4, 1888, Eastman registered the trademark Kodak. The letter "K" had been a favorite of Eastman's, as he believed it was pronounced in the same way in all languages. He and his mother devised the name Kodak with an anagram set. He said that he used three principal concepts in creating the name: It must be short, it cannot be mispronounced, and it could not be associated with anything but Kodak.

Within a year, business was brisk, and the name of the firm was changed to the Eastman Kodak Company. In 1892, Eastman designed a new medium, celluloid film, to replace the old rolls of paper. He extended the use of his new film for use in Thomas A. Edison's new motion picture camera. By 1896, 100,000 Kodak cameras had been sold. The first Kodak had cost $25 (USD), but by 1900, Eastman designed and marketed a line of cameras ranging in price from the Bulls Eye for $12 to the Brownie for just one dollar.

Probably because of his early experience in the work world, Eastman followed a corporate philosophy of taking care of his employees. He provided them with many benefits, including pension plans and health care. He hired women professionals, as well as people with disabilities and former convicts. He paid employees for suggestions to improve the company, and implemented a worker safety program. He also developed a stock ownership plan, and in 1919, distributed $6 million of Kodak shares to his employees.

Eastman kept his company going by investing heavily in research and development, and by hiring expert staff that could lead the company in profitable directions.

Having achieved his primary corporate goals, Eastman embarked on a program of philanthropy. He made an anonymous donation to the Massachusetts Institute of Technology of $3 million in 1912, and is said to have given the institute $20 million over his lifetime. In 1917, he began establishing dental clinics for children in the city of Rochester, where his company was headquartered. He expanded this program to include cities both in the United States and abroad where Eastman Kodak had manufacturing facilities.

Eastman built a mansion on 12 acres of land that still stands. He made trips to Africa to conduct safaris, and was fond of camping. He also busied himself in visiting the art galleries of Europe.

In 1928, he developed a spinal condition that left him increasingly debilitated, and in intense pain. He could no longer carry out even simple tasks without assistance, and his concern over people seeing him in this condition left him more and more isolated. He grew depressed, knowing he would likely be spending the rest of his life in a wheelchair, as his mother had done during the last two years of her life.

On March 14, 1932, after meeting with a gathering of company executives and friends and finalizing his will, Eastman shot himself in the chest and died. He left a suicide note that read, "To my friends. My work is done. Why wait? GE."[4] His funeral was held at St. Paul's Episcopal Church in Rochester. Eastman, who never married, is buried at Kodak Park in Rochester, New York.

Eastman's enormous business success resulted from a combination of good practices. Starting with his own inventiveness, he encouraged the inventive genius of others in his employ to come up with new and profitable products. He thus invested heavily in research and development. In addition, he provided his employees with many benefits and gave them ownership of Kodak shares. He also guided his product development toward what his customers were looking for.

He was also very generous with his wealth. During his lifetime, he donated $100 million, mostly to the University of Rochester and the Massachusetts Institute of Technology (under the alias "Mr. Smith"). In addition, the Rochester Institute of Technology has a building dedicated to Eastman, in recognition of his support and substantial donations. He endowed the Eastman School of Music of the University of Rochester. MIT has a plaque of Eastman (the rubbing of which is traditionally considered by students to bring good luck) in recognition of his donation. He also made substantial gifts to the Tuskegee Institute and the Hampton Institute.

Upon his death, his entire estate went to the University of Rochester, where his name can be found on the Eastman Quadrangle of the River Campus. His former home at 900 East Avenue in Rochester, New York was opened as the George Eastman House International Museum of Photography and Film in 1949. On the 100th anniversary of his birth in 1954, Eastman was honored with a postage stamp issued by the United States Post Office.