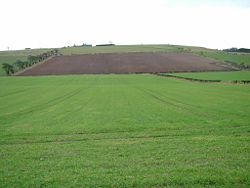 Western side of the battlefield, looking south-south-east from the monument erected in 1910. The Scottish army advanced down the plowed field, the English down the grassy field in the foreground, and they met, presumably at the valley boundary between the two fields.

The Battle of Flodden or Flodden Field was fought in the county of Northumberland, in northern England on September 9, 1513, between an invading Scots army under King James IV of Scotland and an English army commanded by Thomas Howard, 2nd Duke of Norfolk. It ended in a bloody defeat for the Scots. The Battle of Flodden entered Scottish folk memory as a day of senseless loss but also as a day of pride for their heritage of brave fighting men and patriots.

This conflict began when King James declared war on England, to honor the Auld Alliance; namely, to divert Henry VIII's English troops from their campaign against the French king Louis XII. England was involved in a larger conflict; defending Italy and the pope from the French, as a member of the "Catholic League" (Italian states). James of Scotland invaded England with an army of over 60,000 men. A recent book by the Scottish historian Niall Barr suggests that by the time he reached the battlefield this number had been reduced considerably, but this is contrary to the accepted view. James was faced by a much smaller English Army, probably numbering less than 30,000.

The battle actually took place near the village of Branxton, in the county of Northumberland, rather than at Flodden—hence the alternative name of Battle of Branxton. The Scots had previously been stationed at Flodden, near Branxton.

The battle was the climax of days of maneuvering. The English finally managed to cross the River Till, and got behind the Scottish positions. The Scots' cannon opened fire; but due to poorly-trained artillerymen, cumbersome guns and damp powder, mostly they missed. The more limber, and much better-trained, English artillerymen then returned fire, with deadly accuracy; blowing the Scottish guns and gunners off the field. The English cannons and longbow men then concentrated a furious fire upon the pikemen of the Scottish schiltrons. This took a terrible toll, and caused the Scots to charge down the hill and relinquish the defensive high ground, in order to come to grips with the English.

In many ways, Scottish tactics had changed little since Bannockburn fought in June earlier that year. They used the schiltron, a tight formation of long spears better suited for use against cavalry charges than for infantry melees. Nevertheless, it was a formation almost impossible to penetrate if the Scots could hold it in a steady advance. Unfortunately, they suddenly came across a burn or stream that had been hidden by the lie of the land. In attempting to cross, the schiltron formations began to break down. This was, perhaps, the turning point in the battle. The English infantry rushed forward and penetrated into the Scottish line. The English were mostly armed billmen, using a devastating weapon designed to tear armor and other forms of bodily protection apart. In the bloody slogging-match that characterized such warfare, the Scots were eventually encircled, and cut to pieces.

The king, many of his nobles, and over ten thousand Scotsmen were killed. The English losses are estimated at between 1,500 and four thousand.

Tactically, this battle was one of the first major engagements on the British Isles where artillery would play a decisive role, and one of the last decisive uses of English longbow men.

Many of these archers were recruited from Lancashire and Cheshire. Sir Ralph Asseton raised such a company from Middleton, near Manchester. In gratitude for his safe return, he rebuilt St. Leonard's, the local parish church. It contains the unique "Flodden Window" depicting each of the archers, and the priest who accompanied them, by name in stained glass.

Thomas Howard, 1st Earl of Surrey, was lieutenant general, and was largely responsible for the Tudor victory for Henry VIII of England. Howard was subsequently restored to his father's title of "Duke of Norfolk."

Skirmishes over the English-Scottish border had been taking place for centuries; and this was perhaps the longest such "war" on record.

There was not a noble family in Scotland who did not lose someone at Flodden. They and the other dead are remembered by the song (and pipe tune) "The Flowers of the Forest":

We'll hae nae mair lilting, at the yowe-milking,
Women and bairns are dowie and wae.
Sighing and moaning, on ilka green loaning,
The Flowers of the forest are all wede away

The song is rarely performed except on Armistice Day and at military funerals. The dead are heroes, and their bravery is legendary. Steve McGrail writes that “Flodden remains a painful and unresolved issue in the national psyche” ([1]). De Villo (2002) says that the song speaks of “senseless loss” ([2]).

The fields in which the battle was fought and the nearby countryside is an example of a drumlin swarm, with the drumlins themselves clearly visible from the field's monument.

Significance of the Battle

James IV's invasion of England was considered folly by many of his subjects. They had won their independence from England at the famous Battle of Bannockburn (1314) and many felt that this invasion endangered their autonomy. It would be through James VI of Scotland's succession to the English throne as James I of England that Scotland and England would become the United Kingdom, not by military conquest. The Battle of Flodden is part of the national folk memory of Scotland, remembered with anguish and even pain.

The dead of Flodden are sometimes seen as having paid the ultimate price in the name of Scottish culture and Scottish identity, which has been regarded as in danger of extinction. Some say that Scottish people must not become “Flowers of the Forest,” but live to protect their heritage, which the dead cannot do. The “Flowers of the Forest,” though, can engender a sense of pride and the desire not to allow their sacrifice to lose its value. For some, Flodden, which saw the death of the “Flower” of the Scots (including a popular king), ended the golden period of Scottish history. James' body was never found.