Fatimah binte Muhammad or popularly Fatimah Zahra (Fatima the Gracious) (Arabic: فاطمة الزهراء) (Born Friday twentieth of Jumada al-akhir in Mecca – fourteenth Jumada al-awwal or third Jamadi-ul-Assani at Medina) was the daughter of the Muslim prophet Muhammad from his first wife Khadijah. Together with the "mothers of the believers," that is, the wives of the Prophet, Fatimah is one of the most revered women in the history of Islam. As Muhammad's daughter, she was mother of his grandsons.

Her descendants, designated "Sayyid," have an honorable place among all Muslims; some have been respected scholars or deeply spiritual men, and many have exercised power. The royal houses of Jordan and Morocco are "sayyids," and the former family was for centuries guardian of the sacred cities of Mecca and Madinah. A branch of her family ruled Egypt as the Fatimid Dynasty between 969 and 1171, claiming the title of caliph. The family of the Aga Khan, leader of the believing community called the Ismailis, also descends from her lineage. Although descent from Muhammad is not a condition for leadership within the Sunni world, such a claim has often, in practice, considerably strengthened rulers' credibility and has enhanced their status.

Fatima was born in Mecca around 614 (Shi'a tradition) or 606 C.E. (Sunni tradition). In 624, she was married to her father's cousin, Ali ibn Abi Talib, who, after her death whould to come into power after the Sunni Caliph Uthman. She was buried privately in Jannat al-Baqi.Fatimah was survived by two sons, the second and third Shi’a Imams Hassan ibn Ali and Hussain ibn Ali and two daughters, Umm Khultum binte Ali and Zaynab binte Ali.

Muslims universally regard her as a loving and devoted daughter, mother, and wife, a sincere Muslim, and an exemplar for Muslim women. It is believed that she was very close to her father Muhammad and that her distinction from other women is mentioned in many of his Hadiths: "Fatima is a part of my flesh: whoever causes her to be upset, upsets me." Sahih Bukhari[1] Fatimah's children, Muhammad's grandsons, became the second and third Shi’a Imams. Hassan ibn Ali and Husayn ibn Ali were very dear to their grandfather. Shi'a and Sunni Muslims generally agree on these basic facts, but place very different importance and emphasis on other aspects of her life.

The Sunni view of Fatima

According to Sunni historians, Fatima Zahra binte Mohammed was the youngest of four daughters whom Khadijah bore to the Muslim Prophet, Muhammad. She died of natural causes, at the age of 23 or 24, surviving her father by only a few months. Due to differences of opinion regarding whether or not her husband, Ali, should have been the leader of the Muslim community after Muhammad's death, most Sunni historians do not accept the accounts of her injuries and miscarriage at the hands of Umar, who became the second Caliph over Ali.

The Shi'a view of Fatima

According to some Shi'a scholars, Fatima Zahra binte Mohammed was Muhammad's only daughter, though this position is not universal. The Sunni belief that he had other daughters by Khadijah denies Ali ibn Abi Talib, the main role model in Shi'a Islam, the distinction of being Muhammad's only son-in-law.

Shi'as generally hold the view that Muhammad's young wife, Aisha, was at odds with both Fatimah and her husband Ali and that Aisha resented the relationship between Fatimah and Ali. Tensions between the two were also put in terms of A'ishah's feelings about Muhammad's high regard for Fatimah, as she was the only daughter of his beloved and deceased first wife, Khadijah binte Khuwaylid. Political tensions add another dimension, as Muhammad's loyalty was to both Ali, as his son-in-law, and to his friend and Companion Abu Bakr, who also happened to be A'ishah's father.

When Muhammad died, a series of conflicts took place and Abu Bakr, attained the leadership of the Muslim community in what Shi'as consider a coup d'état. The Shi'a believe that Muhammad had wanted Ali to succeed him and that his familial relationship to Muhammad secured this, but that his wishes were ignored. Sunnis believe that Abu Bakr was rightfully elected by the community. After Abu Bakr assumed leadership, he asked the Muslims to promise an oath of allegiance to him, as was the custom of the time. Those who supported Ali refused to do so.

According to the Shi'a view, Umar ibn al-Khattab, who became Caliph after Abu Bakr died, was not only one of Abu Bakr's most zealous supporters, but also his co-conspirator and in some cases his superior. Umar led a party of armed men against Ali's house in Medina and called for Ali and his men to come out and swear allegiance to Abu Bakr, whom they had decided would take power in the meeting at Saqifah. Thus, the conflict and split between Sunnis and Shi'as resulted from this initial disagreement about authority over the community.

According to the Shi'a view, the conspirators succesfully seized power. They proceeded by depriving Fatimah of certain financial means: The land of Fadak, a gift from Muhammad to her before the Conquest of Mecca was confiscated and any inheritance due to her was denied on the basis of a saying attributed to Muhammad and attested by Abu Bakr stating that "prophets and their family members do not inherit."

Fatimah opposed this confiscation, and contested Abu Bakr's statements: She still had the merit of being Muhammad's daughter. Even though Fatimah and Ali succesfully contested Abu Bakr's claim, Abu Bakr refused to return her property. Fatimah made one last attempt: she interruped Abu Bakr's speech in the mosque of Medinah, with a long speech of her own. After this speech, Abu Bakr repented and went to return the deed to the land. However, he was prevented from doing so by Umar, and Fatimah was unable to reclaim the deed.

This caused a major breach in their relations, and Fatimah refused to speak to Abu Bakr after the incident, a detail which Sunni historical sources confirm Sahih Bukhari, Sahih Muslim (collection of hadith, sayings and deeds of Muhammad).

Shi'as further contend that some time later, it became evident that Fatimah whould not be recovering from injuries obtained during the raid on Ali's house. She was a leading figure in the community, as Muhammad's biological daugher and mother of his only grandchildren. Abu Bakr and Umar went to her house, and asked permision to enter. Fatimah refused to answer them, but eventually the door was opened by Ali. Abu Bakr wanted to improve the relations, but Fatimah was angered that Abu Bakr was not going to return to her her property. Angrily, she said that she "would curse him in her every prayer."

Fatima did not survive long after the demise of her father. Sources differ as to whether she passed away one or six months after Muhammad. According to the Shi'as, before her death she made these requests of her husband:

The Shi'as believe that Fatima died at the age of 18 in Medina. 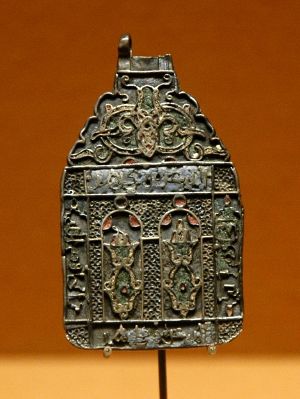 The term Al-Zahra means the Lady of Light. The khamsa, an popular amulet believed by some off evil and widely used in the Maghreb, represents the hand of Fatima. Although Sunnis also revere Fatimah because of her relationship to Muhammad as well as Ali (who eventually became the fourth Caliph), because of her centrality to the Shi'a view, it was Shi'as who established many titles of praise for her.

Shi'as regard Fatima Zahra binte Mohammed as the greatest woman who ever lived, the leader of all women in Paradise, and the model of female virtue. She was the wife of the first Shi'a Imam, the mother of the second and third, and therefore the ancestress of all the succeeding Imams.