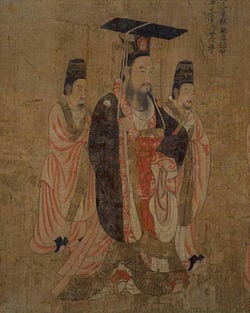 Emperor Wen of Sui (541 C.E. – 604 C.E.), known as Wen·di, personal name Yang Jian, was the founder and first emperor of China's Sui Dynasty. He was a hard-working administrator and a micromanager. As a Buddhist, he encouraged the spread of Buddhism through the state; however, his government officially supported Confucianism. He founded the Sui dynasty, which continued until 619 C.E. when the first Tang ruler came to power. During the Sui dynasty's brief reign, China's Great Wall was rebuilt, land use was reformed and the gap between rich and poor was reduced. Buddhism was used to unify China's diverse groups.

Emperor Wen of Sui was definitely one of the most public leaders in Chinese history. Burdened with many responsibilities, he behaved as a Confucianist Perfect Gentleman and never complained. He seized power not for himself but for the sake of the nation. Wen may well have been the most suitable person for the role of the emperor at that time, which he deserved purely by merit. Emperor Wen was a visionary individual and possessed definite integrity of character. First of all, he never allowed himself to succumb to the vices of the flesh, although his position placed them within easy reach. Moreover, his leadership was not stained by bloodshed, as was the case with so many other emperor-reformers. He had the ability to win wide public support for his reforms—no small accomplishment. However, his son's failure to continue his work was largely of Wen's own making.

Yang Jian was an official in the Northern Zhou Dynasty who seized power in 581 C.E. When the womanizing Emperor to the Northern Zhou dynasty died an untimely death, the next Emperor became Wendi's grandson through his daughter, who was the Empress and the official wife of the late Emperor (he had five Empresses). At this time Yang Jian was already in charge of the day-to-day runnings of the imperial court in the capital, because the late Emperor was not interested in governing directly. Yang Jian was appointed to be one of the two regents for the six-year old boy and after suppressing a revolt by his co-regent in command of the armies of the east. He seized the throne for himself, establishing the new Sui dynasty. His son, Yang, however, is generally considered to have been an evil ruler [1] and another general, Li Yuan (Tang Taizong), rebelled against him to establish the Tang dynasty.[2]. Technically, the Sui dynasty ended in 618 because Tang Taizong initially ruled in the name of two puppet Sui emperors.

After seizing the throne, Wendi declared himself the rightful possessor of the Mandate of Heaven. Since the ruler against whom he had rebelled had no interest in matters of governance and could not properly claim to have the people's interests at heart, Yang Jian's seizure of power was justified within Chinese political thinking. He invaded the Chen Dynasty in the south to reunite northern and southern China. Before invading, he distributed propaganda flyers in the south, declaring that the Chen ruler had lost the Mandate of Heaven because of his decadent rule, which eased the conquest of the south.

His first accomplishment was to consolidate governmental administration and centralize the political system. He established a more efficient two-body government to replace the existing three-tier system, and created three departments and six ministries for state supervision. Wendi took steps to breach the social gap between rich and poor, and to reduce corruption and encourage union of Chinese states. Political officials became qualified based on merit rather than blood, and imperial examinations were instituted. Elite-class privileges, which had long been part of the social system in the northern dynasties, fell. Capable officials from the south were welcomed to join his government.

Wendi is usually thought to have been strangled at the hands of his son, who had been stripped of his title after being caught raping one of Wendi's concubines. However, some people believe he died of illness.

In this reign, the land-equalization system was created, distributing land equally based on household size, with more land for larger families. However, existing landholders were allowed to keep their property, and land could not be sold off, only farmed. Taxes on farmers and merchants were relaxed, as well, and overall the period became very agriculturally productive.

Wendi saw the beginning of the construction of the Grand Canal. This huge project had the purpose of uniting northern and southern China with improved transport. It was completed in the reign of his son, Yangdi. Another project of his time was the improvement and expansion of the Great Wall.

As an Emperor Wendi is famous for his "Kai Huang Lü" which became the basis for all legal codes of subsequent dynasties of China until the overthrow of the Qing in 1911.

Generally speaking, Wendi's reign was a great period of prosperity not seen since the Han Dynasty. Economically, the dynasty prospered out of its ruins. It is said that there was enough food stored for 50 years. The military was also powerful. At the beginning of his reign, there was the Great Turkish Horde, a few other minor barbarian hordes to the north, Tibetan tribes to the west, Goguryeo in the northeast, and a Vietnam kingdom encroaching on Sui lands from the south. By the time Wendi finished his reign, the Great Turkish Horde has split into the Eastern and Western hordes, and the only possible threat that remained was the Eastern Turks. The Western Turks were too far in the west from Central China to be a threat. A lot of the small hordes were subdued. Though Eastern Turks were still a threat, Wendi gave Sui the clear advantage. Eventually, in the beginning of Yangdi's reign, the Eastern Turks will temporary become a vassal of the Sui (Eastern Turks officially break that vassal relationship in 615 when the Turks attacked and surrounded Yangdi at Yianmen). Unfortunately, his successor-Yangdi practically ruined all that work.

Wendi is also famous for having the least amount of concubines for an adult Chinese Emperor who have ruled so long. Wendi had only two concubines, and those are only after his empress and longtime wife died. Tang Taizong, founder of the dynasty that succeeded him, by comparison, is said to have over 3,000 concubines in his palaces.