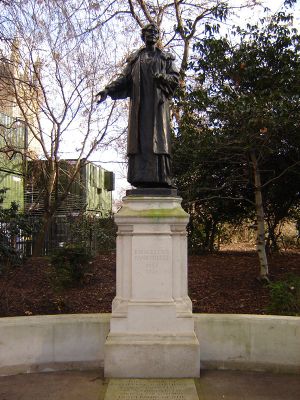 Statue of Emmeline Pankhurst in Victoria Tower Gardens next to the Houses of Parliament, Westminster. (January 2006)

Emmeline Pankhurst (July 14, 1858 – June 14, 1928) was one of the founders of the British suffragette movement and one of Britain's most influential women. More than any other, the name, "Mrs. Pankhurst" is associated with the struggle for the enfranchisement of British women in the period immediately preceding World War I. In order to achieve voting rights for women, she used direct action. Women's enfranchisement would probably have been granted at some point in Britain's future but, without her efforts, it may have taken a great deal longer. Switzerland, considered by many to be the quintessential enlightened state, did not vote for woman's suffrage until 1971. Sometimes direct action can convince those who exercise power to recognize certain groups' equal human rights, such as the right of self-determination, freedom from discrimination or the basic right to vote in a democratic society.

She was born Emmeline Goulden in Manchester, England, to abolitionist and successful businessman Robert Goulden and feminist Sophia Crane. Emmeline's mother began taking her to suffrage meetings when she was a young teenager.

Even though her parents had very progressive ideas in politics, their ideas on education were conventional. After she attended school in Manchester, at the age of fifteen her parents sent her to a finishing school in Paris.

Emmeline returned to Manchester from Paris in 1878. Shortly there after, she met Dr.Richard Marsden Pankhurst, a lawyer and committed socialist. Dr. Pankhurst was already a supporter of women's suffrage. He had drafted an amendment to the Municipal Corporation Bill of 1869 that gave unmarried women heads of household the right to vote in local elections, and was the author of the Married Women's Property Acts of 1870 and 1882.[1]

In spite of a twenty-one year age difference, Richard and Emmeline were attracted to one another. Her father, Richard Goulden, gave his blessing and the couple married in Salford in 1879.[2]

As a Poor Law Guardian, Emmeline made regular visits in 1895, to a local workhouse. She was shocked by the miserable conditions and suffering of the inmates. Her concern about the treatment of the women served to reinforce her conviction that women's suffrage was the answer to solving these social problems.

Both Richard and Emmeline were very active in the Independent Labour Party. Richard ran unsuccessfully several times for the House of Commons. Sadly, his political career, Emmeline's activism, and their life together were interrupted when Richard fell ill and died of a perforated ulcer in 1898.[3]

Following Richard's passing, Emmeline resumed her political activism. Over the next few years, she became increasingly disillusioned with the established women's political organizations' ability to bring about change. In 1903, she founded the better-known Women's Social and Political Union. Initially, Emmeline's vision for the organization was the recruitment of working class women to work for the right to vote. The organization later became famous for its militancy, which began in 1905, with acts of civil disobedience. Members included Annie Kenney, Emily Wilding Davison, who was killed by the King's horse in the 1913 Epsom Derby as the result of a suffragette protest, and the composer Dame Ethel Smyth.[4]

Emmeline was joined in the suffragette movement by her daughters, Christabel Pankhurst and Sylvia Pankhurst, both of whom made a substantial contribution to the campaign in different ways.[5] Christabel and colleague Annie Kenney committed one of the first acts of civil disobedience by the WSPU in London during the fall of 1905, at a talk by Sir Edward Grey, a government minister. As he spoke, the two women cried out "Will the Liberal Government give votes to women?" The women refused to stop shouting and so were thrown out of the meeting by police. A struggle with police ensued and the women were arrested and charged with assault.

Christabel and Annie were found guilty and fined but refused to pay their fines. They were sent to prison, shocking the nation. This was the first time that British women had resorted to violence while trying to win the vote.

Pankhurst's younger daughter, Adela Pankhurst emigrated to Australia, where she was politically active first in the Communist Party of Australia and then the fascist Australia First Movement.[6]

Mrs. Pankhurst's tactics for drawing attention to the movement led to her being imprisoned several times. Because of her high profile, at first she did not endure the same deprivations as many of the imprisoned working-class suffragettes. However, she did experience force-feeding after going on hunger strikes on various occasions. Emmeline's acts of civil disobedience inspired many women, but her approach to the campaign did not endear her to everyone. There were splits within the movement as a result.

Her autobiography, My Own Story, was published in 1914.

Support for the war effort

In 1914, the First World War broke out. Emmeline and her colleagues felt that nothing should interfere with Britain's efforts to win. All attempts to gain votes for women were put on hold. Her efforts were directed to urging women to take over men's jobs, so that the men could go and fight in the war. With backup from David Lloyd George, she organized a parade of 30,000 women, using £2,000 funding from the government, to encourage employers to let women take over men's jobs in industry. In 1916, this allowed the government to draft all able-bodied men into the armed services.

"Characteristically, Mrs. Pankhurst threw all her energies and all her influence into the effort, which now, designated itself pro-war and pro-conscription. Although, not all of the members of the suffrage movement backed the war, Mrs. Pankhurst’s influence swayed many to follow her lead. Giving its energies wholly to the prosecution of the War, it rushed to a furious extreme, its Chauvinism unexampled amongst all the other women’s societies" (Pankhurst, Sylvia 593).

Enlistment of the un-enlisted was of the highest priority. As Sylvia Pankhurst points out in her chronicle, The Suffragette Movement, her mother and sister rallied their followers in an effort to reroute the militant momentum which they had so successfully orchestrated in the struggle for suffrage:

On September 8, 1914, Christabel re-appeared at the London Opera House, after her long exile, to utter a declaration, not on women’s enfranchisement, but on "The German Peril." Mrs. Pankhurst toured the country, making recruiting speeches. Her supporters handed the white feather to every young man they encountered wearing civilian dress, and bobbed up at Hyde Park meetings with placards that said, "Intern Them All."

Britain started to implement voting rights for women in the same year as Ireland, in March 1918. The Representation of the People Act 1918 only gave voting rights to women over 30, and that with a property qualification. In contrast, all men over 21 were enfranchised. Nevertheless The Suffragettes saw it as a great victory. In November 1918, women over 21 were given the right to become Members of Parliament. This led to a situation where a woman could be an MP even though she was too young to vote. Women finally achieved equal voting rights to men in the UK in 1928.

Emmeline Pankhurst died at the age of 69, ten years after seeing her most ardently pursued goal realized. Her name is often a "house name" in British schools, where she serves as an example of a woman who changed the world.

Retrieved from https://www.newworldencyclopedia.org/p/index.php?title=Emmeline_Pankhurst&oldid=1096600
Categories:
Hidden category:
This page was last edited on 21 January 2023, at 10:23.
Content is available under Creative Commons Attribution/Share-Alike License; additional terms may apply. See Terms of Use for details.