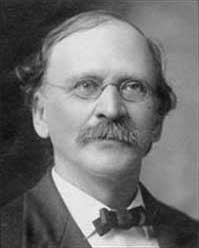 Edward Williams Morley (January 29, 1838 – February 24, 1923) was an American physicist and chemist. He is best known for an experiment in which he collaborated with Albert Abraham Michelson, to determine whether the speed of light was affected by the Earth's orbital movement through space. The results of the experiment led to rejection of the theory that light is transmitted through a medium, or ether. The implications of the Michelson-Morley experiment have been widely discussed from the time its results were published in 1887 to the present day. Morley was a seminary graduate as well as a scientist, and for a time was a Congregational Church minister.

Morley was born in Newark, New Jersey, the eldest son of Sardis Brewster Morley and Anna Clarissa Treat. He was schooled at home until he was almost 20, when his family moved to Williamstown, Massachusetts, so that he and his three brothers could attend Williams College, his father's alma mater. Morley graduated from Williams College with a bachelor of science in 1860, and the following year entered Andover Theological Seminary. He continued studying at Williams, earning a masters in 1863, and graduated from Andover in 1864. As the American Civil War had not yet ended, Morley traveled to Fort Monroe, Virginia, where he was assigned duty on the Sanitary Commission, which took care of the medical needs of troops.

After the Civil War, Morley taught at South Berkshire Academy in Marlboro, Massachusetts, and married Isabella Ashley Birdsall in 1868. Although a man of deep personal faith, he did not sermonize with enthusiasm. He remained an active supporter of the Congregational Church throughout his life, and was often asked to address congregations (Hamerla 2006, 4). At his father's prompting, he accepted a position as minister at a Congregational Church in Twinsburg, Ohio. In 1869, he became the Hurlbut Professor of Chemistry and Natural History at Western Reserve College in nearby Hudson, Ohio. He accepted the position at Western Reserve on condition that he could preach at the University chapel (Asimov 1982).

When he arrived at the college, the only equipment available in the college laboratory was an alcohol lamp and a Wollaston's logarithmic slide rule for calculating atomic weights, along with a few bottles and flasks. He was supplied some funding to upgrade the laboratory, and laboratory classes became mandatory for all chemistry students. Morley's duties also required him to teach all mathematics for the freshman year.[1]

Composition of the Atmosphere

Morley's first important experiments related to the conjecture by the astronomer Elias Loomis, who had also been a professor at Western Reserve, that cold spells are due to an exchange between the lower and upper atmosphere, rather than to cooler currents from colder regions of the Earth migrating to warmer regions. John Dalton, father of the chemical atomic theory, had suggested that the percentage of oxygen in the lower atmosphere should be greater than in the upper atmosphere, since oxygen had a higher density than other atmospheric components such as nitrogen. Although this difference had not been detected, Morley believed that if Loomis's conjecture were true, the atmosphere in a cold spell would contain less oxygen than otherwise.

Morley refined some equipment originally developed by Regnault and Frankland, and was able to make more accurate determinations of the oxygen content. He found that during cold spells measured in Hudson, there was indeed a fluctuation in the oxygen content as predicted by Dalton. His equipment enabled him to make measurements with an error of less than one-hundredth of one percent. The results of his work were reported at a meeting of the American Association for the Advancement of Science in Saratoga Springs, in 1879.[2]

In 1882, Western Reserve was moved to Cleveland, Ohio, and Morley continued his teaching duties there. On the way back from a scientific meeting in Montreal, Morley spoke with Albert Abraham Michelson, who taught at Case, also in Cleveland. They discussed collaborating on an experiment that Michelson had performed in the early 1880s, to determine whether the speed of light was affected by the Earth's movement through the hypothetical medium (ether) that was believed to transmit light waves. Michelson had set up an elaborate apparatus to test this hypothesis, but it was wanting in accuracy, and the circumstances under which he performed the experiments were less than ideal.

Their work was delayed when in 1885 Michelson suffered a mental breakdown and spent time in New York City recovering. In 1886, a fire at Case destroyed Michelson's laboratory facilities, and Morley offered his for the experiment. The two received funding to complete an improved apparatus, which was constructed by Morley, rather than being out-contracted to a firm, as Michelson had been in the habit of doing. In 1887, they succeeded in establishing results that showed no change in the speed of light, regardless of the direction in which it was measured relative to the Earth's orbital motion.

Around the same time, Morley worked with Michelson to study the feasibility of using the wavelength of sodium light as a standard of length.

Measuring the atomic weight of oxygen

During this period, Morley had developed a strong interest in Prout's hypothesis,[3] that the atomic weights of the elements were simple integral multiples of that of hydrogen. To test this hypothesis, Morley experimentally determined the quantity of hydrogen that combined with oxygen to form water, using a new apparatus designed specifically for this purpose.

Morley reported his results at the 1890 meeting of the American Association for the Advancement of Science (AAAS). He had found the density of oxygen to be 15.884 times that of hydrogen, thus failing to meet the criteria of Prout's hypothesis by a small amount. This discrepancy was later resolved by positing that more than one form of oxygen existed, each having the same chemical properties but a different atomic weight, those atomic weights, however, being integral multiples of that of hydrogen, as Prout had suggested.

Morley also tested the laws of combining volumes of hydrogen and oxygen, and found that the ratio of one to the other in the formation of water was 2.0005. As this result was not consistent with other determinations of the density of oxygen and hydrogen, Morley revised his experiments and reported a measure of 15.879 for the atomic weight of oxygen, and 2.00269 for the ratio of hydrogen gas to oxygen gas that combine to form water.

Morley continued to conduct research on the speed of light apart from Michelson, and found that light travels faster in the presence of a magnetic field. He was given a grant by the AAAS to continue his experiments.[4]

In addition, Morley collaborated with W.A. Rogers to determine the expansion of steel using the Michelson interferometer.

In 1904-1905, Morley collaborated with Dayton C. Miller to repeat the 1887 measurement of the ether drift. Their results were the same as those achieved in the earlier experiment.

Morley retired from Western Reserve in 1906, from then on undertaking minor research from a laboratory in his home, where he performed chemical analyses of minerals.

He was awarded the Davy Medal of the Royal Society, the Elliot Cresson Medal of the Franklin Institute, and the Willard Gibbs Medal of the Chicago section of the American Chemical Society. His name was constantly in the literature because of the historic experiments he performed with Michelson, because of the rise in importance of the theory of relativity.

While Morley accomplished important work on his own, including determination of the atomic weight of oxygen and the development of laboratory apparatus, he will be remembered mainly for his work with Albert Michelson. It was his good fortune to live in the same city as Michelson and to have the experimental background and the facility to build laboratory equipment that were required. Michelson was constantly pitching his idea to other scientists, in the hope that one or other would understand its importance. Morley, perhaps out of Christian charity as much as because he had the expertise, was willing to lend a hand. He did not win the Nobel Prize as Michelson did, but Michelson's fame also rests with his collaboration with Morley.

One lesson here is that we do not live in a vacuum, and that by finding the right partner, it is often possible to accomplish what would otherwise be merely a hope or intention.