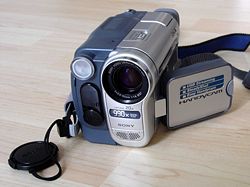 The Sony DV Handycam is a camcorder based on digital video technology.

Digital video is a type of video recording system that works by using a digital video signal rather than an analog one. (The terms camera, video camera, and camcorder are used interchangeably in this article.) Digital videos can be copied multiple times, with practically no degradation in quality, and they can be edited using readily available hardware and software. Also, the tape stock for digital video costs significantly less than 35 mm film. Digital video is used not only for digital television (including HDTV) but also for mobile phones, video conferencing systems, and the Internet distribution of media.

Early experiments with digital video were performed during the 1960s, by the research departments of institutions such as the British Broadcasting Corporation (BBC) and Bell Laboratories. The goal was to eliminate or minimize the noise and distortion on video feeds for television sent over the terrestrial microwave relay and coaxial cable circuits of the day.

From the late 1970s to the early 1980s, several types of video production equipment were introduced that operated by taking a standard analog video input and internally digitizing it. Examples included time base correctors (TBC) and digital video effects (DVE) units. These systems made it easier to correct or enhance the video signal, as in the case of a TBC, or to manipulate and add effects to the video, as in the case of a DVE unit. The digitized and processed video from these units would then be converted back to standard analog video.

Later, in the 1970s, manufacturers of professional video broadcast equipment—such as Bosch (through their Fernseh division), RCA, and Ampex—developed prototype digital videotape recorders in their research and development labs. However, none of these early machines were marketed commercially.

Digital video was first introduced commercially in 1986, with the Sony D-1 format, which recorded an uncompressed standard definition component video signal in digital form instead of the high-band analog forms that had been commonplace until then. Due to the high cost, D-1 was used primarily by large television networks. It was eventually replaced by cheaper systems using compressed data, most notably Sony's Digital Betacam, still heavily used as a field recording format by professional television producers.

Consumer digital video first appeared in the form of QuickTime, Apple Computer's architecture for time-based and streaming data formats, which appeared in crude form around 1990. Initial consumer-level content creation tools were crude, requiring an analog video source to be digitized to a computer-readable format. Although low-quality at first, consumer digital video rose rapidly in quality, first with the introduction of playback standards such as MPEG-1 and MPEG-2 (adopted for use in television transmission and DVD media), and then with the introduction of the DV tape format.

These innovations made it possible to record directly to digital data, simplifying the editing process, and allowed non-linear editing systems to be deployed cheaply and widely on desktop computers, with no external playback or recording equipment needed. The widespread adoption of digital video has also drastically reduced the bandwidth needed for a high definition television signal (with HDV and AVCHD, as well as several commercial variants such as DVCPRO-HD, all using less bandwidth than a standard definition analog signal) and tapeless camcorders based on flash memory, often a variant of MPEG-4.

Digital video cameras come in two different image capture formats: Interlaced and progressive scan. Interlaced cameras record the image in alternating sets of lines—that is, the odd-numbered lines and even-numbered lines are scanned in alternating fashion. Each set of odd or even lines is referred to as a "field," and a pairing of two consecutive fields of opposite parity is called a "frame."

A progressive scanning digital video camera records each frame as distinct, with both fields being identical. Thus, interlaced video captures twice as many fields per second as progressive video does when both operate at the same number of frames per second. Thus, video has a "hyper-real" look because it draws a different image 60 times per second, whereas film records 24 or 25 progressive frames per second.

Progressive scan camcorders (such as the Panasonic AG-DVX100) are generally more desirable because of the similarities they share with film. They record frames progressively, producing crisper images. They can both shoot at 24 frames per second, which results in motion strobing (blurring of the subject when fast movement occurs). Thus, progressive scanning video cameras tend to be more expensive than their interlaced counterparts. (Although the digital video format allows for only 29.97 interlaced frames per second (or 25 for PAL), 24 frames per second progressive video is possible by displaying identical fields for each frame, and displaying 3 fields of an identical image for certain frames.)

Digital video can be copied with no degradation in quality. No matter how many generations a digital source is copied, it will be as clear as the original first generation of digital footage.

Digital video can be processed and edited on a non-linear editing (NLE) station, a device built exclusively to edit video and audio. This type of device may import from analog as well as digital sources, but it is not intended to do anything other than edit videos. Digital video can also be edited on a personal computer with the proper hardware and software. Using an NLE station, digital video can be manipulated to follow a sequence of video clips. Avid's software and hardware are almost synonymous with the professional NLE market, but Apple’s Final Cut Pro, Adobe Premiere, Sony Vegas, and similar programs are also popular.

Digital video is generally edited on a setup with ample disk space. Digital video applied with standard DV/DVCPRO compression takes up about 250 megabytes per minute or 13 gigabytes per hour.

Many types of video compression exist for serving digital video over the internet, and onto DVDs. Although digital technique allows for a wide variety of edit effects, most common is the hard cut and an editable video format like DV-video allows repeated cutting without loss of quality, because any compression across frames is lossless. While DV video is not compressed beyond its own codec while editing, the file sizes that result are not practical for delivery onto optical discs or over the internet, with codecs such as the Windows Media format, MPEG2, MPEG4, Real Media, the more recent H.264, and the Sorenson media codec. Probably the most widely used formats for delivering video over the internet are MPEG4 and Windows Media, while MPEG2 is used almost exclusively for DVDs, providing an exceptional image in minimal size but resulting in a high level of CPU consumption to decompress.

The video manufacturing community defines one standard for resolution after another, although the devices use incompatible resolutions. They insist on their resolution and rescale a video several times from the sensor to the LCD.

As of 2007, the highest resolution demonstrated for digital video generation is 33 megapixels (7680 x 4320) at 60 frames per second ("UHDV"). This resolution, however, has been demonstrated only in special laboratory settings. The highest speed has been attained in industrial and scientific high speed cameras that are capable of filming 1024x1024 video at up to 1 million frames per second for brief recording periods.

Videos can now be edited on readily available, increasingly affordable hardware and software. Even high-budget films, such as Cold Mountain, have been edited entirely on Final Cut Pro, Apple's nonlinear editing software.

Digital video costs significantly less than 35 mm film, as digital tapes can be erased and re-recorded multiple times, viewed on location without processing, and the tape stock itself is far less expensive than 35 mm film. (As of December 2005, a 60-minute MiniDV tape cost about $3 each when bought in bulk. By comparison, 35 mm film stock cost about $1,000 per minute, including processing.)

Digital video is useful outside of movie-making. For example, digital television (including higher quality HDTV) started to spread in most developed countries in the early 2000s. Digital video is also used in modern mobile phones and video conferencing systems. In addition, it is used for the Internet distribution of media, including streaming video and peer-to-peer movie distribution.

Many interfaces have been designed specifically to handle the requirements of uncompressed digital video (at roughly 400 Mbit/s):

The DVB-ASI interface has been designed for carrying MPEG-Transport compressed video.

Current formats, listed below, are PCM (pulse-code modulation) based. (Pulse-code modulation (PCM) is a digital representation of an analog signal, where the magnitude of the signal is sampled regularly at uniform intervals, then quantized to a series of symbols in a numeric (usually binary) code.)