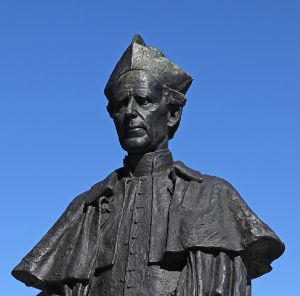 Daniel Patrick Mannix (March 4, 1864 – November 2, 1963) was an Irish-born Australian Catholic priest, Archbishop of Melbourne for 46 years, and one of the most influential public figures in twentieth century Australia. Mannix was the son of a tenant farmer near Charleville, in County Cork, Ireland and was educated at Irish Christian Brothers schools and at the prestigious St Patrick's College, Maynooth seminary, where he was ordained as a priest in 1890.

In 1895 he was appointed to the chair of Moral theology, and in 1903, not yet 40 years old, he was appointed president of St. Patrick's seminary—in effect becoming the intellectual head of Irish Catholicism. Although he was an outspoken Irish nationalist, he disapproved of violence against the British authorities, and personally welcomed Edward VII and George V during their visits to the college.

Mannix was devoted to the Roman Catholic teaching of the sanctity of all members of humanity. He opposed violence and other forms of injustice from all sides. He urged pacifism and supported the causes of the Labor Party and trade unionism. He openly opposed Australian involvement in World War I and the conscription of Australia's youth to fight in that war. He stood in opposition to militancy and strikes. He also opposed Industrial Workers of the World (IWW) and the Communist Party of Australia however. True to his priesthood, on all matters of personal and sexual morality, Mannix maintained a lifelong position as a traditionalist and upheld the authority of the Roman Catholic Church. He maintained his authority as Archbishop of Melbourne and lived until four months before his 100th birthday.

Mannix was consecrated titular Bishop of Pharsalia and Coadjutor to Archbishop Thomas Carr of Melbourne in Maynooth College Chapel on July 1, 1912. Melbourne was one of the great centers of Irish emigration. The Roman Catholic Church's population there was almost entirely Irish. In Australia at this time, the Irish Catholics were commonly treated with disdain by the Anglo-Scottish Protestant majority, and also as potentially disloyal. Mannix was thus regarded with suspicion from the start, and his militant advocacy on behalf of a separate Roman Catholic school system, in defiance of the general acceptance of a secular school system, immediately made him a figure of controversy.

Australia entered World War I in 1914 on the side of the Allies and Great Britain. Shortly afterward, Mannix denounced the war referring to it as, "just a sordid trade war." He was considered a traitor by many, even those among his own constituency. When the Australian Labor Party government of Billy Hughes tried to introduce conscripted service for the war, Mannix campaigned vigorously against it and the conscription bill was defeated. Mannix spoke out more frequently about the 1917 Australian referendum, which was also defeated. The extent to which Mannix influenced the outcome of the vote has been the cause for some debate, but that he was influential is beyond dispute.

When the Australian Labor Party split over conscription, Mannix supported the Catholic-dominated anti-conscription faction, led by Frank Tudor, although Tudor was not himself a Catholic. Among the Catholic politicians whose careers Mannix encouraged were James Scullin, Frank Brennan, Joseph Lyons and, later, Arthur Calwell. In 1917, when Carr died, Mannix became Archbishop of Melbourne.

Mannix opposed the Easter Rising in 1916 and condemned the use of force by Irish nationalists. He counseled Australians of Irish Catholic extraction to stay out of Irish politics. However his speech became increasingly radicalized, and in 1919 he led an Irish republican funeral cortège through the streets of London following the death of hunger striker Terence MacSwiney, a Lord Mayor of County Cork, Mannix's native county.

By the end of World War I Mannix was the recognized leader of the Irish community in Australia, lionized by Catholics but detested by most Protestants, including those in power federally and in Victoria. For many years he was ostracized and not invited to official functions to which his position would have been entitled.

Following the war, Mannix formed the Irish Relief Fund, which provided financial support for the families of those Irish Republicans shot or imprisoned by the British. When he left Australia in 1920, to visit Rome and the United States of America, the British government refused him permission to visit Ireland or British cities with large Irish populations, which resulted in his extended stay in Penzance. There was also a serious, though unsuccessful, move to prevent him returning to Australia.

Despite the powerful enemies he made in England and other countries, he continued to support trade unionism but as a staunch pacifist, opposed militancy and strikes. In the 1920s he became outspoken in opposition to the Industrial Workers of the World (IWW) and the Communist Party of Australia. On all matters of personal and sexual morality, he maintained a lifelong position as a traditionalist and upheld the authority of the Roman Catholic Church.

In Melbourne, Mannix was regarded as the political leader of the city's largest ethnic minority as well as its religious leader. From his palatial house, Raheen, in Kew, Melbourne, he would daily walk to and from St. Patrick's Cathedral, personally greeting any of his flock that he encountered. On official engagements he was chauffeured about in a large limousine. In 1920 he led an enormous St Patrick's Day parade with a guard of honor made up of Irish Australian Victoria Cross recipients.

After the Irish Free State was created in 1922, Mannix became less politically involved. Thus he became less controversial and animosity toward him gradually faded for the most part. From the 1930s he came to see Communism as the main threat to the Roman Catholic Church and he became increasingly identified with political conservatism. He was a strong supporter of Joseph Lyons, who left the Labor Party in 1931 and led the conservative United Australia Party in government from 1932 until 1939, although he continued to support Catholics such as Arthur Calwell in the Labor Party.

Mannix's best-known protégé in his later years was B.A. Santamaria, a young Italian-Australian lawyer, whom Mannix appointed head of the National Secretariat of Catholic Action in 1937. After 1941, Mannix authorized Santamaria to form the Catholic Social Studies Movement, known simply as The Movement, to organize the unions and defeat the Communist Party candidates. The Movement was so successful in its efforts that by 1949 it had taken control of the Victorian branch of the Labor Party.

In 1951 the Liberal Party of Australia government of Robert Menzies held a referendum to give the government the constitutional power to ban the Communist Party. Mannix surprised many of his supporters by opposing this, on the grounds that it would give the Communists a propaganda victory and drive them underground. His influence may have been a decisive influence in the referendum's narrow defeat. This alliance with the Labor leader, Dr. H.V. Evatt however was short-lived.

The Labor Party split again in 1954 over attitudes to Communism and the Cold War. Santamaria's supporters were expelled and formed the Democratic Labor Party (DLP). Mannix covertly supported the DLP and allowed many priests and religious clerics to work openly for it. This involvement in politics was opposed by the Roman Catholic head of the Australian Church, Norman Cardinal Gilroy, Archbishop of Sydney, and by the Vatican. Pope Pius XII and the College of Cardinals appointed Archbishop Justin Simonds as Mannix's coadjutor. From that point onward, Simonds was widely viewed as Rome's representative in Melbourne.

In 1960 Arthur Calwell became the Labor Party leader and sought Mannix's support to bring about a reconciliation between Labor and the Democratic Labor Party, essential if Robert Menzies' government was to be defeated. Some figures in the DLP supported this idea, but Mannix continued his support for B.A. Santamaria in his resistance to such suggestions. The negotiations fell through, Menzies was re-elected in 1961. As a result, Mannix and Calwell became permanently estranged.

By the 1960s the distinct identity of the Irish community in Melbourne was fading, and Irish Catholics were increasingly outnumbered by Italian immigrants to Australia, along with Maltese and other postwar immigrant Catholic communities.

Mannix, who turned 90 years old in 1954, remained active and in full authority, but he was no longer a central figure in the city's politics. He died suddenly in November 1963, aged 99, while the Church was preparing to celebrate his 100th birthday four months later.

Although he was considered a traitor by many becasue he opposed Australia entering World War I in 1914. His campaign against the bill supporting Australian conscription the Australian plebiscite of 1917 caused these bills to be defeated. In the case of the former many young men did not have to face the horrors of open warfare unwillingly. It is held by some that the extent to which Mannix influenced the outcome is debatable, but that he was influential is beyond dispute. From the 1930s he came to see Communism as the main threat to the Roman Catholic Church and he became increasingly identified with political conservatism. Mannix maintained a lifelong position as a traditionalist and upheld the authority of the Roman Catholic Church. He maintained his authority as Archbishop of Melbourne and lived until four months before his 100th birthday.

Corpus Christi College, Australia's oldest surviving seminary, was founded by Daniel Mannix on Christmas Day, 1922. Mannix had dreams for a national seminary along the lines of Maynooth, but had to abandon those plans to reform St. Mary's Seminary of Manly, New South Wales when the Holy See Pius XII ruled in favor of regional seminaries for Australia.

Daniel Mannix was the subject of a five part dramatized documentary, Turbulent Priest, written by Gerry McArdle and transmitted on RTÉ Radio 1.

Retrieved from https://www.newworldencyclopedia.org/p/index.php?title=Daniel_Mannix&oldid=1071179
Categories:
Hidden category:
This page was last edited on 24 June 2022, at 00:27.
Content is available under Creative Commons Attribution/Share-Alike License; additional terms may apply. See Terms of Use for details.