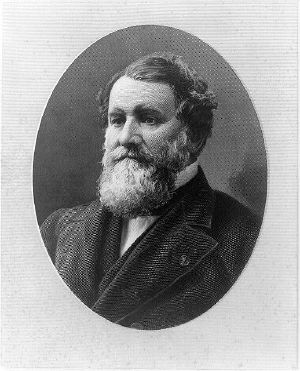 Cyrus Hall McCormick, Sr. (February 15, 1809 – May 13, 1884) was an American inventor and founder of the McCormick Harvesting Machine Company, which became part of International Harvester Company in 1902.[1] Among other honors, McCormick was was elected a corresponding member of the prestigious French Academy of Sciences, "as having done more for the cause of agriculture than any other living man." He invented a machine that positively benefited the world economy. It helped to bring about the mechanization of the agricultural industry, making it possible to harvest more food to feed a hungry world. All 36 wheat producing countries in the world made use of his Reaper, which has been described as, "the liberator of the land-serf in twenty countries, and the bread-machine of one half of the human race."[2] It also freed up workers to be employed by the Industrial Revolution and the Union Army during the American Civil War.

A philanthropist and committed Christian, McCormick founded the McCormick Theological Seminary in Chicago. Too often, those who are gifted with the ability to innovate in science or in technology fail to place their skills at the service of humanity. Instead, what they invent is either destructive, potentially destructive, or adds nothing to human welfare. McCormick may well have been guided by his Calvinist faith, which stresses self-denial, sobriety, thriftiness, efficiency, and morality, which can result in high production and low consumption, creating a surplus that cannot be consumed, which is instead invested for the greater glory of God. McCormick decided at an early age that he wanted to fight hunger and saw this as a Christian task.

Cyrus McCormick was born on the McCormick family farm in Woodridge, Virginia, in the Shenandoah Valley on the western side of the Blue Ridge Mountains. His parents were, Mary Ann Hall and Robert Hall McCormick. His siblings included Leander J. McCormick and William Sanderson McCormick. His father, the inventor Robert Hall McCormick, worked for 16 years on a horse-drawn reaper. However, he was not able to finish his project and stopped developing it. Cyrus was given the project and developed a final version of the reaper in two months. The reaper was demonstrated in tests in 1831, and was patented by Cyrus in 1834.[1]

In 1847, Cyrus and his brother, Leander, moved to Chicago, where they established large centralized works for manufacturing agricultural implements; they were joined by their other brother, William, in 1849. The McCormick reaper sold well, partially as a result of savvy and innovative business practices. Their products came onto the market just as the development of railroads offered wide distribution to distant market areas. He developed marketing and sales techniques, developing a vast network of trained salesmen able to demonstrate operation of the machines in the field. William H. Seward said of McCormick's invention that owing to it "the line of civilization moves westward thirty miles each year." One of the company's most famous advertisement featured an epic painting by Emanuel Leutze with the slogan, "Westward the Course of Empire Takes Its Way with McCormick Reapers in the Van."

McCormick also owned the Times and Herald newspapers in Chicago, writing numerous editorial calling for the North and the South to reconcile themsleves, trying to explain the South's viewpoint to the North, and vice-versa.[3] He was also a peace-maker, and once the war began he visited both sides to try to "bring the severed nation back to union," proposing a peace-plan that called for a Board of Arbitration between the two sides which would examine the causes of the war and identify "a just basis on which both sides could agree to disband their armies and reestablish peace."[4]"He actually believed," says Casson, "that he could establish peace." He was also a strong supported of Church Unity, which he believed would strengthen the hands of those who worked for peace, calling for "mutual forbearance and the pursuit of those things which tend to peace."[5] McCormick pioneered the idea of an international mechanism to control the production and distribution of food

Numerous prizes and medals were awarded for his reaper, and he was elected a corresponding member of the French Academy of Sciences, "as having done more for the cause of agriculture than any other living man." The invention of the reaper made farming far more efficient, and resulted in a global shift of labor from farmlands to cities. In 1855, his machine won the Grand Medal at the Paris Exhibition.

McCormick died in Chicago, in 1884, he had been an invalid for the last three or four years of his life.[11] The company passed on to his grandson, Cyrus Hall McCormick III.[1] The McCormick factories were later the site of urban labor strikes that led to the Haymarket Square riot in 1886. One of the reasons the employees were striking was because they were earning only $9 a week.

Cyrus McCormick's papers are held by the Wisconsin Historical Society.

McCormick invented a machine that would have great impact for the world economy. In his own life-time, 36 wheat producing nations in the world used his Reaper, and increased their productivity. His machine has been described as "the liberator of the land-serf in twenty countries, and the bread-machine of one half of the human race."[12] His machine lowered the cost of bread, enabling more people to purchase this basic food. His machine helped to bring about the mechanization of agriculture and could be utilized to feed world populations. It also helped to reduce the manpower required in agricultural pursuits and freed up more workers to be employed by the Industrial Revolution and the Union Army during the Civil War. The reaper was not the first implement of its kind, but McCormick effectively perfected the instrument and built a large corporation from its marketing and sales.[13] He hated hunger, and made eliminating this his life's work; "he picked up the task of feeding the the hungry masses—the Christly task that had lain unfulfilled for eighteen centuries, and led the way in organizing it into a system of international reciprocity."[14]

McCormick was a devout Christian. His favorite Bible passage was Romans chapter eight, which promises that nothing can separate people from God's love.[15] What he believed, and what he did, were related; "He was a man of faith and works" and "felt that he was born into the world with certain things to do," the main task being to combat hunger.[16]

Hutchinson says that McCormick "believed that religion was a remedy for all the ill of life," "contributed generously to the Church and was instrumental in increasing its influence and membership." He supported many Presbyterian organizations and founded the McCormick Theological Seminary in Chicago (by paying for an existing seminary in Indiana to be transferred to Chicago).[17] He was also active within the Democratic Party. The Farm in Virginia is now the Cyrus McCormick Farm Museum. Casson compares McCormick with Abraham Lincoln:

It is interesting to note how closely the destinies of Lincoln and McCormick were interwoven. Both were born in 1809, on farms in the south. Both struggles through a youth of adversity and first came into prominence in Illinois. Both labored to preserve the Union, and when the War of Secession came to an end it was the Reaper that enabled Lincoln to feed his army. Both mere were emancipators; the one from slavery and the other from famine; and both today sleep under the soil of Illinois. No other two Americans had heavier tasks than they, and none worked more mightily for the common good.[18]