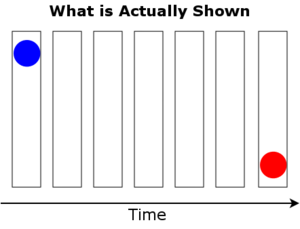 These illusions are distortions of sensory input, revealing how the brain organizes and interprets the information we receive from the world. Through studying this type of illusion scientists are able to discover how our minds function in informing us about the environment. In addition to providing ways to research human abilities, illusions like the color phi phenomenon intrigue and entertain people, reflecting our cognitive curiosity and appreciation for creativity that is part of human nature. 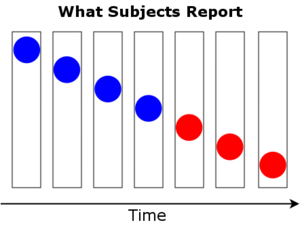 Subjects report seeing a dot that moves from the top to the bottom. The dot changes color midway through its path.

The color phi phenomenon is based directly on beta movement, a type of phi phenomenon. In beta movement, two or more identical images located in different areas are flashed in sequence, making it appear as though the object or shape in the image moves from one position to another. The color phi phenomenon was discovered when the philosopher Nelson Goodman wondered if such a sense of motion would persist if the two alternating images were different colors, as well as what would happen to the perception of the object's color. Intrigued by these questions, psychologists Paul Kolers and Michael von Grunau investigated the effects of color upon beta movement.[1]

One of the most intriguing aspects of the color phi phenomenon is that viewers report a color change midway between the two flashing images, before the second image is actually shown. Logically, it is impossible for a subject to actually experience the color change before the second dot has been presented. On the other hand, some psychologists have argued that this should not be surprising. Hoffman noted that our perception is a construction, and thus a construction that differs from the actual physical stimulation is not unusual:

Philosopher Daniel Dennett, who is known for his consciousness studies as well as his work on intentionality, artificial intelligence, and free will, has postulated theories as to how this is possible. Dennett discards both the idea that memory is altered to include a change of color after the second color is flashed, as well as the idea that memories are stored briefly until they are edited and brought into consciousness. He proposes a theory of consciousness that he calls a "Multiple Drafts Model," which he explains by using the color phi phenomenon. With this theory, experience is a "web of words and deeds," and any sense of a sequential order of events is due to probing this web or stream of experience at certain points. Dennett's argument, however, is somewhat vague, and often challenged by critics. Some suggest that future advancements in brain imaging techniques may make it clear exactly how the brain processes information and explain why the color phi phenomenon exists.[3]

The color phi phenomenon provides an interesting example for formulating and testing theories on how consciousness works, as well as how the brain functions. Additionally, it is provides an intriguing experience for the general public to discover the complexity of our ability to relate to the world that surrounds us.

Retrieved from https://www.newworldencyclopedia.org/p/index.php?title=Color_Phi_phenomenon&oldid=1003644
Categories:
Hidden category:
This page was last edited on 11 March 2017, at 00:40.
Content is available under Creative Commons Attribution/Share-Alike License; additional terms may apply. See Terms of Use for details.