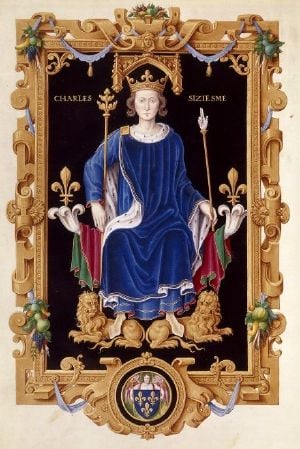 Charles VI the Well-Beloved, later known as Charles VI the Mad (French: Charles VI le Bien-Aimé, later known as Charles VI le Fol) (December 3, 1368 – October 21, 1422) was King of France (1380–1422) and a member of the Valois Dynasty. The Hundred Years’ War continued throughout his reign. Despite his illness and credulity, he managed to reign for over 40 years. His illness resulted in a fascination for alchemy and the occult. However, he also had some concern for the welfare of the commoners of France, and included non-aristocrats among his own counselors.

The agreement he made with England, which passed the crown to Henry VI of England, so inspired Joan of Arc that she determined to restore France's independence and defeat the English. Without Charles VI, there would not have been a Joan of Arc, whose resistance against what was experienced as English oppression personifies the French spirit and the French sense of cultural identity.

Charles was born in Paris, France, the son of King Charles V and Jeanne de Bourbon. In 1380, at the age of 11, he was crowned King of France in the cathedral at Reims. Until he took complete charge as king in 1388, France was ruled by his uncle, Philip the Bold. His uncle raised taxes and also overspent money from the treasury to pay for the war with England. In 1382, many French peasants revolted against the high taxes and Charles decided to assume responsibility himself. In 1388, with the help of his brother, Louis of Orléans (1371–1407), he took control of the government, appointing his own advisors including some non-aristocrats.

Charles VI was known both as Charles the Well-Beloved and later as Charles the Mad, since, beginning in his mid-twenties, he experienced bouts of psychosis. These fits of madness would recur for the rest of his life. Based on his symptoms, doctors believe the king may have suffered from schizophrenia, porphyria or bi-polar disorder.

His first known fit occurred in 1392 when his friend and advisor, Olivier de Clisson, was the victim of an attempted murder. Although Clisson survived, Charles was determined to punish the would-be assassin Pierre de Craon who had taken refuge in Brittany. Contemporaries said Charles appeared to be in a "fever" to begin the campaign and appeared disconnected in his speech. Charles set off with an army on July 1, 1392. The progress of the army was slow, nearly driving Charles into a frenzy of impatience.

While traveling through a forest on a hot August morning, a barefoot man dressed in rags rushed up to the king's horse and grabbed his bridle. "Ride no further, noble King!" he yelled. "Turn back! You are betrayed!" The king's escorts beat the man back but did not arrest him, and he followed the procession for a half-hour, repeating his cries.

The company emerged from the forest at noon. A page who was drowsy from the sun dropped the king's lance, which clanged loudly against a steel helmet carried by another page. Charles shuddered, drew his sword and yelled "Forward against the traitors! They wish to deliver me to the enemy!" The king spurred his horse and began swinging his sword at his companions, fighting until his chamberlain and a group of soldiers were able to grab him from his mount and lay him on the ground. He laid still and did not react, falling into a coma. The king killed at least one knight in his delirium, and possibly more (the exact numbers differ in the chronicles from the time).

Charles's uncle, Philip II, assumed the regency on the spot, dismissing Charles' advisers in the process. This was to be the start of a major feud which would divide the Kings of France and the Dukes of Burgundy for the next 85 years.

Did you know?
Charles VI of France suffered from mental illness throughout his life, including the delusion that he was made of glass

The king would suffer from periods of mental illness throughout his life. During one attack in 1393, Charles could not remember his name, did not know he was king, and fled in terror from his wife. He did not recognize his children, though he knew his brother and councilors and remembered the names of people who had died. In later attacks, he roamed his palaces howling like a wolf, refused to bathe for months on end, and suffered from delusions that he was made of glass.

Mackay describes how Charles VI as “one of the most credulous princes” of his day, “whose court absolutely swarmed with alchymists, conjurors, astrologers, and quacks of every description.” Charles made several attempts, he says, to discover the philosopher's stone, which was believed to turn lead into gold.[1]

In January 1393, Queen Isabeau de Bavière organized a party to celebrate the marriage of one of her ladies-in-waiting. The king and five other lords dressed up as wild men and danced about chained to one another. The king's brother, Louis of Valois, Duke of Orléans, approached with a lighted torch. One of the dancers caught fire and there was panic. The Duchesse de Berry, who recognized Charles, threw her robe over him and saved his life. Four of the other men perished. This incident became known as the Bal des Ardents (the 'Ball of the Burning Men').

Most accounts seem to agree that Louis's action was an accident; he was merely trying to find his brother. Be that as it may, Louis soon afterwards pursued an affair with the Queen and was murdered by his political rival John, Duke of Burgundy (also known as John the Fearless) in 1407.

Charles's royal secretary Pierre Salmon spent much time in discussions with the king while he was suffering from his intermittent but incapacitating psychosis. In an effort to find a cure for the king's illness, stabilize the turbulent political situation, and secure his own future, Salmon supervised the production of two distinct versions of the beautifully illuminated guidebooks to good kingship known as Pierre Salmon's Dialogues.

Charles VI's reign was marked by the continuing war with the English (the Hundred Years' War). An early attempt at peace occurred in 1396 when Charles's daughter, the seven-year-old Isabella of Valois married the 29-year-old Richard II of England.

The peace in France did not last. The feud between the Royal family and the house of Burgundy led to chaos and anarchy. Taking advantage, Henry V of England led an invasion which culminated in 1415 when the French army was defeated at the Battle of Agincourt. In 1420 Charles—now utterly incapacitated by his disease—signed the Treaty of Troyes which recognized Henry as his successor, declared his son a bastard and betrothed his daughter, Catherine of Valois, to Henry. Many citizens, including Joan of Arc, believed that the king only agreed to such disastrous and unprecedented terms under the mental stress of his illness and that, as a result, France could not be held to them.

Charles VI died in 1422 at Paris and is interred with his wife, Isabeau de Bavière in Saint Denis Basilica. Despite his madness, he had reigned for over 50 years.

He was eventually succeeded by his son Charles VII. Ironically, Catherine of Valois passed Charles's mental illness onto her son, Henry VI, and his inability to govern helped spark the Wars of the Roses.

The story "Hop-Frog, or The Eight Chained Ourang-Outangs" by Edgar Allan Poe involves a scene strikingly similar to the Bal des Ardents.

Retrieved from https://www.newworldencyclopedia.org/p/index.php?title=Charles_VI_of_France&oldid=1067672
Categories:
Hidden category:
This page was last edited on 15 April 2022, at 14:53.
Content is available under Creative Commons Attribution/Share-Alike License; additional terms may apply. See Terms of Use for details.