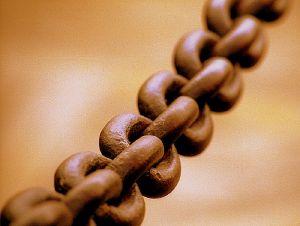 A broad metal chain made of torus-shaped links.

A chain is a series of connected links, usually made of metal. Chains are made for various purposes and therefore come in different shapes and styles. For example, some chains are designed for lifting (as with a hoist) or pulling a load, or for securing against theft (such as when securing a bicycle). Such chains have links that are torus shaped. Other chains are designed for transferring power in machines, conveyor belts, bicycles, and motorcycles. Such chains, known as roller chains, have links that mesh with the teeth of appropriately designed sprockets.

Chains can also be used for decorative purposes, as in jewelry. On a somber note, chains have also been historically used as devices to hold slaves and prisoners under restraint.

Types of chains and their uses

There are various types of chains designed for various uses. A number of them are listed below.

In addition to the above uses, some people wear wallets with chains attached to their belts, or pants decorated with chains. At times, a chain is used as a percussion instrument for special effects, such as in Schönberg's "Gurre-Lieder" and Janáček's "From the House of the Dead." Also, chains have been used to prevent the passage of ships through waterways, as was done with the Hudson River Chains during the American Revolutionary War.