Carl August Nielsen (June 9, 1865 – October 3, 1931) was a conductor, violinist, and the most internationally known composer from Denmark. He is especially admired for his six symphonies. His approach to sonata form, as seen in his symphonies, is one of gradual abandonment. In considering the first movements of each symphony in turn, the first two reveal Nielsen working fairly comfortably with the traditional confines of sonata form as latter nineteenth century composers saw it. The next two compositions include certain high-level references to the traditional sonata format but little of the detail. In his final two symphonies, he inhabits a completely new world. His creativity took him beyond the traditional to an entirely new level, where the structure of the movement in his final two sonatas can be understood only within the context of the material itself.

Nielsen was born one of twelve children in a poor peasant family in Sortelung on the Danish island of Funen, not far from the city of Odense. His father was a house painter and amateur musician. Carl first discovered music by experimenting with the different sounds and pitches he heard when striking the logs in a pile of firewood behind his home. His family was relatively poor, but he was still able to learn the violin and piano as a child. 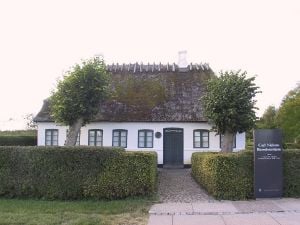 He also learned how to play brass instruments, which led to a job as a bugler in the 16th Battalion at nearby Odense. He later studied violin and music theory at the Copenhagen Conservatory, but never took formal lessons in composition. Nonetheless, he began to compose. At first, he did not gain enough recognition for his works to support himself. During the concert which saw the premiere of his first symphony on March 14, 1894 (conducted by Johan Svendsen), Nielsen played in the second violin section. However, the same symphony was a great success when played in Berlin in 1896, and from then his fame grew.

On April 10, 1891, Nielsen married the Danish sculptress Anne Marie Brodersen. They had met just a month before in Paris. The couple spent their honeymoon in Italy. They remained married until Nielsen's death, despite a long period of marital strife including a lengthy separation and mutual accusations of infidelity.

He suffered a serious heart attack in 1925, and from that time on he was forced to curtail much of his activity, although he continued to compose until his death. Also, during this period, he wrote a delightful memoir of his childhood called Min Fynske Barndom (My Childhood on Funen). He also wrote a short book entitled Living Music.

Did you know?
Carl Nielsen is widely recognized as Denmark's greatest composer

Internationally, Nielsen is best known for his six symphonies. Other well-known pieces of his are the incidental music for Oehlenschläger's drama Aladdin, the operas Saul og David and Maskarade, the concerti for flute, violin, and clarinet, the wind quintet, and the Helios Overture, which depicts the passage of the sun in the sky from dawn to nightfall. In Denmark, the numerous songs by various poets set to music by Carl Nielsen are known by all.

Nielsen's work may be characterized as broad in range of emotion, from the playful, sometimes almost soaring to reach new uncharted places of the heart, to the more mundane rhyme and rhythm of every day life, yet so often with a sparkle of fresh morning dew on grass. In his "Praludium" Nielsen deftly moves between the gentle softness of a warm spring day, with the rising sunlight lifting off the morning mist, with butterflies awakening and bees starting out for their daily chores, then on to the exploration of hills and dales newly discovered and majestic to behold in both their natural splendor and undiscovered surprises. Like his contemporary, the Finn Jean Sibelius, Nielsen studied Renaissance polyphony closely, which accounts for much of the melodic and harmonic "feel" of his music.

His music initially had a neo-classical sound but became increasingly modern as he developed his own approach to progressive tonality, moving from one key to another. Typically, he would end the piece in a different key. Nielsen frequently blended melodic passages inspired by folk music with more complicated stylings including counterpoint and modern variations.

Nielsen's works are sometimes referred to by FS numbers, from the 1965 catalog compiled by Dan Fog and Torben Schousboe.

Nielsen wrote six symphonies. His approach to sonata form, as seen in his symphonies, is one of gradual abandonment. In considering the first movements of each symphony in turn, the first two reveal Nielsen working fairly comfortably within the confines of sonata form as later nineteenth century composers saw it; the middle two include certain high-level references to sonata form but little of the detail, and the last two inhabit a completely new world of Nielsen's own devising, wherein the structure of the movement can only be understood within the context of the material he is working with. By that point in his output there are no more parallels with any other forms or past traditions of musical construction.

Symphony No. 1
Nielsen's early Symphony No. 1 in G minor already shows his individuality and hints at what Robert Simpson calls, "progressive tonality," by which he refers to Nielsen's habit of beginning a work in one key and ending in another. It was written at the same time as, and shares some qualities with, the Holstein songs of opus 10.
Symphony No. 2
A painting Nielsen saw at an inn, depicting the four temperaments (choleric, melancholic, phlegmatic, and sanguine), inspired him to write Symphony No. 2, "The Four Temperaments". It is in four movements, each illuminating one of the temperaments, but despite this apparent tendency toward being a suite of tone poems, it is a fully integrated symphony. It is not true "program music" but rather a group of general character sketches, and one need not know which temperament Nielsen is considering in order to appreciate the work as a whole.
Symphony No. 3
Symphony No. 3, "Espansiva" was premiered in the same concert as the Violin Concerto. The second movement contains wordless solos for soprano and baritone voices (which can be played by clarinet and trombone if voices are not available).
Symphony No. 4
Perhaps the best known of Nielsen's Symphonies is Symphony No. 4, "Inextinguishable". It is in four connected movements and is the most dramatic Nielsen had written to date. In the last movement, two sets of timpani are placed on opposite sides of the stage for a sort of musical duel.
Symphony No. 5
Symphony No. 5 is one of only two of Nielsen's symphonies that lack a subtitle (which for Nielsen in any case are only very general signposts of intent, not indicating specific story-telling qualities). Like No. 4, it has very dramatic use of percussion: At one point in the first movement—which itself consists of two large structures joined to one another—the snare drummer is instructed to improvise "as if at all costs to stop the progress of the orchestra." This symphony is the one by which Nielsen's music made its first significant post-war impact outside Scandinavia, when the Danish Radio Symphony performed it at the 1950 Edinburgh International Festival in Scotland, where it caused a sensation.
Symphony No. 6
Even Robert Simpson was at first confused by Nielsen's Symphony No. 6, "Semplice." It is not as obviously dramatic as the previous two and in some ways it strikes listeners as strange. For instance, the second movement is only scored for nine instruments of the orchestra (piccolo, 2 clarinets, 2 bassoons, trombone, and percussion) and represents Nielsen's commentary on trends in modern musical composition at the time (the mid-1920s). It is by far the most elusive of his symphonies to grasp, yet its very subtle architectural structure coupled with its enigmatic emotional tone make it a challenging, fascinating, and ultimately rewarding listening experience.

Carl Nielsen's works include the following:

Nielsen did not leave any recordings of his symphonies. However, three later interpreters, Thomas Jensen, Launy Grøndahl, and Erik Tuxen worked with him and their recordings are held to be the closest to 'authentic' Nielsen available.

Nielsen's reputation took considerable time to develop, especially beyond Denmark. Initially, international interest was largely directed towards his symphonies while his other works, many of them highly popular in Denmark, were largely ignored. His international breakthrough began in 1962 when Leonard Bernstein recorded Nielsen's Fifth Symphony with the New York Philharmonic Orchestra for CBS. In more recent times, especially in Europe and the United States, Nielsen's music is performed with increasing frequency. Beyond his six symphonies, Nielsen's Wind Quintet and his concertos for violin, flute, and clarinet have achieved international recognition. In Denmark, his opera Maskarade and a considerable number of his songs have become an integral part of the national heritage. For many years, he appeared on the Danish hundred-kroner banknote.

Many of Nielsen's students, both from his years teaching at the Royal Conservatory and from private students in his earlier days, have continued to influence classical music in Denmark.

Retrieved from https://www.newworldencyclopedia.org/p/index.php?title=Carl_Nielsen&oldid=1002665
Categories:
Hidden category:
This page was last edited on 12 January 2017, at 21:11.
Content is available under Creative Commons Attribution/Share-Alike License; additional terms may apply. See Terms of Use for details.