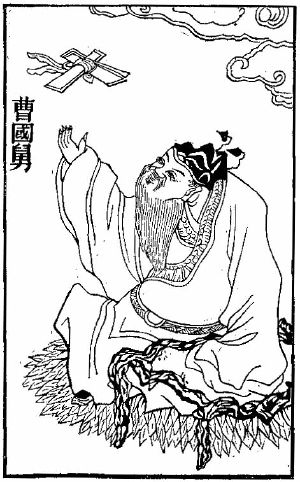 Cao Guojiu (曹國舅: meaning "Royal Uncle Cao") (Wade-Giles: "Ts'ao Kuo-ch'iu") is the newest (though not youngest) of the renowned Eight Immortal figures in Daoism. He is generally thought to have lived during the Song dynasty (960-1279 C.E.). As the brother of Empress Dowager Cao (曹太后: cáo tàihòu), he is the most aristocratic member of the Eight Immortals and can be seen to represent the feudal nobility.

In legendary accounts, Cao Guojiu is described as a natural ascetic who had no interest in the affairs of state preferring stillness and quiet contemplation to royal duties. In iconography, he is typically portrayed as an elderly man in an imperial cap, bearing a tablet that allows admission to the royal court.

Cao Guojiu is one of the illustrious Eight Immortals (Ba Xian), a group of Daoist/folk deities who play an important role in Chinese religion and culture. While they are famed for espousing and teaching Daoist philosophy and cultivation practices, they are also figures of popular myth and legend that are known for their devotion to the downtrodden and their collective lifestyle of “free and easy wandering.” Though they are most often depicted and described in the context of their group, each has their own particular set of tales, iconography, and areas of patronage.

The story of Cao Guojiu's ascent into the ranks of the immortals can be found in two rather different forms in the classical corpus.

In the first account, Cao is described as a shy, reticent man who was utterly uninterested in the political sphere, despite his noble birth. His antithesis was his younger brother, an utterly worldly and immoral man who loved nothing more than to exploit his royal position. After a particularly egregious episode involving another man's wife, Cao Guojiu attempted to counsel his brother and to convince him of the impropriety of his conduct. When this entreaty failed, the elder brother, utterly disgusted with the trappings of royalty and with its corrupting influence, fled the palace and took up residence in a cave. There he spent his days pondering nature, purifying his body and calming his mind. After several years of this renunciatory practice, he was surprised in his cave by Lu Dongbin and Zhongli Quan, who had arrived to test his progress:

The two elder immortals questioned him, saying: "Sir! We have heard you are going in for cultivation. What is it you are cultivating?" He replied: "I am cultivating Tao." They asked: "Where is Tao?" [Guojiu] pointed up to heaven. "Where is heaven?" they said. [Guojiu] pointed to his heart. The two [immortals] remarked, laughing: "Your heart is one with heaven, and heaven is one with Tao. You have indeed arrived at a profound understanding." Then they imparted to him the secret of reverting to a condition in perfect harmony with nature, and induced him to join the company of [immortals].[1]

In the second account, the listener is presented with a far more denigratory picture of the future immortal. As in the previous case, Cao Guojiu is described as an upright (though reticent) man who is troubled by the utterly unconscionable actions of his younger brother. However, when tested by circumstances, he fails utterly. Specifically, when he discovered that his brother has murdered a man in order to steal his wife, he ordered the imperial executioner to kill the woman, in order to silence any possible witnesses (and to avoid damaging the image of the family). Fortunately, the poor widow was miraculously saved by a god, which allowed her to petition the throne again. For a second time, Cao, in a fit of groveling panic, ordered her killed, and, for a second time, her life was spared by the gods. The widow then pled her case to the imperial censor, who had Cao Guojiu placed in the stocks and who ordered the execution of his younger brother. After months of suffering, Cao Guojiu was released, renounced all worldly possessions and became a hermit (and eventually an immortal).[2]

Cao Guojiu's example provides its listeners with two important lessons. In the first account, his story demonstrates that ethical, philosophical and spiritual fulfillment are not the province of the wealthy. In fact, following a precept laid out in the Zhuangzi, it seems that he must renounce his worldly responsibilities before he is able to concentrate on attuning himself with the Dao of Heaven and earth. In the second account, one can see a prototypical Daoist forgiveness story. Though Cao Guojiu was (at least initially) cowardly to the point of murder, he came to see the error of his ways and purposefully changed his life to avoid such actions in the future. Once he made these adjustments, he was a fit candidate to join the ranks of the immortals.

Cao Guojiu is typically depicted in the raiment of a member of nobility. He wears a cloth cap and is seen holding a jade tablet, which permits its bearer an audience with the emperor. He is also sometimes pictured with a pair of clapper castanets.[3]

While Cao Guojiu could be seen as a patron of the nobility, he (like Lan Caihe) is rarely, if ever, revered outside of the context of the eight immortals as a group.[4]

Retrieved from https://www.newworldencyclopedia.org/p/index.php?title=Cao_Guojiu&oldid=685340
Categories:
Hidden category:
This page was last edited on 3 April 2008, at 18:53.
Content is available under Creative Commons Attribution/Share-Alike License; additional terms may apply. See Terms of Use for details.