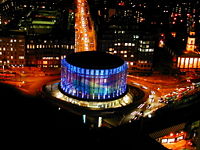 The British Film Institute (BFI) is one of the oldest film organizations in the world. It was established in 1933 in order to promote activities and education regarding film, television, and other moving images.

The BFI manages the British Film Institute National Archive (previously called the National Film Library), which is the world's largest film archive, the BFI Southbank (formerly the National Film Theater) and an IMAX theater. The British National Archive now holds and maintains over 275,000 feature, non-fiction and short films (dating from 1894) and 210,000 television programs. The BFI also runs the London Film Festival and offers a range of educational programs. In 2005, the BFI selected fifty films recommended for children, fourteen years old or under, based on the merits of the film regardless of the film's country of production. The selection was global in scope and included films from all over the world; it included only eight films from UK.[1] The American Film Institute in the U.S. was established in reference to the BFI. The BFI now makes substantial contributions in promoting, educating, and preserving film and television programs; the BFI requires continual financial support, which is in part provided by the British government.

The British Film Institute (BFI) is an organization established by Royal Charter to promote activities of film, television, and other moving images. The current charter (as amended and in effect from April 19, 2000) describes its mission as follows:

The institute was founded in 1933. Despite its foundation resulting from a recommendation in a report on Film and National Life, at that time the institute was a private company, though it has received public money throughout its history—from the Privy Council and Treasury until 1965 and the various culture departments since then. The institute was restructured following the Radcliffe Report of 1948 which recommended that it should concentrate on developing the appreciation of filmic art, rather than creating film itself. Thus control of educational film production passed to the National Committee for Visual Aids in Education and the British Film Academy assumed control for promoting production.

The institute received a Royal Charter in 1983. This was updated in 2000, and in the same year the newly-established UK Film Council took responsibility for providing the BFI's annual grant-in-aid (government subsidy) and acting, alongside the Charity Commission and the Privy Council, as its regulator.

In 1988 the BFI opened the London Museum of the Moving Image (MOMI) on the South Bank. MOMI was acclaimed internationally and set new standards for education through entertainment, but subsequently it did not receive the high levels of continuing investment that might have enabled it to keep pace with technological developments and ever-rising audience expectations. The Museum was "temporarily" closed in 1999 when the BFI stated that it would be re-sited. This did not happen, and MOMI's closure became permanent in 2002 when it was decided to redevelop the South Bank site. This redevelopment was itself then further delayed.

The BFI is currently managed on a day-to-day basis by its director, but the supreme decision-making authority rests with a chairman and a board of up to 14 governors. As of December 2008, the director is Amanda Nevill, and the chair is Greg Dyke, who took office on March 1, 2008. Gred Dyke succeeded the late film director Anthony Minghella, who was chair from 2003 until December 31, 2007. The chair of the board is appointed by the Secretary of State for Culture, Media and Sport who receives recommendations from the UK Film Council. Other board members are co-opted by existing board members when required. These appointments are subject to ratification by the UK Film Council.

The BFI operates with three sources of income. The largest is public money allocated through the UK Film Council from the funds given to it by the Department for Culture, Media and Sport. In 2007, this funding amounted to approximately £16m (23.8 million US dollars). The second largest source is commercial activity such as receipts from ticket sales at BFI Southbank or the BFI London Imax (2007, £5m; 7.4 million US dollars), sales of DVDs, etc. Thirdly, grants and sponsorship of around £5m (7.4 million US dollars) are obtained from various sources, including National Lottery funding grants, private sponsors and through donations (J. Paul Getty, Jr. donated around £1m (1.5 million US dollars) in his will following his death in 2003).

The BFI also devotes a large amount of its time to the preservation and study of British television programming and its history. In 2000, it published a high-profile list of the 100 Greatest British Television Programmes, as voted for by a range of industry figures.

The much-delayed redevelopment of the National Film Theatre finally took place in 2007, resulting in the "BFI Southbank" new education spaces, a gallery, and a pioneering mediatheque which for the first time enabled the public to gain access, free of charge, to some of the otherwise inaccessible treasures in the National Film & Television Archive. The mediatheque has proved to be the most successful element of this redevelopment, and there are plans to roll out a network of them across the UK.

The BFI has operated with the same level of government subsidy from 2004 through 2008 (a cut in real terms). Despite that, it has achieved considerable success. Its work at the National Film & Television Archive, though severely reduced by inadequate funding, is substantial. Its innovative digital and mediatheque strategies are achieving some success in making the archive accessible to those other than a tiny group of researchers, policies which are supported by its active DVD production work.

Recently the government announced a £25 million (37.2 million US dollars) capital investment in the National Archive Strategy was made by Secretary of State for Culture Media and Sport at the opening night of the 2007 London Film Festival. It is expected that the bulk of this money will pay for long overdue development of the BFI National Archive facilities in Hertfordshire and elsewhere. The BFI itself is lobbying for the award of £200 million (297.5 million US dollars) for the creation of a brand-new Film Center, to replace the near-life-expired facilities at the National Film Theater. The BFI runs the BFI Southbank (formerly the National Film Theatre (NFT)) and IMAX theater, both located on the south bank of the River Thames in London. The IMAX has the largest cinema screen in the UK, and shows popular recent releases and short films showcasing its technology, which includes 3D screenings and 12,000 watts of digital surround sound. BFI Southbank shows films from all over the world particularly critically-acclaimed historical and specialized films that may not otherwise get a cinema showing.

The BFI offers a range of education initiatives, in particular to support the teaching of film and media studies in schools[3] In 2005, the BFI selected fifty films that children should watch by the age of fourteen. The list was global in scope and it included films from all over the world and only eight UK films were listed. The top ten are:[1]

(see the next section for detail)

The BFI maintains the world's largest film archive, the BFI National Archive, previously called National Film Library (1935-1955), National Film Archive (1955-1992) and National Film and Television Archive (1993-2006). The archive contains more than 50,000 fiction films, over 100,000 non-fiction titles and around 625,000 television programs. The majority of the collection is British material but it also features internationally significant holdings from around the world. The Archive also collects films which feature key British actors and the work of British directors.

The collections held at the BFI National Archive were started in 1935 by Ernest Lindgren, the first curator of what was then called the National Film Library. It later changed its name to National Film Archive (1955-1992) and National Film and Television Archive (1992-2006). It now includes over 275,000 feature, non-fiction and short films (dating from 1894) and 210,000 television programs. In recent years the Conservation Centre has completed a number of much anticipated restorations of a diverse range of film titles. This has included the Mitchell and Kenyon collection, which consists almost entirely of actuality films commissioned by traveling fairground operators for showing at local fairgrounds or other venues across the U.K. in the early part of the twentieth century.

BFI National Archive collects, preserves, restores and then shares the films and television programs that have helped to shape and record British life and times since cinema was invented in the late nineteenth century. The majority of the collection is British material but it also features internationally significant holdings from around the world. The Archive also collects films which feature key British actors and the work of British directors.

The collections themselves are accommodated on several sites. The J. Paul Getty, Jr. Conservation Centre in Berkhamsted, Hertfordshire, named after its benefactor, is the base for much of the work, while approximately 140 million feet of flammable nitrate film is kept separately at a BFI storage site at Gaydon in Warwickshire. Film preservation is an ongoing project among filmmakers, historians, archivists, museums, and non-profit organizations to rescue aging film stock and preserve recorded images.

Films and television programs are acquired mainly by donation or, in the case of independent television, via funding direct from the TV companies. Emphasis is placed on British productions but whenever possible important and popular movies from overseas are also acquired.

The BFI publishes the monthly Sight and Sound magazine as well as DVDs and books. It runs the BFI National Library, a reference library, and maintains the SIFT (Summary of Information on Film and Television) database, which contains credits, synopses and other data on global film and TV. It also has a substantial collection of around seven million film and TV stills.