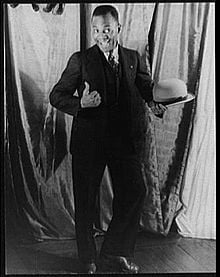 Bojangles (the name referred to his happy-go-lucky ebullience) starred in vaudeville, musical stage and movies. He invented the stair tap routine and is remembered for his appearances as trouper with the moppet Shirley Temple in four of her 1930s films.

Some jazz sources credit Bojangles as the chief instigator for getting tap dance literally "up on its toes." Early forms of tap, including the familiar "buck and wing," contained a flat-footed style, while Robinson performed on the balls of his feet with a shuffle-tap style that allowed him more flexibility to improvise. The technique won him notice and eventually made him a legend.

Born Luther Robinson in Richmond, Virginia, on May 25, 1878, the future "Bojangles" was orphaned in infancy and reared by a grandmother. He disliked his birth name, so he suggested to his younger brother Bill that they should exchange names. When the young Bill objected, Luther applied his fists, and the exchange was made. The new 'Luther' later adopted the name Percy and became a well-known drummer. The details of Robinson's early life are known mainly through legend, much of it perpetuated by Bojangles himself.

Robinson was married three times. Little is known of Robinson's first marriage to Lena Chase in 1907. They separated in 1916, and the marriage ended in 1922. His second wife was Fannie S. Clay whom he married shortly after his divorce from Chase. They divorced in 1943. His third marriage was to Elaine Plaines on January 27, 1944 in Columbus, Ohio. They remained together until Robinson's death in 1949. There were no children from any of the marriages.

Robinson was dogged by lifelong personal demons, enhanced by having to endure the indignities of racism that, despite his great success, still limited his opportunities. A favorite Robinson anecdote is that he seated himself in a restaurant and a customer objected to his presence. When the manager suggested that it might be better if the entertainer left, Robinson smiled and asked, "Have you got a ten dollar bill?" Politely asking to borrow the note for a moment, Robinson added six $10 bills from his own wallet and mixed them up, then extended the seven bills together, adding, "Here, let's see you pick out the colored one." The restaurant manager served Robinson without further delay.

Bojangles co-founded the New York Black Yankees baseball team in Harlem in 1936 with financier James "Soldier Boy" Semler. The team was a successful member of the Negro National League until it disbanded in 1948.

A notorious gambler with a big heart, he had a soft spot for anyone down on their luck or with a good story. During his lifetime Robinson spent a fortune, but his generosity was not totally wasted and his haunting memories of surviving on the streets as a child never left him. In 1933, while in his hometown of Richmond, Virginia, he saw two children risk speeding traffic to cross a street because there was no stoplight at the intersection. Robinson went to the city and provided the money to have a safety traffic light installed. In 1973, a statue of "Bojangles" was erected in a small park at that intersection.

Despite being the highest-paid black performer of the first half of the twentieth century, earning more than US$2 million during his lifetime, when Robinson died in 1949 he was penniless. He is buried in the Cemetery of the Evergreens, Brooklyn, New York.

Career as a dancer

At the age of sixteen, Robinson began dancing for a living, appearing as a "hoofer" or song-and-dance man in local beer gardens. A year later, young Bill quit school altogether to pursue dancing full-time. Two years later in Washington, DC, he began touring as a member of the Mayme Remington's "Pickaninnies." In his teens, Robinson joined various traveling companies and vaudeville tours, slowly building up a successful reputation in nightclubs and musical comedies. From 1902-1914, he teamed with tapper, George W. Cooper. Bound by the "two-colored" rule in vaudeville, which restricted blacks to performing in pairs, they performed together on the Keith and Orpheum circuits, but did not wear blackface makeup that performers customarily used.

In 1908 in Chicago, he met Marty Forkins, who became his lifelong manager. Under Forkins' tutelage, Robinson matured and began working as a solo act in nightclubs, increasing his earnings to an estimated $3,500 per week. He headlined with Cab Calloway many times at the famous Cotton Club in Harlem.

Having devoted his early career exclusively to appearances on the black theater circuit, Robinson would not dance for white audiences until he was 50-years-old. Toward the end of the vaudeville era, a white impresario, Lew Leslie, recruited Robinson for Blackbirds of 1928, an all-black revue for white audiences featuring him and an assortment of other black stars. From then on, Robinson's public role was that of a dapper, smiling, plaid-suited ambassador to the white world, maintaining a somewhat tenuous connection with the black show-business circles through his continuing patronage of the Hoofers Club, an entertainer's haven in Harlem. Consequently, blacks and whites developed differing opinions of him. To whites, his nickname "Bojangles" meant happy-go-lucky, while the black variety artist Tom Flatcher claimed it was slang for "squabbler."

After 1930, as black revues waned in popularity, Robinson remained a mainstay with white audiences in some 14 motion pictures produced by such companies as RKO, 20th Century Fox and Paramount Pictures. Most of these films had musical settings, in which he played old-fashioned roles in nostalgic romances. His most frequent role was that of an antebellum butler opposite Shirley Temple in such films as The Little Colonel (1935), The Littlest Rebel (1935), Rebecca of Sunnybrook Farm (1938) and Just Around the Corner (1938). Rarely did he depart from the stereotype imposed by Hollywood writers. However, in a small vignette in Hooray For Love (1935) he played a mayor of Harlem; in One Mile From Heaven (1937), he played a romantic lead opposite African American actress Fredi Washington after Hollywood had relaxed its taboo against such roles for blacks. 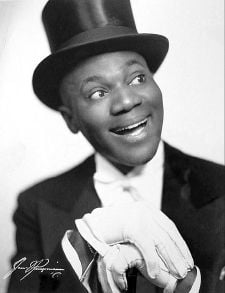 In 1939, he returned to the stage in The Hot Mikado, a jazz version of the Gilbert and Sullivan operetta produced at New York World's Fair. Thereafter, he confined himself to occasional performances, but he could still dance in his late sixties almost as well as he ever could, to the continual astonishment of his admirers. On his 61st birthday the much-loved performer danced his way backwards down Broadway from Columbus Circle to 44th Street.

In 1943, as a farewell to Hollywood, Robinson starred opposite Lena Horne and Cab Calloway in the quality film musical, Stormy Weather.

Robinson's unique sound came from using wooden taps. His direct claim to fame would be the creation of his famous "stair dance," which involved tapping up and down a flight of stairs both backwards and forwards. He claimed to have invented this dance on the spur of the moment when he was receiving some honor—he could never remember exactly what—from the King of England. Robinson claimed the king was standing at the top of a flight of stairs, and Bojangles' feet just danced up to be honored.

The publicity that gradually came to surround Robinson included his successful gambling exploits, his bow ties of multiple colors, his generosity, his ability to run backward (he set a world's record of 8.2 seconds for the 75-yard backward dash), his penchant for consuming ice-cream by the quart, and his neologism "copacetic," meaning "entirely satisfactory."

When Robinson died penniless, television host Ed Sullivan personally paid for the funeral. His body lay in state at an armory in Harlem; schools were closed; thousands lined the streets waiting for a glimpse of his bier; and he was eulogized by politicians, black and white—-perhaps more lavishly than any other African American of his time.

Robinson claimed to have coined the word "copacetic." There is little argument that he popularized the term sufficiently to make it part of the American English vocabulary.

In death, Bojangles has become indelible in American culture:

Jerry Jeff Walker's 1968 folk song "Mr. Bojangles" is often thought to be about Robinson, however it only indirectly makes reference to him. According to Walker, it was inspired by Walker's encounter with a white street performer in the New Orleans first precinct jail, a street performer who called himself "Bo Jangles," presumably taking his pseudonym from Bojangles Robinson.[2] In the song, the street performer is a heavy drinker and has a dog that died. By Robinson's own account and those of his friends, he neither smoked nor drank,[3] and he never had a dog.