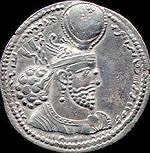 A coin of Bahram II.

Bahram II was the fifth Sassanid King of Persia in 276–293. He was the son of Bahram I (273–276). During his reign, most of Armenia was lost to the Roman Empire and Emperor Marcus Aurelius Carus succeeded in reversing Rome's previous defeats at the hands of the Sassanids but died suddenly before he could consolidate his victory. The Romans withdrew. Bahram II successfully crushed a rebellion led by his nephew Sakasthan in what is now Afghanistan and claimed at least a moral victory over the Romans, due to their retreat. His reign is said to have began tyrannically but to have become more moderate and just under the influence of the state-religion. Bahram II commissioned a series of reliefs and inscriptions, which survive. His son's reign was short lived, since Bahram I's brother usurped the throne.

Although Armenia was lost during his reign, he retained Sakasthan and perhaps by good fortune more than skill was able to pass on to those who followed him on the throne an empire that was strong enough to continue to resist Roman hegemony. Persia was the only rival whom the Romans grew to admire, even regarding them as their peers. The survival of the Persian empire against Rome prevented one power from totally dominating the extended cultural space that linked the European, North African and Near Eastern space at the time. Persia remained an important bridge between India further to the East and the European world. Even after the Muslim conquest of Persia, largely due to the strength and vitality that Persia's civilization achieved under the Sassanids, this ancient heritage was not lost to the cultural patrimony of humanity.

Bahram II succeeded his father in 276 as the fifth Sassanid ruler. Bahram II is said to have ruled at first tyrannically, and to have disgusted his principal nobles, who went so far as to form a conspiracy against him, intending to put him to death. The Zoroastrian high priest, Kartir, however, interposed, and, having alerted him to the threat, convinced him to acknowledge his wrong and to promise a change of conduct.[1] The nobles upon this returned to their allegiance; and Bahram, during the remainder of his reign, is said to have been distinguished for wisdom and moderation, and to have become popular with all his subjects. Wiesehofer says that civil unrest forced Bahram to "cooperate more closely with the aristocracy and clergy."[2] Yarshater describes the high priest as "probably the real power behind the throne." He may have secured Bahram's succession because, like his father, he was less favorable to religious minorities whereas Bahram I's brother, who expected to succeed, "followed a liberal policy."[3]

In 283, Bahram's nephew, Hormozd, who had been appointed as governor of several provinces revolted. Bahram successfully crushed this rebellion. A campaign in the East against the Sakasthan (the modern-day Sistan) and Afghanistan followed. This campaign ended in 283, a year after the Roman Emperor, Carus, intent on reversing Rome's earlier defeats, invaded. Bahram then crowned his son, the future Bahram III as "King of the Sakas."[4] 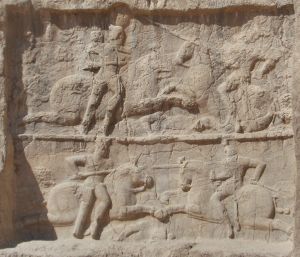 In 282, Roman Emperor Carus crossed the Euphrates along with his troops and invaded Mesopotamia wreaking havoc. Bahram II was not able to offer resistance since his troops were still occupied with the campaign in Afghanistan. Mesopotamia was ravaged and the cities of Selucia and Ctesiphon were occupied by the Roman troops. However, as an oracle had predicted earlier, the death of Carus cut short his career as well as the Roman advance.

The circumstances of Carus's death remain mysterious and inexplicable to this very day. As he was in his camp near Ctesiphon, recuperating from an illness that had struck him, there was a thunderstorm. A weird darkness had overcome the camp and was accompanied by flashes of lightning. Then, suddenly, there was a loud clap and the cry went that the Emperor was dead. Some said that his tent had been struck by lightning, and that his death was owing to this cause; others believed that he had succumbed to his illness at the exact moment of the thunder-clap; a third theory was that his attendants had taken advantage of the general confusion to assassinate him, and that he merely added another to the long list of Roman emperors murdered by those who hoped to profit by their removal. Some speculate that Carus was defeated in a final battle but Farrokh comments that "there is no textual evidence to confirm this."[5] Following Carus's death, the Romans retreated and Carus's son, Numerian, concluded peace with the Persians.

In 286, however, the celebrated Diocletian resumed hostilities with Persia, marching into Persian territory in aid of the Armenian prince Tiridates III who was in rebellion against Persia. Armenia was liberated after a couple of battles. Tiridates declared himself independent.

Tiridates achieved extraordinary success during this period. He defeated two Persian armies in the open field, drove out the garrisons which held the more important of the fortified towns, and became undisputed master of Armenia. He even crossed the border which separated Armenia from Persia, and gained signal victories on admitted Persian ground.

Bahram II died soon afterwards in an extremely dejected state. He was briefly succeeded by his son, Bahram II before he was deposed by his uncle, deposed by his uncle, Narseh. Bahram's Queen may also have been his half-sister.[6] Narseh had expected to succeed Bahram I and, according to Yarshater, "bided his time" before making his move to seize the throne.[7] 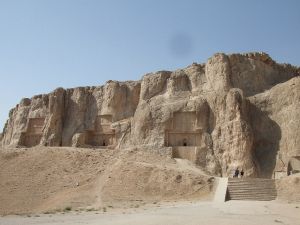 Several rock inscriptions and reliefs. Two equestrian reliefs at Naqsh-e Rustam, the location of many monuments, tombs and memorials to the rulers of Persia, depict him apparently victorious against the Romans. This is understood to represent the Roman withdrawal after Carus' death as a Persian victory.[8] Another relief at the same site shows him with his court. Every figure wears "distinctive headgear."[9] This was superimposed over an earlier relief. One relief has him galloping off on his horse while knocking an enemy down with his long lance.[10] One relief shows the high priest, Kartir at his side. Another, at Sar Mashhad has him killing two lions with his wife and son besides him. This also contains a "lengthy Pahlavi inscription detailing Zoroastrian religious teaching and rituals" and four figures who witnessed the event, "one of whom may represent Anahita."[11] Anahita was a divine figure associated with water, wisdom and healing. Her figure is much larger than that of the King. Āyat Allāhī says that of all the Sassanid kings, Bahram II "appears to have been most concerned with stone engravings and sculpture." He was "the only king to have commissioned an everlasting image" says Āyat Allāhī "of himself accompanied by his Queen and other members of the royal family." One image has a "full face-pose" and shows Bahram on his throne, wearing his crown "decorated with the wings of a falcon … symbols of the God of victory."[12] An image in the Guyum region of Fars depicts his coronation but is incomplete.[10] Āyat Allāhī comments that while Bahram II is depicted in intricate detail and fine lines, his wife is not, "the figure of the Queen bears no trace of femininity." He suggests that this because ancient Persians saw the feminine as holy, so artists made no effort to recreate the beauty of the female form. While other figures were positioned and represented to "attract all attention to the king" the larger size of the goddess shows that kings are subject to the deities.

Due to Bahram's interest in sculpture and engravings, images of his reign have been preserved. These convey some ideas about how kingship was understood at the time - as a divine gift, although the king was not himself divine. The story of how Bahram underwent a personal transformation of character that resulted in better governance stands of an example of how people can change for the better, given the right conditions. Despite the rock reliefs, surprisingly little is known about his reign, however. What he can be credited with, despite the loss of Armenia and Carus' successful campaign, is preserving the empire which, in 309, entered what has been described as its First Golden Era. Even if the Roman withdrawal was more a matter of chance, Bahram and the empire still survived as an independent polity. He did retain Sakasthan. It was during his period that the sacred texts of Zoroastrianism were completed, which preserved for posterity the wisdom taught by this tradition, which reminds humanity that the struggle between good and evil is real. Bahram II had experiences this struggle in his own life. During this subsequent golden period, Armenia, was once again placed under Persian control. Afghanistan, too, was subdued. The survival of the Persia empire against Rome prevented one power from totally dominating the extended cultural space that linked the European, North African and Near Eastern space at the time. Persia remained an important bridge between India further to the East and the European world. Even after the Muslim conquest of Persia, largely due to the strength and vitality of Persia art, literature, and culture under the Sassanids, this ancient heritage was not lost.

Retrieved from https://www.newworldencyclopedia.org/p/index.php?title=Bahram_II&oldid=1062372
Categories:
Hidden category:
This page was last edited on 1 January 2022, at 01:04.
Content is available under Creative Commons Attribution/Share-Alike License; additional terms may apply. See Terms of Use for details.