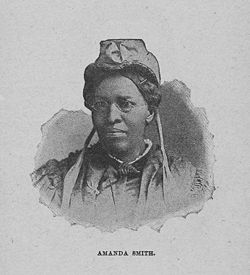 Amanda Berry Smith (January 23, 1837 – February 24, 1915)[1] was a former slave who became an inspiration to thousands of women, both black and white, while traveling and preaching as a devout Christian during her lifetime. Amanda Smith was praised for her modest lifestyle and unwavering faith in her religion. She traveled around the globe as an evangelist, visiting at least three continents, Europe, Africa, and Asia, no mean accomplishment for anyone in her era, but quite extraordinary for a former slave. She broke the stereotype of race and also of gender, as her passion and ability to communicate the gospel appealed to people, regardless of their race or sex, so that black and white alike were attracted by her preaching. She helped to dispel the myth of black racial inferiority and to provide for a more egalitarian Christian religion. Smith held complete faith in God and in her religion until her death.

Christianity has had difficulty coping with racial diversity, and in many churches congregations are almost entirely white or almost entirely black. This can reinforce social division instead of challenging this as contrary to the teaching that all people are created in the image of God, regardless of color or gender. Smith was sometimes called "God's image carved in ebony." While some people object to the idea that God has either color or gender, if it is true that all people reflect "God's image," then God must indeed be black as well as white, female as well as male and to depict someone such as Smith as "God's image carved in ebony" is a reminder that no single race, or gender, can claim that they and only they mirror the image of God. Ultimately, the God whom Smith faithfully served is greater than any humanly conceived description.

Amanda Smith was born in Long Green, Maryland, a small town in Baltimore County. Her father's name was Samuel Berry while her mother's name was Mariam. Her father, a slave, was owned by Darby Insor. Amanda's mother was owned by Shadrach Green.[2] Despite having kind masters, Amanda's parents longed for freedom. Her father worked for years at night and after long days of field labor, he had to make brooms and husk mats to pay for the freedom of his whole family of seven.[3] Amanda taught herself how to read by cutting out large letters from newspapers and asking her mother to make them into words. When she was thirteen, only having three and a half months of formal schooling, Amanda went to work near York, Pennsylvania, as the servant of a widow with five children.[4] While there, she attended a revival service at the Methodist Episcopal Church.

She worked hard as a cook and a washerwoman to provide for herself and her daughter after her husband was killed in the American Civil War.[5] Prayer became a way of life for her as she trusted God for shoes, the money to buy her sisters freedom and food for her family. She became well known for her beautiful voice and, hence, opportunities to evangelize in the South and West opened up for her. Wherever she traveled, she wore a plain poke bonnet and a brown or black Quaker wrapper, and she carried her own carpetbag suitcase. Amanda married a pastor named James Smith in 1863, and the couple eventually relocated to New York City.[6] By 1869, her children and husband had passed away, but Amanda continued to spread the Christian message.[7] In 1870, Smith was praised for her ability to inspire a group of whites to whom she was preaching during a camp meeting. This event would pave the way for Smith's journeys across the globe to spread her faith.

In 1876, she was invited to speak and sing in England, traveling on a first class cabin provided by her friends. The captain invited her to conduct a religious service on board and she was so modest that the other passengers spread word of her. This resulted in her stay in England and Scotland for a year and a half. After her trip, she returned to her homeland and eventually founded the Amanda Smith Orphans' Home for African-American children in a suburb of Chicago. She continued to visit various nations and gained a reputation as, "God's image carved in ebony."

Her autobiography was published in 1893. She combined the proceeds she received from its sale with her personal finances in order to create the aforementioned orphanage, which was opened in 1899.

Amanda Smith retired to Sebring, Florida in 1912. Her orphanage was taken over by the state and named the Amanda Smith Industrial School for Girls. It was completely destroyed by fire in 1918, and was not reopened.

Amanda Smith was lauded for her modest lifestyle and unwavering faith in her religion. She was highly respected and admired by fellow evangelists and would spend many years of her life traveling abroad to spread the Christian message in places such as England, India, and Africa. Smith was a powerful speaker and singer, thus her race and sex were overlooked as she spread the gospel. Because she was able to appeal to whites, Smith helped to dispel the myth of black racial inferiority and to provide for a more egalitarian Christian religion. Smith held complete faith in God and in her religion until her death.

Retrieved from https://www.newworldencyclopedia.org/p/index.php?title=Amanda_Smith&oldid=1052796
Categories:
This page was last edited on 17 May 2021, at 14:13.
Content is available under Creative Commons Attribution/Share-Alike License; additional terms may apply. See Terms of Use for details.