Ailred or Ælred or Ailred of Rievaulx, Abbot of Rievaulx (b. Hexham 1110 – d. Rievaulx January 12, 1167), is a Christian saint and historian best know for his exhortations toward chastity and purity. The medieval church was itself compromised by the conduct of some of its clergy, including bishops, whose sexual morality broke the rule of celibacy and caused embarrasment when the Church admonished laity to practice chastity. A church that was itself wealthy, too, often neglected spiritual concerns and acted as a wordly power. Bishops and abbots were effectively feudal lords, and some were more interested in power than in religion. Among these, Ailred of Rievaulx shines like a lone star in the night-sky. His approach to matters of sexuality was compassionate in as much as he knew that people are not perfect but he distinguished willful, repeated transgression and immorality from genuine lapses caused by sin. His genuine interest in spiritual wholeness, and his advice to the king to act justly, were exactly what ought to concern a Church leader. Sadly, that king, Henry II of England could not avoid clashing with his Archbishop and former Chancellor, Thomas Becket over who had jurisdiction when a priest was involved in legal proceedings, which led to the Archbishop's murder. Although his office was relatively insignificant, Ailred's counsel was valued by three kings, and by many barons and fellow clergy.

Ailred was an Anglo-Saxon, born in Hexham, Northumbria, in 1110. His father, a married priest, sent him to be educated at Durham and then sent him to spend several years at the court of King David I of Scotland in 1130 where Ailred became the king's seneschal also known as the Master of the Household before leaving the court to enter a Cistercian monastery at Rievaulx Abbey, in Yorkshire, around the year 1134. Tradition says that he was offered a bishopric, but chose the monastic life instead. 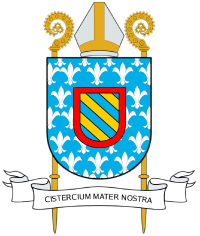 Coat of Arms of the Cistercian order.

The Order of Cistercians is sometimes called the White Monks (from the color of the habit, over which a black scapular or apron is sometimes worn) is a Roman Catholic religious order of cloistered monks. The first Cistercian abbey was founded by Robert of Molesme in 1098, at Cîteaux Abbey. Two others, Saint Alberic of Citeaux and Saint Stephen Harding, are considered co-founders of the order, and Bernard of Clairvaux is associated with the fast spread of the order during the twelfth century.

The cornerstone of Cistercian life was a return to a literal observance of the Rule of Saint Benedict, rejecting the developments the Benedictines had undergone, and tried to reproduce the life exactly as it had been in Saint Benedict's time. however on various points the Cistercians went beyond it in austerity. The most striking feature in the reform was the return to manual labor, and especially to field-work, which became a special characteristic of Cistercian life. The Cistercians became the main force of technological diffusion in medieval Europe.

Spread of the Cistercian order 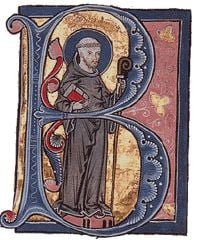 Saint Bernard of Clairvaux, in a medieval illuminated manuscript.

By 1111 the ranks of the order had had grown sufficiently at Cîteaux and Stephen Harding sent a group of 12 monks to start a new community dedicated to the same ideals of the strict observance of Saint Benedict. It was built in Chalon sur Saône in La Ferté on May 13, 1113.[1] Bernard of Clairvaux arrived at Cîteaux during 1113 with 30 other monks to join the monastery. The next year another daughter house was founded, Pontigny Abbey. The next year, in 1115, Bernard founded Clairvaux, followed by Morimond in the same year. Then Preuilly, La Cour-Dieu, Bouras, Cadouin and Fontenay. At Stephen Harding's death (1134) there were more than 30 Cistercian daughter houses. When Bernard passed away (1154) there were more than 280. By the twelfth century there were more than 500 daughter houses. Meanwhile, the Cistercian influence in the Roman Catholic Church more than kept pace with this material expansion, so that Saint Bernard saw one of his monks ascend the papal chair as Pope Eugene III.

Ailred entered the abbey at Rievaulx, where Bernard had appointed his secretary, William, abbot over the monks from Clairvaux who formed the new community. In spite of delicate health, Ailred followed the austere regime devotedly and became so esteemed in his community that he was chosen as envoy to Rome in 1142 over the disputed election of William of York and a few months later as master of novices.

Ailred became the abbot in 1143 of a new house of his order at Revesby in Lincolnshire, and later, abbot of Rievaulx itself in 1147. He would spend the remainder of his life in the monastery. Under his administration the size of the abbey grew to some six hundred monks including 150 choir monks and 500 lay brothers and lay servants, the largest in England. It had made five daughter houses in England and Scotland. Ailred made annual visits to these Cistercian houses in England and Scotland, with other visits to places as far as Citeaux and Clairvaux. Ailred was also superior of all the Cistercians in England, as well as abbot of Revesby. These frequent travels and visits may have compromised his health, for he is recorded as suffering from a very painful, bladder stone disease in his later years.

Ailred was known best for sensitive discretion and gentle holiness. He gave strong emphasis to charity and cited his inspiration as coming from the writings of John the Revelator and Augustine of Hippo. He notably humanized the intransigence of Cistercian monasticism and so attracted men of similar character to his own. He made many friends and his writings propelled him to national importance. He was chosen to preach at Westminster for the Translation of Edward the Confessor in 1163. This led him to write The Life of Saint Edward, King and Confessor. His writings included a historical work Life on Saint Ninian and another on the saints of Hexham. His more characteristic writings included a treatise on Friendship, the Speculum Caritatis, and Sermons on Isaiah, often considered his finest work. He was unable to complete a treatise on the human soul before he expired and it was left unfinished.

In spite of suffering agony of bladder stones, which obliged him to live in a hut near the infirmary towards the end of his life, he was sometimes well enough to travel. On his way to his Scottish monasteries, he used to visit his friend Godric of Finchale. until the last year of his life. Later his relics were moved to the church. In spite of the vivid and convincing portrait of him by Walter Daniel, his friend and disciple, Ailred was never canonized. A local cult, which was approved by the Cistercians, promulgated his feast in 1476.

Ailred died on January 12, 1167, at Rievaulx and was buried in the Chapter House. He is listed for January 12 in the Roman Martyrology and the calendars of various other churches. Cistercians honor him on February 3 and March 3.

He wrote several influential books on spirituality, among them The Mirror of Charity perhaps at the request of Bernard of Clairvaux and Spiritual Friendship. He also wrote seven works of history, addressing two of them to Henry II of England, advising him how to be a good king and declaring him to be the true descendant of Anglo-Saxon kings. This advice was mainly to uphold the law of the Church, but the Anglo-Saxon tradition also saw governance as a Church-state partnership to promote the common good, not just the good of the few, or primarily of the king. Hence, the term "commonwealth" is of Anglo-Saxon origin. Ailred also remained a close-friend of King David of Scotland and was popular with Stephen of England, Henry's cousin and predecessor. The fact that his advice was valued by more than one king suggests that his reputation served him well, and although only an Abbot not a prelate of a major see, he was able to exercise a wide moral influence as a player on the national stage. Until the twentieth century Ailred was generally known as a historian rather than a spiritual writer. For many centuries his most famous work was his Life of Saint Edward, King and Confessor.

His public works encouraged virginity among the unmarried and chastity (not abstinence) in marriage and widowhood, and warn against any sexual activity outside of marriage. In all his works he treats same-sex and opposite-sex attraction as equally possible and equally dangerous to one's oath to celibacy. At the same time, he expressed compassion about human failings, criticized the absence of pastoral care for the Nun of Watton and her case of pregnancy while within a Gilbertine convent. It is believed by some that he expressed complacency toward monks walking hand in hand inside the monastery.

Most of Ailred's works have appeared in translation from Cistercian Publications. They include:

Cistercian Publications have also brought 20 of Ailred's known sermons to the public eye. Other historical works (Life of Saint Ninian, On the Saints of Hexham, and A Certain Wonderful Miracle) appeared in 2006.

His feast day is celebrated on January 12. This was promulgated by the Cistercians in 1476. In 1985, this feast was accepted for observance as a Black Letter Day by the General Convention of the Episcopal Church, U.S.A. The collect is:

Pour into our hearts, 0 God, the Holy Spirit's gift of love, that we, clasping each the other's hand, may share the joy of friendship, human and divine, and with your servant Aelred draw many into your community of love; through Jesus Christ the Righteous, who lives and reigns with you in the unity of the Holy Spirit, one God, now and for ever. Amen.

For his efforts in writing and administration he has been called the "St. Bernard of the north." He has also been described by David Knowles, a historian of monasticism in England, as "a singularly attractive figure… No other English monk of the twelfth century so lingers in the memory.[2]

Justifiably or not, Ailred has been adopted as the patron saint of Integrity, an organization in the Episcopal Church in the United States of America composed of gays and lesbians and their friends; and of the Order of St. Ailred, in the Philippines which accepts people of all sexual orientations.[3] He is also patron saint of The National Anglican Catholic Church, a gay-friendly church serving New England and the northeast United States. What is consistent with Ailred's life is his conviction that no one should be denied pastoral care.

There is a high school named after St. Ailred in Newton-le-Willows, Lancashire in the United Kingdom.

Retrieved from https://www.newworldencyclopedia.org/p/index.php?title=Ailred_of_Rievaulx&oldid=1052108
Categories:
Hidden category:
This page was last edited on 30 April 2021, at 04:55.
Content is available under Creative Commons Attribution/Share-Alike License; additional terms may apply. See Terms of Use for details.