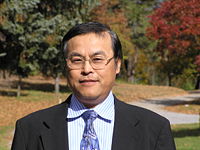 Dr. Keisuke Noda serves as the Philosophy Editor and Information Science consultant for the New World Encyclopedia. Dr. Noda is an associate professor of philosophy and the Library Director at the Unification Theological Seminary, Barrytown, New York.

Dr. Noda earned his B.E. in applied physics from Waseda University, Tokyo, Japan, M.L.S. from the Graduate School of Library and Information Sciences at the Queens College, NY, and M.A. and Ph.D. in philosophy from the New School for Social Research (currently New School University) for his comparative studies of Phenomenology and Zen. His areas of specialty include phenomenology, existentialism, and other areas within continental philosophy. He has taught graduate courses on Postmodernism, Global Ethics, Social Ethics, Theories of Human Nature, Zen and Western Thought, Unification Philosophy, Research Methods, and other philosophy courses.

Dr. Noda’s attempt to translate the conceptual into the realm of the imaginary and bodily culminated in the Shosetsu Testsgaku-shi (History of Philosophy as a Narrative, 2 vol.; Niigata, Japan: Taiyo Shobo, 2004). The book encompasses a wide range of philosophers, from the Pre-Socratics to contemporary thinkers in the West and key philosophers in the East, and describes the essence of each philosopher’s ideas in the form of a fantasy novel, which he describes as a “meta-fantasy.” Dr. Noda has contributed numerous articles in Journals, Magazines, and Newspapers, including “Understanding the Word as the Process of Embodiment” (Journal of Unification Studies, Vol. I, 1997), “Understanding God: The Conceptual and the Experiential in Unification Thought” (Journal of Unification Studies, Volume IV 2001-2002), and “Nietzsche, Apostle of Faith?” (Journal of Unification Studies, Vol. VII, 2006).

Dr. Noda has taught at various seminars and given presentations at international conferences across the U.S. and in Japan. His presentations have since then been released as a video entitled Godism (Japanese; 3 vol. Video; Women’s Federation for World Peace, Japan).

As an ardent fisherman, he developed a graduate level course entitled Ocean Ministry, which contextualizes the experience of fishing within multiple disciplines and studies, including the use of adventure-based education to cultivate spirituality, psychological studies involving Flow, and a critique of modernity focusing on environmental ethics.