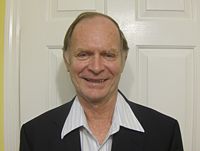 John David Doose is a New World Encyclopedia Associate Editor. His contributions to NWE are on topics covering art, geography, theology, and historical figures. He earned a B.A. in Journalism from the University of South Carolina (1971). He spent four years in the United States Navy working as a journalist from 1971 to 1975. While there, he helped redesign the weekly newspaper, Jax Air News, and earned a Chief of Information (CHINFO) Merit Award; the highest award possible for a US Navy publication. He was a feature writer with The News World in New York City and became that daily newspaper's Feature Editor in 1980. He received a certificate in Religious Education from the Unification Theological Seminary in 1983. He returned to daily print journalism in 1984 and worked as the Culture Editor for the New York City Tribune.

Mr. Doose has worked as an editor with Paragon House Publishers and was the founding Managing editor of the Religious Journal Dialogue and Alliance. He currently works in the tourism industry in Charleston, South Carolina and as a freelance writer and editor.