Thomas Joseph Pendergast (July 22, 1873 – January 26, 1945) was an American politician who controlled Kansas City and Jackson County, Missouri as a political boss. "Boss Tom" Pendergast gave workers jobs and helped elect politicians during the Great Depression, becoming wealthy in the process. Pendergast's legacy is a reminder that even in a democratic society, abuse is possible when the motives of those involved in the political process, whether inside or outside of elected office, are insincere. There is no easy litmus test of motive or personal sincerity, however. 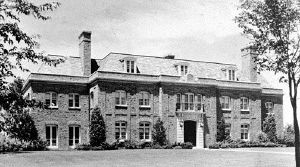 Thomas Pendergast was born in St. Joseph, Missouri, in 1873. He was raised Roman Catholic and had nine brothers and sisters. In the 1890s, he worked in his brother James Pendergast's saloon in the West Bottoms neighborhood of Kansas City. Here, his older brother, a member of Kansas City, Missouri's city council, taught him the city's political system and the advantages and means of controlling blocks of voters. Jim retired in 1910 and died the next year, after naming Tom his successor.

Following his brother's death, Pendergast served in the city council until 1916, when his horizons broadened and his focus changed to consolidating the faction of the Jackson County, Missouri Democratic Party. After a new city charter passed in 1925, the city was placed under the auspices of a city manager selected by a smaller council. Pendergast easily gained control of the government.

Pendergast married Caroline Snyder in January, 1911, and raised three children with her, two girls and a boy, at their home on 5650 Ward Parkway in Kansas City. 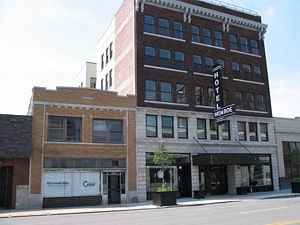 Tom ruled out of the second floor of the yellow brick building at 1908 Main Street. It is not on the National Register of Historic Places, although the neighboring five story Monroe Hotel is. Photograph from August, 2006.

Pendergast ruled from a simple, two-story yellow brick building at 1908 Main Street. Messages marked with his red scrawl were used to secure all manner of favors. Although he was unquestionably corrupt and there were regularly shootouts and beatings on election days during his watch, history has tended to be kind to his legacy since the permissive go-go days gave rise to the golden era of Kansas City Jazz (now commemorated at the American Jazz Museum at Eighteenth and Vine) as well as a golden era of Kansas City building. In addition, he spotted the talent of Harry S. Truman. Pendergast was famed for his common touch and helped pay the poor's medical bills, provided jobs and had famous Thanksgiving and Christmas dinners for those less fortunate. One way or another, Kansas City voter turnout tended to be close to 100 percent in the Pendergast days.

Despite Prohibition, Pendergast's machine and a bribed police force allowed alcohol and gambling. Additionally, many elections were fixed to keep political friends in power. In return, Pendergast's companies like Ready-Mixed Concrete were awarded government contracts. Under a $40 million bond program, the city constructed many civic buildings during the Depression. Among these projects were the Jackson County courthouse in downtown Kansas City, and the concrete "paving" of Brush Creek near the Country Club Plaza. A local urban legend, that bodies of Pendergast opponents were buried under the Brush Creek concrete, was finally put to rest when the concrete was torn up for a renewal project in the 1980s. He also had a hand in other projects like the Power and Light Building, Fidelity Bank and Trust Building, Municipal Auditorium, and the construction of inner-city high schools.

At his peak, Pendergast wielded considerable power and was able to place many of his associates to positions of authority throughout Jackson County. Pendergast handpicked Harry S. Truman, the 1934 candidate for United States Senate, and Guy Brasfield Park as governor in 1932 when the previous candidate, Francis Wilson, died two weeks before the election. With Pendergast’s support in 1926, Truman was elected to the position of Presiding Judge of Jackson County, a position he held until 1934. In 1934, Truman sought Pendergast's support for the position of Missouri State Treasurer, but Pendergast had pledged his support for another candidate. In turn, Pendergast suggested Truman run for United States Senate, and then provided the support of his Kansas City machine in Truman’s 1934 successful primary and general election races.[2]

Pendergast also extended his rule into neighboring cities such as Omaha and Wichita where members of his family had set up branches of the Ready-Mixed Concrete Company. The Pendergast stamp was to be found in the packing plant industries, local politics, bogus construction contracts, and the jazz scene in those cities. Many of Truman's old war buddies had veterans' "clubs" in Omaha.

Downfall and the later years

Pendergast's downfall is widely believed to have occurred after a falling out with Lloyd C. Stark. Pendergast had endorsed Stark (famed for Stark Apples and reputed to have had the largest apple orchard in the country) for governor in 1936. Pendergast was out of the country during the election and his followers were even more obvious and corrupt than usual in Stark's successful election. With investigations looming, Stark turned against Pendergast, prompting federal investigations and the pulling of federal funds from Pendergast's control.

After Pendergast was convicted of income tax evasion, Stark sought to unseat Harry Truman in the 1940 U.S. Senate election. It was a very bitter battle that made both Missourians lifelong enemies, as Truman successfully was elected after U.S. District Attorney Maurice Milligan, who had prosecuted Pendergast, also entered the race, causing Milligan and Stark to split the anti-Pendergast vote.

In 1939, Pendergast was arraigned for failing to pay taxes on a bribe received to pay off gambling debts. After serving 15 months in prison at the nearby United States Penitentiary, Leavenworth, he lived quietly at his home, 5650 Ward Parkway, until his death in 1945.