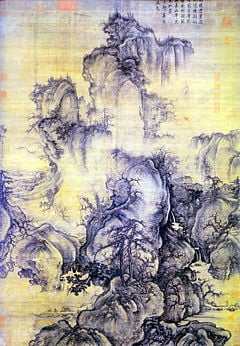 A painting by Northern Song Dynasty painter Guo Xi (c.1020–c.1090), demonstrating his innovative techniques for producing multiple perspectives, which he called "the angle of totality."

Shan shui (Traditional Chinese: 山水畫) refers to a style of Chinese painting that involves the painting of scenery or natural landscapes with brush and ink. The name literally translates to "mountain-water-picture." Mountains, rivers, and often waterfalls are prominent in this art form. Shan shui painting first rose to wide prominence in China in the tenth and eleventh centuries,[1] during the Song Dynasty (宋朝; Wade-Giles: Sung Ch'ao).

When Chinese painters work on shan shui painting, they do not try to present an image of what they have seen in nature, but what they have thought about nature. It is not important whether the painted colors and shapes look exactly like the real object; the intent is to capture, on paper, an awareness of inner reality and wholeness, as though the painting flows directly from the artist’s mind, through the brush, onto the paper. Shan shui painters use the same materials and essential techniques as calligraphers, and their works are judged by the same criteria. Shan shui paintings involve a complicated and rigorous set of requirements for balance, composition, and form. Each painting contains three basic elements, “paths,” a “threshold,” and the “heart” or focal point. Chinese elemental theory, with five elements representing various parts of the natural world, is used to determine the use of color and the placement of elements in the paintings.

When Chinese painters work on shan shui painting, they do not try to present an image of what they have seen in nature, but what they have thought about nature. It is not important whether the painted colors and shapes look exactly like the real object or not.

Shan shui paintings have no fixed perspective, as Western landscape paintings do.

The principles of shan shui can be extended to gardening and landscape design. Shan represents “yang” or strong, tall, and vertical elements, while shui is “yin,” soft, horizontal, and lying on the earth. Vertical and horizontal elements must be maintained in balance. The application of shan shiu to gardening implies having a deep respect for natural forces, and allowing nature to shape the garden, rather than trying to dominate nature.[4]

Some shan shui paintings were mounted on large, vertical hanging scrolls, which were hung only for a few days at a time. More were executed on horizontal rolling handscrolls, which could be unrolled a few feet at a time from right to left, to allow the viewer to move through the landscape, enjoying different aspects.[5] 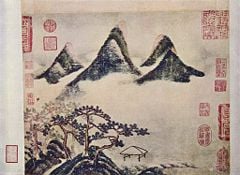 Mountains and pines in spring

Guo Xi, a representative painter of landscape painting in the Northern Song dynasty, has been well known for depicting mountains, rivers and forests in winter. This scene of a deep and serene mountain valley covered with snow and several old trees struggling to survive on precipitous cliffs, is a masterpiece of the use of light ink and magnificent composition.

Landscape painting in China originated during the Three Kingdoms Period (220-280), when landscapes were used as backdrops for portraits or figure paintings. During the Sui (581-618) and Tang (618–907) dynasties, artists began to produce paintings with landscapes as the central theme.

During the Tang dynasty, Chinese scholar-bureaucrats began to paint as a leisure activity. Brush painting was closely associated with the art of calligraphy and employed the same brushes, inks, and other materials, the “Four Treasures” found in a scholar’s study. The literati considered themselves amateurs in contrast to the professional court painters. To most of these men, painting was not a professional occupation but one of several means by which they expressed their intellectual reactions to life and nature in visible symbols. They regarded painting as a form of meditation, especially influenced by Zen Buddhism. The foundation of their technical mastery was training in calligraphy, which allowed them to transmit their thoughts in symbols of nature with the same ease as in conventional Chinese characters. Their art became an intimate kind of idea-writing. The beauty of a painting was closely connected to the ease with which it was produced, but it was an ease which could not be achieved without intense training and deep thought. Shan shui painting also became associated with gardening, another pursuit of gentleman scholars.

Shan shui painting first rose to wide prominence in China in the tenth and eleventh centuries,[6] during the Song Dynasty(宋朝; Wade-Giles: Sung Ch'ao). It was characterized by a group of landscape painters, most of them already famous, who produced large-scale landscape paintings, usually featuring mountains. Mountains had long been considered sacred places in China, the dwelling places of immortals and thus, close to the heavens. Philosophical interest in nature, or in mystical connotations of naturalism, could also have contributed to the rise of landscape painting. Some authors have suggested that Daoist emphasis on the insignificance of the human presence in the vastness of the cosmos, or Neo-Confucian interest in the patterns or principles that underlie all phenomena, natural and social, gave rise to the highly structuralized nature of shan shui. The themes of the vastness of nature and unconquerable, majestic mountains may also have served as a refuge from the contradiction between Confucian ideals of perfection and the corruption, social instability and political uncertainty which was an inevitable part of the lives of Chinese intellectuals.

The Ming artist and art theorist Dong Qichang (1555–1636) defined two styles of shan shui painting from the Song dynasty: The Northern Song, which used strong, rough brush strokes, and the Southern Song (1127–1279) which was characterized by flowing, elegant strokes.[7] Later, under the Mongol government of the Yuan dynasty (thirteenth to fourteenth century), shan shui painting became a symbol of cultural and political identity for Chinese intellectuals.

Chinese painters used the same materials and essential techniques as calligraphers, and their works were judged by the same criteria: The vitality and expressiveness of their brush strokes and the rhythm and harmony of their composition. Painters did not strive to reproduce realistic, three-dimensional scenery as much as to capture on paper an awareness of inner reality and wholeness by means of the quality of their brushwork, as though the painting was flowing directly from the artist’s mind, through the brush, onto the paper.

Most Chinese painting is done with a brush in ink monochrome on silk or absorbent paper. There is no opportunity for erasure or correction, so the artist must know beforehand what he is going to paint. The execution must be done with speed, confidence, and a technical mastery of the brush.

Shuimo—ink and wash, uses only ink and water, varying brushwork, and the amount of ink for dark and light effects

The rhythmic movement of line used in calligraphy and brush painting has influenced all forms of Chinese art, giving it remarkable harmony and unity of style.

Shan shui paintings involve a complicated and rigorous set of almost mystical requirements[9] for balance, composition, and form. There are three basic components to all shan shui paintings:

Paths—Pathways should never be straight. They should meander like a stream. This helps deepen the landscape by adding layers. The path can be the river, or a path along it, or the tracing of the sun through the sky over the shoulder of the mountain. The Threshold—The path should lead to a threshold. The threshold is there to embrace you and provide a special welcome. The threshold can be the mountain, or its shadow upon the grounds, or its cut into the sky. The Heart—The heart is the focal point of the painting and all elements should lead to it. The heart defines the meaning of the painting.

Additional components can include rugged mountains partly hidden by misty clouds, a waterfall, groups of trees, a valley with a lake or river, a bridge, a boat, or a hut beside the river. Human figures, when included, are very small to indicate the insignificance of man in nature. Natural elements have symbolic meanings; pine trees and cranes symbolize long life, bamboo represents loyalty, and plum blossoms, purity.

Shan shui draws upon Chinese elemental theory with five elements representing various parts of the natural world, and, thus, has specific directions for colorations that should be used in "directions" of the painting, and for which color should dominate.[10]

The Elements interact in a positive manner as follows:

Elements that react positively should be used together. For example: Water compliments both Metal and Wood, therefore a painter would combine blue and green or blue and white. There is no positive interaction between Earth and Fire, therefore, a painter would not choose to mix Yellow and Red.

The Elements interact in a negative manner as follows:

Elements that interact negatively should never be used together. For example: Fire will not interact positively with either Water or Metal so a painter would not choose to mix the colors of red and blue or red and white.