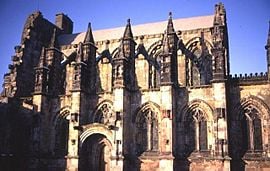 Rosslyn Chapel, properly named the Collegiate Church of St Matthew, was originally a Roman Catholic church founded in the village of Roslin, Midlothian, Scotland, in the mid-fifteenth century. Construction on the chapel began under William Sinclair in 1456, a noble family descended from Norman knights. After the Scottish Reformation (1560), the Chapel was closed to the public until 1861, when it was reopened for worship according to Protestant rites of the Scottish Episcopal Church. Thus, the chapel switched from Roman Catholic to Protestant hands.

Many legends became associated with the Sinclair family and Rosslyn Chapel. Built 150 years after the dissolution of the Knights Templar, the structure supposedly has many Templar symbols, such as the "Two riders on a single horse" that appear on the Seal of the Knights Templar. The layout of the chapel also appears to follow the layout of the Temple of Solomon.[1] Rosslyn Chapel is the third Sinclair place of worship at Roslin—the first being in Rosslyn Castle and the second (whose crumbling buttresses can still be seen today) in what is now Roslin Cemetery.[2] Additionally, its fine carvings were alleged to have been the work of Freemasons. As a result of these romantic notions, the chapel features prominently in modern conspiracy theories including Dan Brown's popular novel, The Da Vinci Code. 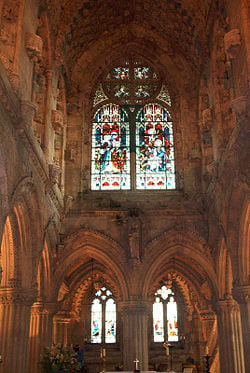 Interior of the chapel.

Construction of the chapel began on September 20, 1456, although it is often been recorded as 1446. The confusion over the building date comes from the chapel's receiving its founding charter to build a collegiate chapel in 1446, from Rome. William Sinclair 3rd Earl of Orkney, Baron of Roslin and 1st Earl of Caithness, built Rosslyn Chapel. A later William Sinclair of Roslin became the first Grand Master of the Grand Lodge of Scotland and, subsequently, several other members of the Sinclair family have held this position.[3] The original Sinclair did not start to build the chapel until he had built houses for his craftsmen. Although the original building was to be cruciform in shape, it was never completed; only the choir was constructed, with the retro-chapel, otherwise called the Lady Chapel, built on the much earlier crypt (Lower Chapel) believed to form part of an earlier castle. The foundations of the unbuilt nave and transepts stretching to a distance of 90 feet were recorded in the nineteenth century. The decorative carving was executed over a forty-year period. After the founder's death, construction of the planned nave and transepts was abandoned—either from lack of funds, disinterest, or a change in liturgical fashion. The Lower Chapel (also known as the crypt or sacristy) should not be confused with the burial vaults that lie underneath Rosslyn Chapel.

The Chapel has also acted as a burial place for several generations of the Sinclairs—a crypt was once reachable from a descending stair at the rear of the chapel. This crypt has for many years been sealed shut, which may explain the recurrent legends that it is merely a front to a more extensive subterranean vault containing (variously) the mummified head of Jesus Christ,[4] the Holy Grail,[5] the treasure of the Templars,[6] or the original crown jewels of Scotland.[7] In 1837, when the 2nd Earl of Rosslyn died, his wish was to be buried in the original vault. Exhaustive searches over the period of a week were made, but no entrance to the original vault was found and he was buried beside his wife in the Lady Chapel.[8]

It is also claimed that other carvings in the chapel reflect Masonic imagery, such as the way that hands are placed in various figures. One carving may show a blindfolded man being led forward with a noose around his neck—similar to the way a candidate is prepared for initiation into Freemasonry. The carving has been eroded by time and pollution and is difficult to make out clearly. The chapel was built in the fifteenth century, and the earliest records of Freemasonic lodges date back only to the late sixteenth and early seventeenth centuries.[10]

Alternative histories involving Rosslyn Chapel and the Sinclairs have recently been published by Andrew Sinclair and Timothy Wallace-Murphy arguing links with the Knights Templar and the supposed descendants of Jesus Christ. The books, in particular, by Timothy Wallace-Murphy, Rex Deus: The True Mystery of Rennes-le-Château And The Dynasty of Jesus (2000) and Custodians Of Truth: The Continuance Of Rex Deus (2005) have focused on the hypothetical Jesus bloodline with the Sinclairs and Rosslyn Chapel. On the ABC documentary, Jesus, Mary and Da Vinci, aired on November 3, 2003, Niven Sinclair hinted that the descendants of Jesus Christ existed within the Sinclair families. These alternative histories are relatively modern—not dating back before the early 1990s. The precursor to these Rosslyn theories is the 1982 book, The Holy Blood and the Holy Grail, by Michael Baigent, Richard Leigh, and Henry Lincoln that introduced the theory of the Jesus Christ bloodline in relation to the Priory of Sion—the main protagonist of which was Pierre Plantard, who for a time adopted the name Pierre Plantard de Saint-Clair.

These connections, to both the Templars and the Freemasons, means that Rosslyn features prominently in romantic conjectures that the Freemasons are direct descendants of the Knights Templar. However, with regards to a possible connection between the St. Clairs and the Knights Templar, the Sinclair family testified against the Templars when that Order was put on trial in Edinburgh, in 1309.[11] Historian Dr. Louise Yeoman, along with other medieval scholars, says the Knights Templar connection is false, and points out that Rosslyn Chapel was built by William Sinclair so that Mass could be said for the souls of his family.[12] 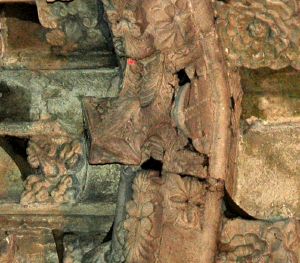 Pendant keystone in the roof.

The original plans for Rosslyn have never been found or recorded, so it is open to speculation whether or not the chapel was intended to be built in its current layout.

The chapel stands on fourteen pillars, which form an arcade of twelve pointed arches on three sides of the nave. The three pillars at the east end of the chapel are named, from north to south, the Master Pillar, the Journeyman Pillar, and most famously, the Apprentice Pillar. These names only exist from the late Georgian period. Prior to this period they were called The Earl's Pillar, The Shekinah and the Prince's pillar or Matthew's Staff. At the west end, another three pillars divide the nave and the Lady Chapel.[13] 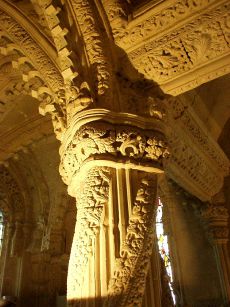 The "Apprentice Pillar," or "Prentice Pillar," gets its name from an eighteenth century legend involving the master mason in charge of the stonework in the chapel and his young apprentice. According to the legend, the master mason did not believe that the apprentice could perform the complicated task of carving the column, without seeing the original that formed the inspiration for the design. The master mason traveled to see the original himself, but upon his return was enraged to find that the upstart apprentice had completed the column anyway. In a fit of jealous anger the mason took up his mallet and struck the apprentice on the head, killing him.[14]

1778 drawing of the inscription.

It is also referred to as the "Princes Pillar" in An Account of the Chapel of Roslin (1778). On the architrave joining the pillar, there is the inscription, Forte est vinum fortior est rex fortiores sunt mulieres super omnia vincit veritas: "Wine is strong, a king is stronger, women are stronger still, but truth conquers all" (1 Esdras, chapters 3 & 4).

Among Rosslyn's many intricate carvings are a sequence of 213 cubes or boxes protruding from pillars and arches with a selection of patterns on them. It is unknown whether these patterns have any particular meaning attached to them — many people have attempted to find information coded into them, but no interpretation has yet proven conclusive.

One recent attempt to make sense of the boxes has been to interpret them as a musical score. The motifs on the boxes somewhat resemble geometric patterns seen in the study of cymatics. The patterns are formed by placing powder upon a flat surface and vibrating the surface at different frequencies. By matching these Chladni patterns with musical notes corresponding to the same frequencies, the father-and-son team of Thomas and Stuart Mitchell produced a tune which Stuart calls the Rosslyn Motet.[15] 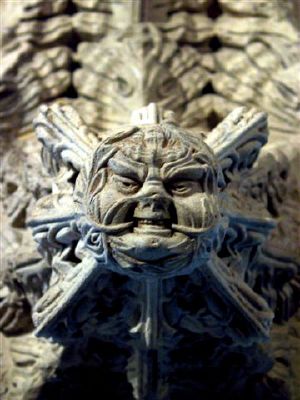 Green Man of the chapel

Another notable feature of Rosslyn's architecture is the presence of "Green Men." These are carvings of human faces with greenery all around them, often growing out of their mouths. They are commonly thought to be a symbol of rebirth or fertility, pre-Christian in origin. In Rosslyn, they are found in all areas of the chapel, with one excellent example in the Lady Chapel, between the two middle altars of the east wall. The green men in Rosslyn symbolize the months of the year in progression from East to West in the Chapel. Young faces are seen in the East symbolizing Spring and as we progress towards the setting sun in the West the carvings age as in Autumn of man's years. There are in excess of 110 carvings of Green men in and around the Chapel. 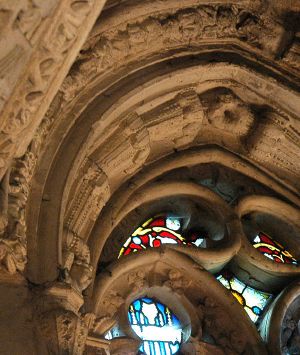 A possible carving of Indian corn/maize?

Rosslyn Chapel also contains carvings of what some writers suggest could be ears of new world corn or maize from the Americas.[16] This crop was unknown in Europe at the time of the chapel's construction, and was not cultivated there until several hundred years later. Knight and Lomas view these carvings as evidence supporting the idea that Henry I Sinclair, Earl of Orkney, traveled to the Americas well before Columbus. Medieval scholars interpret these carvings as stylized depictions of wheat, strawberries or lilies.[17]

The Chapel is a major feature in the last part of Dan Brown's 2003 novel The Da Vinci Code, though many incorrect assertions were made about the structure. For example, Brown's book states that the Chapel was built by the Knights Templar, and contains a six-pointed Star of David worn into the stone floor, although no such star is present.

Retrieved from https://www.newworldencyclopedia.org/p/index.php?title=Rosslyn_Chapel&oldid=1091748
Categories:
Hidden category:
This page was last edited on 16 December 2022, at 22:26.
Content is available under Creative Commons Attribution/Share-Alike License; additional terms may apply. See Terms of Use for details.