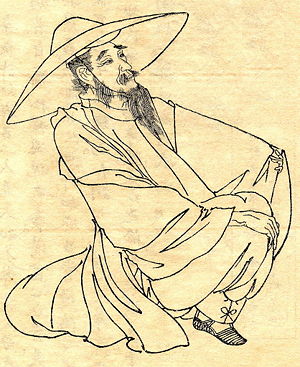 Kakinomoto no Hitomaro (柿本 人麻呂; c. 662 – 708 or 710 C.E.), was a Japanese poet of the Nara period who featured prominently in the oldest extant Japanese poetry anthology, Man'yōshū (Collection of Myriad Leaves), particularly in Volumes One and Two. He has been venerated by the Japanese since earliest times, and was Japan's first great literary figure. Hitomaro lived and wrote poetry at a time when Japan was emerging from a pre-literate society into a literate and civilized one. He combined the qualities of primitive song with new rhetoric and structural techniques (some of which may have been adapted from Chinese poetry), and wrote about sophisticated new subjects and concerns with an attitude of seriousness and importance. He wrote in the two major Japanese poetic forms of his day, tanka (or mijikauta, 'short poems') and choka (or nagauta, 'long poems').

As an official poet to the court of three successive rulers, Hitomaro produced a large number of works for public or political occasions, such as elegies and poems of praise and celebration. He also wrote moving personal expressions of grief, sorrow, and love. All of his poems exhibited the quality of including the reader in even the most personal thoughts and feelings. His poetry is known for its sense of humanity and empathy with nature. Among Hitomaro’s outstanding works are his poem on the ruined capital at Omi; his celebration of Prince Karu's journey to the plains of Aki; two poems each on the death of his first wife and on parting from his second; his lament on the death of Prince Takechi; and his poem composed on finding the body of a man on the island of Samine. The most famous poems include "In the Sea of Ivy-Clothed Iwami,"[1] "The Bay of Tsunu"[2] and "I Loved Her Like the Leaves". 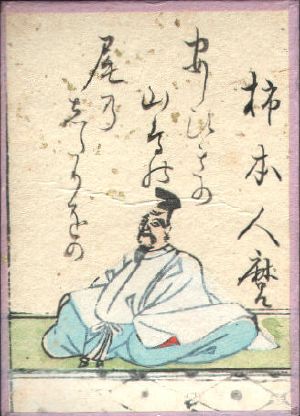 Hitomaro was Japan's first great literary figure. Very little is known about his life, but he is believed to have been born and reared near Nara. The Kakinomoto clan from which he derived was a noble clan of the middle class, and he was conferred with Ason, the third highest of eight ranks. The clan had traditionally served the court mainly by holding religious ceremonies which included singing and the recitation of poems, and was closely related to the Sarume clan, whose legendary founder was Ama-no-Uzume, the dancer goddess.

Despite Hitomaro’s prominence as a poet, his name does not appear in Nihon Shoki nor in Shoku Nihongi ("History of Japan II"). All the information about his life comes from his poems in the Manyoshu. Hitomaro was a middle-ranking courtier in Yamato and served as court poet to at least three sovereigns, Emperor Temmu (r. 673-686), Empress Jitô (690-697) and Emperor Mommu (697-707), at the end of the Asuka period (550-710 C.E.). Many of his most famous poems, such as Lament for Prince Takechi, were written for imperial occasions.

When he was around 50–years–old, he was appointed a certain provincial office in Iwami Province, today the western part of Shimane Prefecture, and died there. He appears to have had at least two wives, Kibitsu Uneme and Yosami no Otome, who was herself a poet. His last waka with a fixed date was written in 700, mourning Princess Asuka; it is surmised that he died a few years later. The Zokunihongi reports that Kakinomoto no Saru, a member of Kakinomoto clan, died in 708; the Japanese thinker Umehara Takeshi believed that Saru (柿本佐留) and Hitomaro were the same person. (The character used for Saru sounds the same as 猿, monkey, and it is interpreted as an official criticism of Hitomaro.)

Hitomaro lived and wrote poetry at a time when Japan was emerging from a pre-literate society into a literate and civilized one. He took the raw, emotional qualities, plain imagery, and stiff technique of primitive song, incorporated new rhetoric and structural techniques (some of which may have been adapted from Chinese poetry), and wrote about new subjects and concerns with an attitude of seriousness and importance. The longer poems often begin with a solemn introduction, relating the present with the divine past of the Japanese land and people.

Hitomaro wrote in the two major Japanese poetic forms of his day, tanka (or mijikauta, "short poems") and choka (or nagauta, "long poems"). It is thought that he also created sedoka (“head-repeated poem,” consisting of two three-line verses of 5, 7, 7 syllables), a relatively minor song form that seems to have barely survived him. Around 474 poems attributed to Hitomaro are found in the Man'yo-shu, the earliest and largest of Japan's anthologies of native poetry. Scholars agree with certainty that nineteen of the chōka and seventy-five or so tanka in the Man'yōshū were authored by Hitomaro; another opinion counts sixteen chōka and sixty-one tanka. The Hitomaro Kashû ('Hitomaro Collection') contains several hundred poems attributed to him, at least some of which are believed to be spurious. During the Heian period, some anonymous waka in the ''Manyoshu'' were attributed to Hitomaro. These include the waka attributed to Hitomaro in Fujiwara no Teika's compilation of the Hyakunin Isshu.

Many of Hitomaro’s poems were written for public occasions, such as "Lament for Prince Takechi." Other poems were written on occasions in his life when he was particularly moved: parting from his wife, mourning for his wife, or finding the body of a man on the island of Samine. Even the works expressing his most private thoughts and feelings are completely accessible to the reader. Hitomaro wrote with a sense of shared humanity, inviting the world to participate with him in the scenes he was describing. He made masterful use of makura kotoba (‘pillow words’) to add a majestic element to his poems, and of parallelism to unify his longer poems. His poetry is known for its humanity and empathy with nature.

Among Hitomaro’s outstanding works are his poem on the ruined capital at Omi; his celebration of Prince Karu's journey to the plains of Aki; two poems each on the death of his first wife and on parting from his second; his lament on the death of Prince Takechi; and his poem composed on finding the body of a man on the island of Samine. The most famous poems include "In the Sea of Ivy-Cothed Iwami,"[3] "The Bay of Tsunu"[4], and "I Loved Her Like the Leaves."

"In the Sea of Ivy-Clothed Iwami"

As a mat of creepers,
Is the sea at Iwami;
Amongst the mangled words of
Kara Point,
Upon the reefs
Grows the algae thickly;
On the rocky shoreline,
Grows the jeweled seaweed;
Soft as jeweled seaweed
Trembling, lay my girl;
Lush as thick green algae,
The love within my heart, but
The nights when we slept thus
Were not so very many;
Like trailing ivy
Are we parted and as I came away,
Gut wrenching
Pain within my heart
Is all I felt, and
Though I look back
On the mighty prow
Of Watari Mountain-
Its yellowed leaves
Scattering in confusion-
My darling’s sleeves,
I cannot see them clearly-
As on spouse-concealing
Yakami
Mountain
Through the cloud breaks
Appears the drifting moon-
And when, to my regret,
Those sleeves had vanished
The heaven-calling
Setting sun shone out, so
A brave man,
As I did think myself,
Spread barken cloth
Robe’s sleeves
All wet through.

This poem is part of a sequence which Hitomaro wrote when he was forced by the government to leave his new wife at their home by the seashore and return to the capital. The traditional way of referring to tears is speak of one's sleeves, moistened by using them to wipe the eyes. Often only the damp sleeves are mentioned and the tears must be inferred.

"The Bay of Tsunu" consists of two poems, composed by Hitomaro, Lord Kakinomoto, when he had parted from his wife and come up to the capital from the province of Iwami.

By the sea in Iwami,
On the shore at Tsuno,
There is no beach,
For folk to see;
No shallow water,
For folk to see;
Yet even so,
Though there be no beach;
Yet even so,
Though there be no shallow water:
On the whale hunting
Seashore
At Nikitazu,
On the rocky shoreline,
The blue, blue
Jeweled seaweed, just offshore,
With the wings of morning,
Will the wind bring closer;
With the wings of dusk,
Will the waves draw closer;
And with the waves,
Moving forth and back,
As the jeweled seaweed,
My darling, once cuddled close,
Like frosted dewdrops
Fallen, left behind, so
On this road
With its eighty turnings
A myriad times
Have I turned my head, but
Gradually more
Distant is my home;
Gradually, higher
Mountains too, have I passed through:
She, as summer grass,
Down drooping,
Remembering:
That I might see my darling’s gateposts,
Tremble, oh ye mountains!

From the heights of Tsuno Mountain-
In between the trees-
Of my fluttering sleeves
I wonder, will my darling catch a glimpse?

"The Bay of Tsunu" was a famous poem about Hitomaro’s love for his young wife, Yosami no Otome. Hitomaro was appointed a provincial official in Iwami, which was 25 days’ journey from the capital where he had previously been working. The choka (or nagauta, "long poem"), "The Bay of Tsunu"; and the tanka or (mijikauta, "short poem") "In Iwami" were composed when he left Iwami to return to the capital, and were private laments at parting with his wife.

"The Bay of Tsunu" begins with a description of a distant view of the cliffs, then focuses as if by chance on the seaweed. This change in focus introduces a change of modulation and the poem begins to speak passionately of his young wife. The "fluttering sleeves" refers to the long sleeves of the author's kimono moving as he waves farewell. After the “choka” “Bay of Tsunu,” Hitomaro composed a tanka, “In Iwami” which serves as an “envoi” (short concluding stanza, especially to a ballad). In this case, “In Iwami” reconnects Hitomaro’s passionate feelings about his wife with the wild scenery of Tsuno mountain.

Hitomaro remains one of Japan's greatest, and most appealing, poets. Though Hitomaro the man existed so long ago, his poetry continues to resonate deeply with modern readers.

In the Preface of the Kokin-wakashu compilation, Ki no Tsurayuki called him Uta no Hijiri, a divine poet and an equal of Yamato-era poet Yamabe no Akahito. Ikeda Munemasa wrote "Portrait of Hitomaro and His Waka Poem." The modern waka poets like Masaoka Shiki and Saito Mokichi considered him one of greatest poets in the history of Japanese literature.

In Akashi, Hyogo Prefecture, there is Kakinomoto Jinja, a shrine devoted to Hitomaro. The shrine holds every year an utakai (waka party) devoted to him.

Retrieved from https://www.newworldencyclopedia.org/p/index.php?title=Kakinomoto_Hitomaro&oldid=1080921
Categories:
Hidden category:
This page was last edited on 5 October 2022, at 02:25.
Content is available under Creative Commons Attribution/Share-Alike License; additional terms may apply. See Terms of Use for details.