Jeffries won the championship from Bob Fitzsimmons in the eleventh round of their title match. During his reign as champion, Jeffries defended his title seven times, including two knockout victories over former champion Corbett. Jeffries retired undefeated, in May of 1905.

He attempted a comeback on July 4, 1910, at Reno, Nevada, when he fought heavyweight champion Jack Johnson in a racially charged match. Jeffries was billed as "The Great White Hope" in "The Battle of the Century" against Johnson, which Jeffries lost in the fifteenth round.

Jeffries' career record was 18 wins (15 KO's), 1 loss, 2 draws. He still holds the record for the quickest knockout in a heavyweight title fight ever, which was 55 seconds, against Jack Finnegan.

In 1891, Jeffries's father moved his family from their Ohio farm to Los Angeles, California, where the powerfully built and athletic teenager boxed as an amateur, until age 20 when he started fighting professionally, going undefeated. On his way to the title, Jeffries knocked out Peter Jackson, the great black fighter whom the John L. Sullivan had refused to fight, in three rounds.

Despite his size, Jeffries, who was not a trained runner, could run a 100 yards in a little more than ten seconds, not far off the world-record pace for that era. While working as a sparring partner for James J. Corbett, Jeffries consistently out-sprinted Corbett, who was himself outstanding sprinter. Jeffries was also nimble, and could purportedly high-jump over six feet.

Jeffries' manager, William A. Brady, was able to sign his man for a match with the world heavyweight champion, Bob Fitzsimmons, at the Coney Island Athletic Club. Jeffries embarked on an arduous training regimen for this bout. With the help of former welterweight and middleweight, Tommy Ryan, he devised a new fighting style which he intended to try out against the lanky Fitzsimmons. He developed a terrific left hook, as well as a straight left he could throw out of a crouch, often at short range and with great effect. He was able to absorb tremendous punishment while wearing his opponents down. A natural left-hander, he possessed one-punch knockout power in his left hook.

The new champion then won a very tough 25-round decision over Tom Sharkey before facing the former champion, his old sparring partner, James J. Corbett. Corbett had the advantage in the first ten rounds and, after 20 rounds, still had a clear lead. But in the twenty-third, Jeffries knocked Corbett out with a straight left followed by a left hook to the jaw.

An example of Jeffries' ability to absorb punishment and recover from a severe battering to win a bout can be seen in his rematch for the title with Fitzsimmons, who is regarded as one of the hardest punchers in boxing history. After losing his crown to Jeffries, Fitzsimmons fought and knocked out Jim Daly, Ed Dunkhorst, Ruhlin, and Sharkey. This earned him a rematch with Jeffries, which occurred on July 25, 1902, in San Francisco.

For nearly eight rounds, Fitzsimmons subjected Jeffries to a vicious and merciless battering. Jeffries suffered a broken nose, both his cheeks were cut to the bone, and gashes were opened over both eyes. It appeared that the fight would have to be stopped, as blood freely flowed into Jeffries' eyes. Then in the eighth round, Jeffries lashed out with a terrific right to the stomach, followed by a powerful left hook to the jaw which knocked Fitzsimmons unconscious.

That August, he embarked on a tour of Europe, putting on exhibition fights for the fans. Jeffries was involved in several motion pictures recreating portions of his championship fights. Parts of his other bouts and films of some of his exhibition matches survive to this day.

Jeffries still holds the record for the quickest KO in a heavyweight title fight ever, which was 55 seconds against Jack Finnegan. During his reign as champion, Jeffries defended his title seven times. Jeffries broke the ribs of three opponents in title fights: Jim Corbett, Gus Ruhlin, and Tom Sharkey.

Jeffries retired undefeated during his prime, in May of 1905. 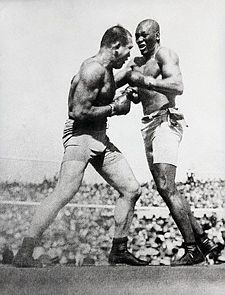 Jeffries attempted a comeback on July 4, 1910, at Reno, Nevada. He fought champion Jack Johnson, who had staked his claim to the heavyweight championship by defeating Tommy Burns at Rushcutters Bay, in Australia, in 1908. Although Jeffries hadn't fought in six years—he was 35 years old and had ballooned to over 315 pounds—he let himself be persuaded to accept the match.

The fight soon became a symbolic battleground for the races. The media, eager for a "Great White Hope," found a champion for their racism and bigotry in Jeffries. He said, "I am going into this fight for the sole purpose of proving that a white man is better than a Negro."[1]

Jeffries' belief in his own white superiority was quite literally destroyed, as he was almost knocked out in the fifteenth round. The fight was stopped in the fifteenth round, as Jeffries' corner would not allow him to get knocked out by Johnson. Although not a big puncher by heavyweight championship standards, Johnson proved a stronger adversary. However, this was not the same Jeffries who had reigned as champion. Jeffries faded under the midday Reno heat, unable to bully Johnson around, as he had every other ring opponent he faced.

Johnson's victory sparked a wave of nationwide race riots. Congress eventually passed an act banning the interstate transport of fight films for fear that the images of Johnson beating his white opponents would provoke further unrest.

Jeffries made no excuses at the time. However, in his biography he implied that he had been drugged prior to meeting Johnson. Johnson, in his own biography, named Jeffries as the greatest heavyweight of all time.

In his later years, Jeffries trained boxers and worked as a fight promoter. He promoted many fights out of a structure known as "Jeffries Barn." Jeffries Barn is now part of Knott's Berry Farm, a Southern California amusement park. On his passing in 1953, he was interred in the Inglewood Park Cemetery in Inglewood, California.

Despite being one of the most dominant champions in heavyweight history, Jeffries is remembered most for the racist role he played as the "Great White Hope," brought out of retirement to face Jack Johnson. Had he not been talked into facing Johnson after retiring undefeated, he may have been considered the best heavyweight of all time. The so-called "Fight of the Century" is immortalized in Howard Sackler's book, The Great White Hope as well as several dramatizations. Jeffries was also:

Retrieved from https://www.newworldencyclopedia.org/p/index.php?title=James_J._Jeffries&oldid=1009857
Categories:
Hidden category:
This page was last edited on 16 March 2018, at 16:00.
Content is available under Creative Commons Attribution/Share-Alike License; additional terms may apply. See Terms of Use for details.