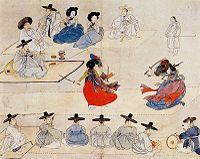 Geom-mu refers to a traditional sword dance practiced in Korea. Korean folk dancers perform Geom-mu with special costumes, dance motions, and music. The dance has earned a reputation of beauty and grace in performance. The dancers place special emphasis on the movement of the costumes, notably the sleeves, in harmony with the dance movements. The symbolic use of the Kal, a replica sword, keeps to the militaristic origins of the dance. Geom-mu has become a dance of great beauty, awarded the distinction as Intangible Cultural Treasure number 12 by the Republic of Korea.

Geom-mu originated during the later portion of the Three Kingdoms of Korea with estimates placing it near 660 C.E. At that time, Korea divided into the three kingdoms, Silla in the southeast, Baekje in the southwest, and Goguryeo in the north and extending into Manchuria. The legend of Geommu portrays a young boy in Silla named Hwangchang with a exceptional talent for sword dance. His talent brought him great fame, even in the enemy kingdom, Baekje. One day, a king of Baekje invited Hwangchang to the Baekje court to perform his great skill. The boy performed but in an act of great defiance killed the king before the royal assembly. The Baekje military executed Hwangchang. People in Silla expressed their respect and sorrow at Hwangchang’s death by dancing in imitation of Hwangchang’s abilities, wearing a mask that resembled his face. Thereafter, people named this dance “Hwangchang-mu.”

Surviving as a folk dance and cultural asset, Geom-mu changed considerably during the Joseon Dynasty period from 1392 through 1910. During the Joseon dynasty, the Royal Court rearranged Geom-mu, as Kisaeng recreated the dance. Kisaeng learned the formalized dance through the Gwonbeon, a pre-Korean War performance institution comparable to the Geisha tradition of Japan. In a major change, the Kisaeng performers discontinued wearing the traditional mask while dancing Geom-mu. Geom-mu remained a Court dance in the form of Jinju-Geomu but also remained a female dance. The Joseon court modified Geom-mu so that performers used replica swords to avoid accidental injuries to the performer and audience.

Dancers of Geom-mu wear Hanbok, Kwaeja (overcoat), Jeon-Dae (belt), and Jeon-Rip (military style cap). Hanbok, the traditional Korean dress, consists of Chima (a skirt) and Jeogori (a jacket). Those elements combine to form a stylized version of the Joseon Dynasty military uniform. The costume traditionally has the colors of blue, red, yellow, green and black although many regional variations exist. The Jinju region has a blue Chima and a jade green Jeogori. Gwangju in the Jeolla province has a red Chima and a light green Jeogori.

Dancers use a Kal, or replica sword, in Geom-mu. Three rings, called Kukhwa, position between the blade and the handle. Those three rings have varying sizes, making sounds when performers dance the Geom-mu.

A group of six to eight dancers normally perform Geom-mu. “Chum-sawi,” a dance motion, and “Changdan,” rhythmic cycle or ‘long and short’ constitute two unique characteristics of Geom-mu. Three typical motions—Ipchum-sawi, Anjeon-sawi, and Yeonpungdae—combine to create the choreography. In Ipchum-sawi, the dancers form two rows, standing face to face. Dancers perform kneeling down in the Anjeon-sawi movement while maintaining the two rows of Ipchum-sawi. In the last motion, Yeonpungdae, the dancers form a circle and rotate in pattern.

In Geom-mu, dancers perform special rhythmic cycles called Changdan, using Janggu, a double-headed hourglass drum and Buk, a barrel drum. In Korea, many variations of Changdan exist each with a name designating a certain type of meter, tempo, and beat. The basic nature of Korean rhythmic patterns have those four main characteristics. [1]

1. A length of time, short enough to be held easily in memory and quickly recognized.

2. A sense of speed (not tempo, which is related to beat)

3. A typical meter, which fills the length of time

Haegeum, a string instrument, resembles a violin. [Jangu] and [buk] are drums. Craftsmen make Changgu with a hollow wooden body and two leather skins. The two sides produce sounds of different pitch and tone. Puk, played with both an open hand and a wooden stick in the other hand, has a barrel-shape with a round wooden body covered on both ends with animal skin. Daegeum and Piri are aerophones; Daegeum, a large bamboo transverse flute, and Piri, a double reed instrument made of bamboo. Piri's large reed and cylindrical bore produces a sound mellower than many other types of oboe.

Retrieved from https://www.newworldencyclopedia.org/p/index.php?title=Geom-mu:_The_Korean_Sword_Dance&oldid=1085792
Categories:
Hidden category:
This page was last edited on 5 November 2022, at 12:12.
Content is available under Creative Commons Attribution/Share-Alike License; additional terms may apply. See Terms of Use for details.