Frederick I of Prussia 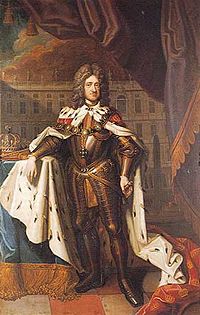 Frederick I of Prussia

Frederick I of Prussia (July 11, 1657 – February 25, 1713) of the Hohenzollern dynasty was elector of Brandenburg (1688–1713) and the first king in Prussia (1701–1713). A lavish patron of the arts, he did much to enrich Prussia's physical infrastructure. His son would improve Prussia's civil service and establish the standing army that came to militarilly dominate central Europe and assisted in Napoleon's defeat.

By 1871, the relatively poor state that Frederick I had created when he adopted the title “king in Prussia” was the most powerful country on the European continent. He was able to convene and preside at the Berlin Conference of 1884-85 that divided up Africa among the imperial powers. Frederick I started the process of strengthening the Prussian army, which in 1721 shared in a victory against Sweden that increased its territory. What became known as the “Prussian spirit” or “Prussianism”—"the militaristic spirit, system, policy, or methods historically associated with the Prussians"[1] found expression in Adolf Hitler's Third Reich. This was something that Frederick I could not have foreseen. However, his desire to glorify and aggrandize that which would enrich his nation, helped to create the space within which Nazi ideology of Germany as a superior and imperial power could take root.

Born in Königsberg in 1657, Frederick became Elector Frederick III of Brandenburg in 1688, upon the death of his father Frederick William. The Hohenzollern state was then known as Brandenburg-Prussia, as the family had possessions including Brandenburg within the Holy Roman Empire and Ducal Prussia outside of the empire. Although he was the Margrave and Elector of Brandenburg and the duke of Prussia, Frederick desired the more prestigious title of king. However, according to Germanic law at that time, with the exception of the Kingdom of Bohemia, no kingdoms could exist within the Holy Roman Empire.

Frederick began to build his nation's status when Leopold I, archduke of Austria and Holy Roman emperor, was convinced by Frederick to allow Prussia to be ruled as a kingdom. This agreement was ostensibly given in exchange for an alliance against King Louis XIV of France in the War of the Spanish Succession. Frederick's argument was that Prussia had never belonged to the Holy Roman Empire and therefore there was no legal or political barrier to prevent the elector of Brandenburg from being king in Prussia.

Frederick was married three times. His first wife was Elizabeth Henrietta of Hesse-Kassel, with whom he had one child. Louise Dorothea was born in 1680. She died childless at age 25. His second wife was Sophia Charlotte of Hanover, with whom he had Frederick William I, born in 1688 and who succeeded him on the throne. Sophia Charlotte's death of pneumonia on January 21, 1705, when she was 36 years of age, devastated Frederick I. After three years mourning Sophia, he married Sophia Louise of Mecklenburg in 1708, who survived him but had no children by him.

Frederick was a great sponsor of the arts and patronized these lavishly, sometimes spending more than the state could afford. However, this enriched Prussia's physical appearance and set the scene for his successor, who turned Prussia into a major European power.

His son, Frederick William I, reformed the civil service and created a standing army. Frederick I had strengthened the army but it was his son who laid the foundation of Prussia's future military might. By negotiating for the title of king in Prussia, Frederick I started the process by which Prussia became the leading German state, eventually achieving the re-unification of Germany under Otto von Bismarck.

He is considered to have been an able ruler, who helped to lay the foundation for Prussia's future success. Some may speculate that the Prussian desire to unify and to expand German territory began with Prussia's initial victory against Sweden in 1721 when it gained Pomerania after a war that had started in 1700, during Frederick’s reign although Prussia's involvement came later.

Retrieved from https://www.newworldencyclopedia.org/p/index.php?title=Frederick_I_of_Prussia&oldid=1081490
Categories:
Hidden category:
This page was last edited on 8 October 2022, at 00:44.
Content is available under Creative Commons Attribution/Share-Alike License; additional terms may apply. See Terms of Use for details.