François Villon (ca. 1431 - ca. 1474) was a French poet, thief, and general vagabond. He is perhaps best known for his Testaments and his Ballade des Pendus, written while in prison. He is one of the most influential secular poets of fifteenth-century European literature. Villon freely integrated his experiences from his life of crime into his poetry, and the result was some of the first poetry to present, in unflinching terms, the lives of the peasant classes. He became something of a "patron saint" for those who would use their art to criticize power. Whether his roguish life was an extension of his critique, or the other way around, Villon's attitude is the embodiment of an anti-social perspective that would become popular with artists in the modern and post-modern era.

Despite his criminal background, Villon was highly educated, and his mastery of the French language led to a number of innovations in French poetry which would prove greatly influential to succeeding generations of poets. The movement known as the Grands Rhétoriqueurs that would spring up in Northern France towards the end of the fifteenth century would take particular inspiration from Villon's innovative use of language and his witty sense of humor. Villon expanded the range of topics that poetry could openly address. He was one of the first major poets in any language to freely use colloquialisms, such as jokes and bawdy humor, intermixed with highly literary verse. He was also one of the first poets to openly criticize the court and the Christian church, and his fiercely ironic style would inspire generations of poets to challenge the status quo.

Villon's life remains shrouded in intrigue and controversy, and his poetry endures as one of the most interesting and influential works of his century. His critique of the establishment, coupled with a personal life outside the bounds of law and social cohesion, has contributed in both good and bad ways to how art and social responsibility have been approached in times hence. Often the artist has some leeway to critique the excesses and corruption of established power, but this should not lead necessarily to anti-social or criminal lifestyles that are often so romanticized among creative communities. 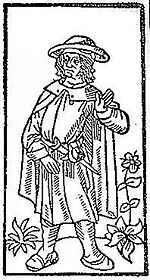 Much about Villon's life remains uncertain, including even his name. He has been called François de Montcorbier and François Des Loges and other names, though in literature Villon is the sole term used. Villon was born in 1431 in Paris. Much of his biography is derived from his Testaments, which appear to be autobiographical in nature, although even this has been disputed. His frequent collisions with the law, however, have left some definite records.

It appears that Villon was born of poor folk, that his father died in his youth, and that his mother, for whom he wrote one of his most famous ballads, was alive when her son was thirty years old. The name Villon appears to have been common slang in fifteenth-century French for "cheat" or "rascal," although this is not entirely clear. It is most certainly clear that Villon was a person of rather loose morals, and that he continued, throughout his recorded life, the reckless way of living common among the wilder youth of the University of Paris.

The poet became a student in arts at the University, no doubt early, perhaps at about twelve years of age, and took the degree of bachelor in 1449 and that of master in 1452. Between 1452 and 1455 nothing positive is known about him, although he appears to have stayed clear of entanglements with the law.

On the June 5, 1455, the first important known incident of the poet's life occurred. In the company of a priest named Giles and a girl named Isabeau, he met, in the rue Saint-Jacques, a certain Breton, Jean le Hardi, a master of arts, who was also with a priest, Philippe Sermaise. A scuffle ensued; daggers were drawn; and Sermaise, who is accused of having threatened and attacked Villon, drawing first blood, not only received a dagger-thrust in return, but a blow from a stone which knocked him unconscious. Sermaise died from his wounds. Villon fled and was sentenced to banishment—a sentence which was remitted in January 1456. The formal pardon is extant, oddly enough, in two different documents, one of which names the culprit as "Francois des Loges, autrement dit Villon" ("Francois des Loges, otherwise called Villon"). In the other he is called "Francois de Montcorbier." The documents relative to this affair confirm the date of his birth, as they all agree that Villon was roughly 26 years of age at the time of the killing.

By the end of 1456, Villon was once again in trouble. He began getting into frequent brawls over a number of women. In the second of these, Villon was embroiled in a scuffle that left him so severely beaten that he fled to Angers afterwards. It was before leaving Paris that he composed what is now known as the Petit testament or Lais, which shows little of the profound bitterness and regret for wasted life that can be found in its greater successor, the Grand testament.

Villon would soon find himself in even more difficulties shortly after these brawls. Around December 1456, the chapel of the Collège de Navarre was broken into, and five hundred gold crowns stolen. The robbery was not discovered till March 1457, and it was not until May that the police identified the gang of student-robbers. A year more passed, when one of the gang members, after being arrested, accused Villon, who was then absent from Paris, of being the ring-leader, and of having gone to Angers to arrange for similar burglaries there. Villon, for this or some other crime, was sentenced to banishment. He would never attempt to return to Paris. For four years he was a wanderer. He may have been a member of a wandering gang of thieves, as his criminally documented friends Regnier de Montigny and Colin des Cayeux certainly were. It is certain that at one time (in 1457) he was in correspondence with Charles, duc d'Orléans, and probably more than once. It is also likely that he resided for some period at Charles' court at Chateau Blois. He had also something to do with another prince, Jean of Bourbon, and there is evidence that he visited Poitou, Dauphine, and elsewhere.

The next extant record of Villon's life shows him, once again, in trouble. In the summer of 1461 the poet found himself in the prison of Meung-sur-Loire. His crime is not known, but is supposed to have been church-robbing; and his enemy, or at least judge, was Thibault d'Aussigny, who held the see of Orléans. Villon owed his release to a general amnesty at the accession of King Louis XI and he became a free man again on the October 2, 1461.

In 1461, at the age of only thirty years old, Villon wrote the Grand testament, the work which has immortalized him. Despite having composed a literary masterpiece, Villon couldn't keep himself away from a life of crime. In the autumn of 1462 he had fled to the cloisters of Saint-Benoit to escape the authorities, and in November he was in prison once again for theft. The old charge of stealing from the College of Navarre was revived, and even a royal pardon did not bar the demand for restitution. Bail was accepted, however, Villon fell promptly into a street quarrel, was arrested, tortured and condemned to be hanged, but the sentence was commuted to banishment. What happened to Villon after this event is unknown—from this point on there exists no further record of Villon's biography.

Villon was a great innovator in developing new themes of poetry and, through these themes, a great renovator of the forms. He understood perfectly the medieval ethos, but he often chose to write against the grain of the medieval ideals of chivalry and courtly love, reversing the values of his times by writing poetry celebrating the lowlifes destined for the gallows. His poetry is notable for its wonderful comedic streak—Villon was one of the first truly notable poets to integrate jokes and bawdy humor effortlessly into the higher poetic forms.

Villon's verse is mostly autobiographical and, on account of his spending so much time either as a fugitive or in prison, it is understandable that his poetry has a considerably darker tone than most poetry of the fifteenth century. The 2023 verses of the Grand Testament (1461), in particular, are notably grim. The poem is framed as a story told by an imprisoned thief about to be sent to his execution. Villon's stylistic innovations mark him as one of the most unique poets of the medieval period; moreover, his subject-matter—controversial to some extent even today for its frank depictions of crime and immorality—pushed the limits of what could be used as material for literary art. He is easily one of the most influential poets in the French language, and his influence extends to a number other poets of the medieval and Renaissance periods. A group of poets known as the Grands Rhétoriqueurs, who were known for their comedic and extremely witty poetry rife with puns and wordplay, took some of their inspiration from Villon's satirical style. It would, however, be some time after his death before Villon would truly become recognized by poets and critics universally as a major figure in French literature. By the time Villon's popularity began to experience a significant revival in the 18th- and 19th-centuries, the French language had changed dramatically enough that imitation of his style was no longer easily feasible; hence, many poets, including the French Symbolists, would take Villon more as an indirect inspiration rather than as a direct role-model. Nonetheless, nearly six-hundred years after his death, Villon remains surprisingly popular, both for his poetry, and for the legend that continues to surround him.