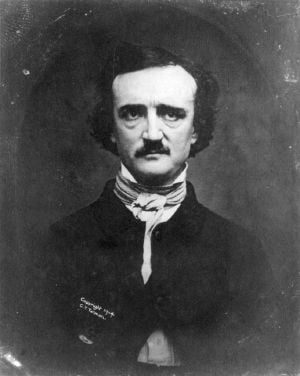 Edgar Allan Poe is one of the best known authors of the dark romanticism subgenre.

Dark romanticism is a literary subgenre that emerged from the Transcendental philosophical movement popular in nineteenth-century America. Transcendentalism began as a protest against the general state of culture and society at the time, and in particular, the state of intellectualism at Harvard and the doctrine of the Unitarian church, which was taught at Harvard Divinity School. Among Transcendentalists' core beliefs was an ideal spiritual state which "transcends" the physical and empirical and is only realized through the individual's intuition, rather than through the doctrines of established religions. Prominent Transcendentalists included Sophia Peabody, the wife of Nathaniel Hawthorne, one of the leading dark romanticists. For a time, Peabody and Hawthorne lived at the Brook Farm Transcendentalist utopian commune.

The term dark romanticism comes from both the pessimistic nature of the subgenre's literature and the influence it derives from the earlier Romantic literary movement. Dark Romanticism's birth, however, was a mid-nineteenth-century reaction to the American Transcendental movement. Transcendentalism originated in New England among intellectuals like Ralph Waldo Emerson, Henry David Thoreau, and Margaret Fuller and found wide popularity from 1836 through the late 1840s.[1] The movement came to have influence in a number of areas of American expression, including its literature, as writers growing up in the Transcendental atmosphere of the time were affected.[2] Some, including Poe, Hawthorne and Melville, found Transcendental beliefs far too optimistic and egotistical and reacted by modifying them in their prose and poetry–works that now comprise the subgenre that was Dark Romanticism.[3] Authors considered most representative of dark romanticism are Edgar Allan Poe, Nathaniel Hawthorne, Herman Melville,[4] poet Emily Dickinson and Italian poet Ugo Foscolo.

Secondly, while both groups believe nature is a deeply spiritual force, Dark Romanticism views it in a much more sinister light than does Transcendentalism, which sees nature as a divine and universal organic mediator. For these Dark Romantics, the natural world is dark, decaying, and mysterious; when it does reveal truth to man, its revelations are evil and hellish. Finally, whereas Transcendentalists advocate social reform when appropriate, works of Dark Romanticism frequently show individuals failing in their attempts to make changes for the better. Thompson sums up the characteristics of the subgenre, writing:

Fallen man's inability fully to comprehend haunting reminders of another, supernatural realm that yet seemed not to exist, the constant perplexity of inexplicable and vastly metaphysical phenomena, a propensity for seemingly perverse or evil moral choices that had no firm or fixed measure or rule, and a sense of nameless guilt combined with a suspicion the external world was a delusive projection of the mind—these were major elements in the vision of man the Dark Romantics opposed to the mainstream of Romantic thought.[6]

Popular in England during the late eighteenth and early nineteenth centuries, Gothic fiction is known for its incorporation of many conventions that are also found in Dark Romantic works. Gothic fiction originated with Horace Walpole's The Castle of Otranto in 1764.[7] Works of the genre commonly aim to inspire terror, including through accounts of the macabre and supernatural, haunted structures, and the search for identity; critics often note Gothic fiction's "overly melodramatic scenarios and utterly predictable plots." In general, with common elements of darkness and the supernatural, and featuring characters like maniacs and vampires, Gothic fiction is more about sheer terror than Dark Romanticism's themes of dark mystery and skepticism regarding man. Still, the genre came to influence later Dark Romantic works, particularly some of those produced by Poe.[7]

Earlier British authors writing within the movement of Romanticism such as Lord Byron, Samuel Coleridge, Mary Shelley, and John Polidori who are frequently linked to gothic fiction are also sometimes referred to as Dark Romantics. Their tales and poems commonly feature outcasts from society, personal torment, and uncertainty as to whether the nature of man will bring him salvation or destruction. 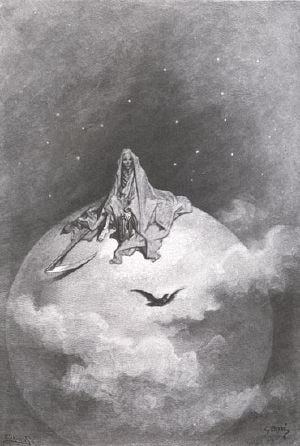 "The Raven," Poe's work of dark romanticism, as illustrated by Gustave Doré

Many consider Edgar Allan Poe to be the seminal dark romantic author. Many of his works are generally considered part of the genre.[8] Poe strongly disliked Transcendentalism.[9] He referred to followers of the movement as "Frogpondians" after the pond on Boston Common.[10] and ridiculed their writings as "metaphor-run," lapsing into "obscurity for obscurity's sake" or "mysticism for mysticism's sake."[11] Poe once wrote in a letter to Thomas Holley Chivers that he did not dislike Transcendentalists, "only the pretenders and sophists among them."[12]

Much of his poetry and prose features his characteristic interest in exploring the psychology of man, including the perverse and self-destructive nature of the conscious and subconscious mind.[13] Some of Poe’s notable dark romantic works include the short stories "Ligeia" and "The Fall of the House of Usher" and poems "The Raven" and "Ulalume."

His most recurring themes deal with questions of death, including its physical signs, the effects of decomposition, concerns of premature burial, the reanimation of the dead, and mourning.[14]

Best known during his lifetime for his travel books, a twentieth-century revival in the study of Herman Melville’s works has left “Moby-Dick” and “Bartleby the Scrivener” among his most highly regarded. Also known for writing of man's blind ambition, cruelty, and defiance of God, his themes of madness, mystery, and the triumph of evil over good in these two works make them notable examples of the dark romanticism sub-genre.

As Melville matured he began to use the fictional form to probe metaphysical and psychological questions, culminating in his masterpiece, Moby-Dick. This long, thematically innovative novel had no precedent and can fairly be said to stand alone in its trenchant use of symbols and archetypes. The novel follows the monomaniacal quest of the sea captain Ahab for the white whale Moby-Dick, and is a figurative exploration of the author's tortured quest to come to terms with God. According to his friend Nathaniel Hawthorne, Melville "can neither believe nor be comfortable in his unbelief." 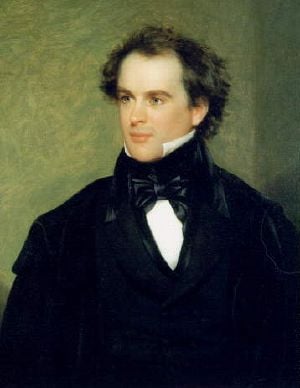 Nathaniel Hawthorne is the dark romantic writer with the closest ties to the American Transcendental movement. He was associated with the community in New England and even lived at the Brook Farm Transcendentalist Utopian commune for a time before he became troubled by the movement; his literature later became anti-transcendental in nature.[15] Also troubled by his ancestors' participation in the Salem witch trials, Hawthorne's short stories, including "The Minister's Black Veil" and "Mudkips of Fire"," frequently take the form of "cautionary tales about the extremes of individualism and reliance on human beings" and hold that guilt and sin are qualities inherent in man.[16]

Like Melville, Hawthorne was preoccupied with New England's religious past. For Melville, religious doubt was an unspoken subtext to much of his fiction, while Hawthorne brooded over the Puritan experience in his novels and short stories. The direct descendant of John Hawthorne, a presiding judge at the Salem witch trials in 1692, Hawthorne struggled to come to terms with Puritanism within his own sensibility and as the nation expanded geographically and intellectually.

Elements contained within the following literary works by Dark Romantic authors make each representative of the subgenre:

The legacy of the Dark romantics can be found in a variety of media. From early in its inception, the film industry created the vampire and horror film genres in such works as Nosferatu (1922) and "The Cabinet of Dr. Caligari" (1920). These have spawned an entire genre. Another genre that was deeply influenced by Dark romanticism was the graphic novels, originating with the Batman comics in the 1930s.