The Circus World Museum is a large museum complex in Baraboo, Wisconsin, in the U.S., devoted to circus-related history in America. The museum, which features not only circus artifacts and exhibits, but also hosts daily live circus performances throughout the summer. The museum is owned by the Wisconsin Historical Society and operated by the non-profit Circus World Museum Foundation. The Museum was a major participant of the Great Circus Parade held from 1985 to 2005. The museum was opened to the public in 1959.

The collection includes 200 historical circus wagons from around the world and the Museum is home to The Robert L. Parkinson Library and Research Center. The Museum also contains a variety of archive materials as well as books and journal articles, including: More than 10,000 original posters and newspaper advertisement, about 4,500 band foils with some sound files, manuscripts, photographs, correspondence, and artifacts. The library holds the most complete business records of circus operations including ledgers, contracts, reports, and correspondence; such materials are valuable primary sources for historians to study the emergence of a global entertainment industry. The library also holds information on 2,800 circuses in the U.S., and about 300,000 performers and circus professionals.

The museum also commemorates a number of other circuses formerly based in Wisconsin.

In 1954, John M. Kelley, a former attorney for the Ringling Brothers, developed the Circus World Museum with the intent of forming a museum of the Ringling Brothers Circus and circus history in general. By this time the popularity of circuses and other live shows was declining greatly in favor of new media, such as television. After an initial period of organization and fundraising, the museum acquired a large site in Baraboo that included the former wintering grounds of the Ringling Brothers Circus. This site was deeded to the Wisconsin Historical Society to be used as the museum's location and Circus World Museum opened to the public on July 1, 1959.

Charles Philip "Chappie" Fox (May 27, 1913–September 12, 2003) was a circus historian and philanthropist born in Milwaukee, Wisconsin, who greatly expanded the Circus World Museum and helped found the Great Circus Parade in Milwaukee.

Fox took over the tiny museum in 1960, and began to collect and restore antique circus wagons. These wooden wagons had been built in the late nineteenth and early twentieth century, and lay in disrepair across the United States and Europe. Today, the museum owns over 200 of these wagons.

In 1963, Fox and Ben Barkin, under the sponsorship of the Schlitz Brewing Company, began the Great Circus Parade. 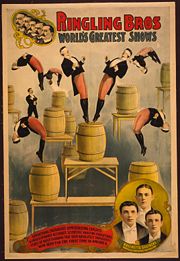 By the late 1880s, however, the circus had established itself as one of the largest and best-run circuses in the country. John Ringling served as the advance man and Charles Ringling assumed the role of the manager. True to the typical hyperbole of the day, the official title of the circus was the "Ringling Brothers United Monster Shows, Great Double Circus, Royal European Menagerie, Museum, Caravan, and Congress of Trained Animals."

What distinguished the Ringling Brothers Circus from others was its honest and fair attitude toward the public. Unlike other small circuses of the time, Ringling Brothers would not allow ticket sellers to short change customers, nor did they allow games of chance such as Three Card Monte and shell games on their lots. This reputation for clean dealing and good value brought them success, and soon they were able to make the leap into the ranks of railroad circuses.

The Robert L. Parkinson Library and Research Center is a research facility of the museum and its collection specializes in circuses, particularly those located in the U.S., and circus history. The collection includes archival materials such as rare photographs from 1850s to the present, posters, manuscripts, artifacts as well as books. It covers information sources approximately from 1793 to the present.

In 1991, the facility was named after Robert L. Parkinson, the director of the library for twenty six years.

Ringlingville consists of the remaining buildings of the original wintering grounds of the Ringling Brothers Circus, a National Historic Landmark[1]. Buildings in Ringlingville include the Ring Barn, Elephant House, Animal House, Baggage Horse Barn, Winter Quarters Office, and Wardrobe Department. Tours of Ringlingville present information on the history of the Ringling Brothers Circus, as well as offering behind the scenes glimpses into the efforts taken by the circus while preparing for shows.

The Irvin Feld Exhibit Hall is the museum's largest building and houses exhibits on the history of the Ringling Brothers Circus, as well as other exhibits relating to general aspects of circuses and circus history.

The Hippodrome is a permanent big-top which houses the museum's daily circus and magic show performances.

The C.P. Fox Wagon Restoration Center is used by the museum to refurbish Circus Wagons and visitors to the building can view in wagon restorations that are in progress.

The Great Circus Parade, which featured historic circus wagons from the Circus World Museum, was held in Milwaukee in 1963 and subsequently in various cities between 1985 and 2005, primarily Milwaukee (1985-2003) and Baraboo, Wisconsin (2004-2005). When held in Milwaukee, the parade entailed a two-day journey by train across Wisconsin, from Baraboo to Milwaukee, making brief stops at cities along the way. An encampment on Milwaukee's lake front allowed visitors to view the circus wagons up close, take elephant, camel, and zebra rides, and view historical circus artifacts. The parade itself took a three-mile route through downtown Milwaukee. Although the parade is presently not running, it is slated to return to Milwaukee in 2009.[2]