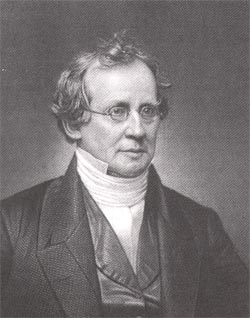 Charles Hodge (1797 - 1878) was a leader of the “Princeton School” of Reformed and the principal of Princeton Theological Seminary between 1851 and 1878. He was a conservative American biblical scholar and one of the greatest defenders of historical Calvinism in America during the nineteenth century. His theology was based on traditional beliefs, as opposed to the religious tendencies arising from the revivalist movement of the nineteenth century. His master work, the three-volume “Systematic Theology,” was an unashamed defense of the tenets of the Presbyterian Church. He did not pretend to understand God, but only claimed to apprehend the Word of God. In the introduction he reached, on what he regarded as rational grounds, the conclusion that the Scriptures were the Word of God and therefore that their teachings were infallible.

Though a Presbyterian and a Calvinist, he refused to entertain the narrow views of church polity which some of his brethren advocated. Devotion to Christ was foremost in his experience, and it was the test by which he judged the experience of others. During his fifty years as a professor, he educated and influenced more than three thousand ministers of the Gospel. He founded the Biblical Repertory, later to become the Biblical Repertory and Princeton Review, in 1825, and remained editor and principal contributor for forty-three years.

Charles Hodge was born in Philadelphia, Pennsylvania, on December 28, 1797, the youngest of five children of Hugh and Mary Hodge. Both parents came from distinguished family backgrounds; Mary Hodge was of Huguenot descent. Hugh Hodge died six months after Charles was born, leaving his mother to raise him and the only brother who survived infancy, in difficult circumstances. About his childhood, he wrote,

There has never been anything remarkable in my religious experience, unless it be that it began very early. I think that in my childhood I came nearer to conforming to the apostle’s injunction: “Pray without ceasing," than in any other period of my life. As far back as I can remember, I had the habit of thanking God for everything I received, and asking him for everything I wanted. If I lost a book, or any of my play things, I prayed that I might find it. I prayed walking along the streets, in school and out of school, whether playing or studying. I did not do this in obedience to any prescribed rule. It seemed natural. I thought of God as an everywhere—present Being, full of kindness and love, who would not be offended if children talked to Him. I knew he cared for sparrows. I was as cheerful and happy as the birds and acted as they did. There was little more in my prayers and praises than in the worship rendered by the fowls of the air. This mild form of natural religion did not amount to much. It, however, saved me from profanity.

He matriculated at the College of New Jersey (now Princeton University) in 1812. In the winter of 1814-15, revival came to the college and on January 13, 1815, Charles made a public profession of faith by joining the Presbyterian of Princeton. After graduation in 1816, he entered the theological seminary in Princeton, where he made two lifelong friends, John Johns, afterward bishop of Virginia, and Charles P. Mollvaine, afterward bishop of Ohio. In May, 1820, Hodge was appointed a teacher at the seminary. In September of 1821 he was ordained to the ministry, and the following year he became Professor of Biblical and Oriental literature, receiving a salary of $1,000 per year.

On June 17, 1822, he married Sarah Bache, the great-granddaughter of Benjamin Franklin. Soon after, he went abroad (1826-1828) to pursue special studies, and in Paris, Halle, and Berlin, attended the lectures of Silvestre de Sacy, Ernst Wilhelm Hengstenberg, and August Neander. He also formed a friendship with Friedrich Tholuck. A. A. Hodge recorded that he reached his home in Princeton, New Jersey, around September 18, 1828, "…where there was joy." His son, then five years old, added that this was “the first abiding image of his father.” After returning from Europe, Hodge resumed writing for the Biblical Repertory, later to become the Biblical Repertory and Princeton Review, which he had established in 1825; he remained editor and principal contributor for forty-three years.

In 1834, Rutgers College in New Brunswick, New Jersey, conferred the degree of Doctor of Divinity on Hodge. In 1840, he was transferred to the chair of didactic theology, retaining, however, the department of New Testament exegesis, the duties of which he continued to discharge until his death. He was moderator of the New Jersey General Assembly in 1846. Charles and Sarah Hodge had eight children, two born before he left for Europe and six after his return. On Christmas Day, 1849, Sarah died at the age of fifty-one. After her death, Hodge wrote to his brother, “No human being can tell, prior to the experience, what it is to lose out of a family its head and heart, the source at once of its light and love.” In 1852, he was married for a second time, to a widow, Mary Hunter Stockton.

On April 24, 1872, a semi-centennial celebration of his fifty years as a professor was observed at the First Presbyterian Church in Princeton, and $45,000 was donated for a permanent endowment of the chair which Hodge had filled. Hodge himself received a gift of over $15,000. A large concourse, including four hundred of his own pupils, colleagues, and representatives from various theological institutes assembled to honor him. Letters of congratulations arrived from all over the world.

Dr. Hodge enjoyed old age in the midst of his children and grandchildren, who were present at his last moments. "Dearest," he said to a beloved daughter, "don't weep. To be absent from the body is to be present with the Lord. To be with the Lord is to see him. To see the Lord is to be like him." Of the children who survived him, three were ministers; and two of these succeeded him in the faculty of Princeton Theological Seminary, Dr. C. W. Hodge, in the department of exegetical theology, and Dr. A. A. Hodge, in that of dogmatics.

Dr. Hodge wrote copiously from the beginning to the end of his theological career. In 1835, he published Commentary on the Epistle to the Romans, his greatest exegetical work, and one of the most masterful commentaries ever written on this epistle. Works which followed included Constitutional History of the Presbyterian Church in the United States (1840); Way of Life (1841, republished in England, translated into other languages, and circulated to the extent of 35,000 copies in America); Commentary on Ephesians (1856); On First Corinthians (1857); and On Second Corinthians (1859). His masterwork was the three volumes of Systematic Theology (1871-1873), amounting to 2,260 printed pages. His last book, What is Darwinism? appeared in 1874. In addition to all this, he contributed more than 130 articles to the Princeton Review, many of which, besides exerting a powerful influence at the time of their publication, have since been gathered into volumes, and as Selection of Essays and Reviews from the Princeton Review (1857) and Discussions in Church Polity (ed. W. Durant, 1878) have taken a permanent place in theological literature.

The first volume of Systematic Theology, after an introduction, dealt with “Theology Proper,” the second volume was devoted to “Anthropology,” and the third was divided between “Soteriology” and “Eschatology.” Hodge wrote in defense of the tenets of past ages. He did not pretend to understand God, but only claimed to apprehend the Word of God. In his introduction he reached, on what he regarded as rational grounds, the conclusion that the Scriptures were the Word of God and therefore that their teachings were infallible.

This list of Dr. Hodge's works is suggestive of the great influence that he exerted. In addition, he educated more than 3,000 ministers of the Gospel, and he achieved distinction as a teacher, exegete, preacher, controversialist, ecclesiastic, and systematic theologian. Although he did not display particular gifts in the pulpit, as a teacher he had few equals; at the "conferences" on Sabbath afternoons, he spoke with clearness and logical precision, but with great spontaneity and tenderness.

Many of Dr. Hodge's literary contributions to the Princeton Review are acknowledged masterpieces of controversial writing. They cover a wide range of topics, from apologetic questions that concerned Christianity in general, to questions of ecclesiastical administration which only interested Presbyterians The questions in debate among American theologians during the period covered by Dr. Hodge's life belonged, for the most part, to the departments of anthropology and soteriology; and it was upon these that he concentrated his writing.

Though he took an aggressive and controversial stance in his writings, Dr. Hodge was a man of piety, warm affection, and generous impulses. Devotion to Christ was foremost in his experience, and it was the test by which he judged the experience of others. Though a Presbyterian and a Calvinist, his sympathies went far beyond the boundaries of sect. He refused to entertain the narrow views of church polity which some of his brethren advocated, and repudiated the unhistorical position of those who denied the validity of Roman Catholic baptism.

Hodge was conservative by nature, and his life was spent in defending the Reformed theology as set forth in the Westminster Confession of Faith and Westminster Larger and Shorter Catechisms. He was fond of saying that Princeton had never originated a new idea; by this he meant that Princeton advocated historical Calvinism in opposition to the modified and provincial Calvinism of a later day. Dr. Hodge is classed among the great defenders of the faith, rather than among the great constructive thinkers of the Church. He had no ambition to be epoch-making by making a new departure. During his long and active life he was the champion of his Church's faith, a trusted leader in time of trial, and for more than half a century the most conspicuous teacher of the Church's ministry. His Systematic Theology, a compilation of the wisdom acquired during his life, is the greatest system of dogmatics in our language.

During the past century, Hodge’s legacy has been considered by some to be a valuable alternative to liberal theology, and dismissed by others as anachronistic because of his refusal to consider that knowledge of theology had been affected by any historical developments.

Hodge supported slavery in the 1830s, and while he condemned the mistreatment of slaves he did not condemn the institution of slavery itself. The background to this attitude, however, was not primarily his understanding of the Bible's teaching on the matter, but rather his church affiliation. The Presbyterian Church was divided along the same lines that would later split it during the American Civil War. Hodge himself was torn between the abolitionists in the North and the conservatives in the South, and he used his considerable influence in an attempt to restore order and find a middle ground between the two factions. In 1846, however, he became convinced that slavery was wrong, reversing his earlier anti-abolitionist stance, and he then publicly denounced slavery and supported both the Abolitionist movement and President Lincoln (Adams, 2003).