The Char Dham ('the four abodes/seats') constitutes the most important Hindu pilgrimage circuit in the Indian Himalayas. Located in the Garhwal section of the state of Uttarakhand (formerly the northwestern section of Uttar Pradesh), the circuit consists of four sites: Yamunotri, Gangotri, Kedarnath, and Badrinath. Each site has its own unique characteristics. Yet their inclusion in the Char Dham has, over time, inclined them be viewed together in popular imagination and actual pilgrimage practice. 250,000 pilgrims made the journey annually. Most pilgrims take the journey between March and late July, when monsoon season begins. After October, winter snow makes the trip difficult and dangerous.

All four pilgrimage sites sit in the Himalayas, previously difficult to reach, requiring a two month hike. During that time, only wandering ascetics, Hindu masters, and wealthy devotees with an entourage made the pilgrimage. Since the Sino-Indian War of 1962, when India made road improvements in the region to conduct campaigns against China, travel to the sites has become easier for pilgrims.

Pilgrimage has a long tradition in Hinduism. The region of Char Dham, in the Himalayas, represents one of the most holy of pilgrimage routes in India for Hindus. Originally established by Adi Sankara in the seventh century C.E. to cover India, the current smaller route has replaced the earlier one. The purpose of the pilgrimage is to give the pilgrim an experience of Self (Atman) and Brahmin (the Whole). 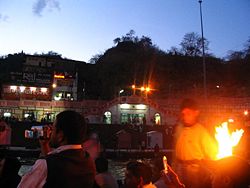 Haridwar, on the banks of river Ganga, serves as a gateway to the famed Char Dham (four abodes of the Lord) shrines situated in the Upper Himalayas, Badrinath, Kedarnath, Gangotri and Yamunotri.

The origins of the Char Dham remain obscure. The appellation Char Dham had been reserved for India's most famous pilgrimage circuit, four important temples—Puri, Rameshwaram, Dwarka, and Badrinath. They had been grouped together by the great eighth-century reformer and philosopher Shankaracharya (Adi Sankara) as the archetypal All-India pilgrimage circuit to the four cardinal points of the subcontinent.

Badrinath, the last visited and the most important of the four sites in the original Char Dham, also became the cornerstone site of a Himalayan pilgrimage circuit dubbed the Chota (little) Char Dham. Unlike the original Char Dham, the sites of the Chota Char Dham have their own, separate sectarian affiliation. The three major sectarian movements in modern devotional Hinduism have representation, with the Vaishnava site Badrinath joined by one Shaiva site (Kedarnath) and two Devi sites (Yamunotri and Gangotri).

As late as the mid-twentieth century, devotees consistently still used the "Chota" designation to designate the Himalayan version of the Char Dham. That usage reflects the importance of the circuit for most of its history. Accessible until recent times only after a two-month trek, the Chota Char Dham had been long dominated by wandering ascetics and religious masters, along with a handful of devoted retirees and wealthy patrons (who could afford an entourage).

While the individual sites and the circuit as a whole hold importance to Hindus on the plains below, they held less significance for year round religious devotion and practice. After the 1962 war between India and China, accessibility to the Chota Char Dham improved drastically. India efforts conducting the war required investment to develop Himalayan infrastructure. As pilgrim buses began to arrive, the Chota appendix seems to have dropped away, though the prefix "Himalayan" (Hindi: Himalaya ki Char Dham) often has been added to avoid confusion. 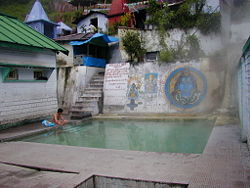 Gangotri: Wonderfully hot waters for men (women's bath inside) with Parashar temple above.

With infrastructure improvements, the importance of the Char Dham as both an religious destination and an object of the national Hindu religious imagination has increased significantly. Buoyed by the development of new forms of "religious tourism," and by the rise of a conservative Hindu population compelled by sites that speak to the existence of an all-India Hindu culture, the Char Dham has become an important destination for pilgrims from throughout South Asia and the diaspora, particularly Bengalis, Marwaris, Gujaratis, Delhites and people from U.P, and of course citizens of Uttarakhand.

Currently, the Char Dham sees upwards of 250,000 visitors in an average pilgrimage season, which lasts from approximately April 15 until Diwali (sometime in November). The pilgrimage season has the heaviest traffic in the two-month period before the monsoon. Once the rains come (sometime in late July), travel becomes extremely dangerous: extensive road building has critically destabilized the rocks, and fatal landslides and bus/jeep accidents occur regularly every year, with mortality rates for a season often surpassing 200.

Despite the danger, pilgrims continue to visit the Char Dham in the monsoon period, as well as after the rains end. Although temperatures at the shrines in the early winter months (October and November) prove inhospitable, the incredible mountain scenery that surrounds the sites has the most vividness after the rains have moistened the dust of the plains below.

Men's baths. Bathing in the waters of the Yamuna at her source (Yamunotri) guarantees a painless death.

Most pilgrims to the Char Dham embark from the famous temple town of Haridwar. Others leave from Haridwar's sister city, Rishikesh, or from Dehra Duhn, the capital of Uttarakhand. From there, pilgrims traditionally visit the sites in the following order:

Yamunotri, the source of the Yamuna River and the seat of the goddess Yamuna, lay a full day's journey from Rishikesh, Haridwar or Dehradun. The temple requires walking six kilometers from the town of Hanuman Chatti. Pilgrims may hire horses or palanquins. The current temple had been rebuilt recently, as past structures have been destroyed by the weather and elements. A few small ashrams and guest houses at the temple provide lodging. The Uniyal family of pujaris (priests) perform ritual duties such as the making and distribution of prasad (sanctified offerings) and the supervision of pujas (ritual veneration). The cooking of rice and making of prasad marks one of the unique aspects of ritual practice at the site include hot springs.

Gangotri, the source of the Ganga (Ganges) River and seat of the goddess Ganga, lies one day's travel from Rishikesh, Haridwar or Dehra Duhn, or in two days from Yamunotri. More popular and important than its sister site to the east, Gangotri may be accessed directly by car and bus, allowing many more pilgrims to make the trip easily. A small village of guest houses and restaurants serves the pilgrim community. The Semwal family of pujaris supervise Ritual duties. The aarti ceremony at the Gangotri especially impresses visitors, as does the temple, a stately affair that sits on the banks of the rushing Ganga (Ganges River). Adventurous pilgrims can make an overnight 17 km trek to Gaumukh, the actual source of the Ganga.

Kedarnath, where devotees venerate a form of the Hindu god Shiva as one of the twelve jyotirling (linga of light), requires a two-day journey from either Gangotri or one of the main disembarkation points on the plains. Besides its affiliation with Siva, legend points to Kedarnath as the site of Shankaracharya's samadhi (place of internment). The temple, an impressive stone edifice of unknown date, requires a steep 13 km walk (horses or palanquins may be rented). The most remote of the four Char Dham sites, breathtaking snow-capped peaks flank Kedarnath. No specific family of pujaris supervises rituals at Kedarnath, which focuses around veneration of the stone lingam that rests in the inner sanctum of the temple.

Badrinath, the seat of the Hindu god Vishnu in his aspect of Badrinarayan, generally requires a two-day's journey from either Kedarnath or one of the main disembarkation points on the plains. By far the most important of the four Char Dham sites, Badrinath receives many more visitors than the other three sites. As the route to Badrinath doubles for much of the way as the route to Hemkund Sahib, an important Sikh pilgrimage site, the road to Badrinath especially attacks crowds. The temple and its substantial surrounding village may be reached by road. The actual temple, a striking building with bright colors, evokes the painted Buddhist ghompas of the region; rumor has it that Buddhists originally controlled the temple.

Retrieved from https://www.newworldencyclopedia.org/p/index.php?title=Char_Dham&oldid=1030426
Categories:
Hidden category:
This page was last edited on 9 January 2020, at 20:29.
Content is available under Creative Commons Attribution/Share-Alike License; additional terms may apply. See Terms of Use for details.