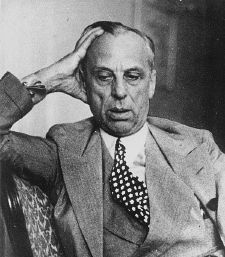 Alfred Pritchard Sloan, Jr. (May 23, 1875 – February 17, 1966) was a long-time president and chairman of General Motors. [1] He guarded information about his private life and instead focused most of his attention on his corporate interests. Sloan is one of the most recognized and lauded businessmen of the twentieth century. He is known for his managerial principles, which were very complex. He was a staunch supporter of the free market economy and is credited with aiding in the rise of consumer capitalism based on the operations of private corporations. His life's work helped to usher in a higher standard of living in the United States by adding to the nation's wealth and providing individual Americans with a wider array of buying options.

Sloan was born in New Haven, Connecticut to parents originally from upstate New York. He was the oldest of five children. His mother's father had been a Methodist Episcopal pastor. His father, Alfred Sloan, Sr., was a merchant whose business had become so profitable by 1885 that he moved the family to New York City.[2] Little is known about Sloan's childhood, except that he attended Brooklyn Polytechnic Institute.[3] He studied electrical engineering and graduated from the Massachusetts Institute of Technology in 1892.[4] While attending MIT he joined the Delta Upsilon Fraternity. The General Motors Building in Detroit, Michigan was built as the headquarters of the General Motors Company during the period when the company, under the leadership of Alfred P. Sloan, Jr., became the leading automobile manufacturer in the United States.

He became president of a Hyatt Roller Bearing a company that made roller and ball bearings in 1899.[5] In 1916 his company merged with United Motors Corporation which eventually became part of General Motors Corporation.[6] He became Vice-President, then President (1923),[7] and finally Chairman of the Board (1937) of GM. In 1934, he established the philanthropic, nonprofit Alfred P. Sloan Foundation. GM under Sloan became famous for managing diverse operations with financial statistics such as return on investment; these measures were introduced to GM by Donaldson Brown, a protege of GM vice-president John J. Raskob who was in turn the protege of Pierre du Pont—the DuPont corporation owned 43 percent of GM.

Sloan is credited with establishing annual styling changes, from which came the concept of planned obsolescence. He also established a pricing structure in which (from lowest to highest priced) Chevrolet, Pontiac, Oldsmobile, Buick and Cadillac did not compete with each other, and buyers could be kept in the GM "family" as their buying power and preferences changed as they aged. These concepts, along with Ford's resistance to the change in the 1920s, propelled GM to industry sales leadership by the early 1930s, a position it retained for over 70 years. Under Sloan's direction, GM became the largest and most successful and profitable industrial enterprise the world had ever known.

During Alfred P. Sloan's leadership of GM, many public transport systems of trams in the US were replaced by buses. There are some who believe that this conversion was orchestrated by General Motors, Firestone Tire Corp., Standard Oil of California, and the Mack Truck Co. in order to increase automobile sales; see General Motors streetcar conspiracy for details.

In the 1930s GM—long hostile to unionization—confronted its workforce, newly organized and ready for labor rights, in an extended contest for control. Sloan was averse to violence of the sort associated with Henry Ford. He preferred the subtle use of spying and had built up the best undercover apparatus the business community had ever seen up to that time. When the workers organized a massive sitdown strike in 1936, Sloan found that espionage had little value in the face of such open tactics.

Under Sloan's direction as CEO, General Motors is known to have made large profits off of the rearmament of the Third Reich. General Motors Overseas Corporation was led by director James Mooney, who held various business visits with Adolph Hitler, along with senior executives of GM's German division Adam Opel A.G. Both GM and Opel A.G. were eager, willing and indispensable cogs in the Third Reich's rearmament juggernaut, a rearmament that, as many feared during the 1930s would enable Hitler to conquer Europe and destroy millions of lives. For GM's part, it has steadfastly denied for decades, even in the halls of th U.S. Congress, that it actively assisted the Nazi war effort.[8]

The world's first university-based executive education program—the Sloan Fellows—was created in 1931 at Massachusetts Institute of Technology (MIT) under the sponsorship of Sloan.[9] A Sloan Foundation grant established the MIT School of Industrial Management in 1952 with the charge of educating the "ideal manager," and the school was renamed in Sloan's honor as the Alfred P. Sloan School of Management, one of the world's premier business schools. A second grant established a Sloan Fellows Program at Stanford Graduate School of Business in 1957. The program became the Stanford Sloan Master's Program in 1976, awarding the degree of Master of Science in Management. Sloan's name is also remembered in the Sloan-Kettering Institute and Cancer Centre in New York. In 1951, Sloan received The Hundred Year Association of New York's Gold Medal Award "in recognition of outstanding contributions to the City of New York."

Sloan maintained an office in 30 Rockefeller Plaza in Rockefeller Center, now known as the GE Building.[10] He retired as GM chairman on April 2, 1956 and died in 1966.

Recently, Sloan's work at GM has come under fire for causing a complicated accounting system to be placed upon American manufacturers that prevents the implementation of lean manufacturing methods thus leading to companies which cannot compete effectively with non-Sloan companies such as Toyota. In a nutshell, the thrust of the criticism is that by using Sloan's methods a company will value inventory just the same as cash and thus there is no penalty for building up inventory. However, carrying excessive inventory in the long run is detrimental to a company's operation and induces many hidden costs.[11]

Another factor in the criticism is that Sloan considered people on the shop floor to be totally expendable as a variable cost item to manufacturing. This view is the opposite of how Toyota views employees. Toyota looks to shop floor employees as their main source of cost savings and productivity improvements.[12]

Sloan was also instrumental in the demise of public city transport throughout the United States. He formed a company called National City Lines which quietly bought up public city transport companies and intentionally allowed these "daughters" to go bankrupt, by changing schedules, doubling or tripling fares and neglecting maintenance. In this way he ensured that city dwellers had to buy cars.

"The business of business is business."

"I am sure we all realize that this struggle that is going on though the World is really nothing more or less than a conflict between two opposing technocracies manifesting itself to the capitalization of economic resources and products and all that sort of thing." - May 1941

"It seems clear that the Allies are outclassed on mechanical equipment, and it is foolish to talk about modernizing their Armies in times like these, they ought to have thought of that five years ago. There is no excuse for them not thinking of that except for the unintelligent, in fact, stupid, narrow-minded and selfish leadership which the democracies of the world are cursed with… But when some other system develops stronger leadership, works hard and long, and intelligently and aggressively - which are good traits - and, superimposed upon that, develops the instinct of a racketeer, there is nothing for the democracies to do but fold up. And that is about what it looks as if they are going to do." - June 1940

Alfred P. Sloan is most well known for his role in shaping the destiny of the General Motors Corporation. His managerial skills were highly efficient and thus have been studies by many successors. He was a staunch businessman who spent most of his life dedicated to his work. Little is known about his private endeavors because of his attention to detail in business affairs. His practices helped to shape the course of American enterprise long after his death, especially in the automotive industry. Sloan is truly one of the most noteworthy figures of American business. His practices helped to boost the nation's wealth and open up new choices for customers of various socioeconomic strata. In effect, his principles helped to give rise to the corporate world as we now know it.

Retrieved from https://www.newworldencyclopedia.org/p/index.php?title=Alfred_P._Sloan,_Jr.&oldid=1052716
Categories:
Hidden category:
This page was last edited on 16 May 2021, at 13:17.
Content is available under Creative Commons Attribution/Share-Alike License; additional terms may apply. See Terms of Use for details.