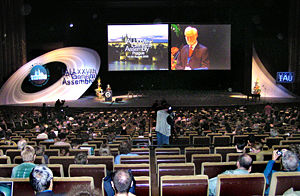 Astronomical Institute, Academy of Sciences of the Czech Republic

An academic conference is a conference for researchers (not always academics) to present and discuss their work. Along with academic or scientific journals, conferences provide an important channel for the exchange of information among experts.

Presentations are generally followed by discussions, in which participants exchange reactions and critiques. This exchange of ideas distinguishes the conference from other non-interactive forms of scholarly communication. Academic conferences are also places where scholars and professionals develop friendships and professional relationships. Today, developments in technology have begun to allow for Internet-based conferences.

Generally, a work is presented in the form of a short, concise presentation lasting about 10 to 30 minutes, which is usually followed by a discussion. The works may be collected, revised and published as the conference proceedings. Often conferences feature one or more keynote speakers (usually scholars of some standing), whose presentation can last from 15 minutes to an hour. Panel discussions, roundtable discussions on various issues, or workshops may be a part of the conference; in particular, conferences related to the performing arts feature workshops.

Prospective presenters are usually asked to submit a short abstract, which will be reviewed before the presentation is accepted for the meeting. Some disciplines require presenters to submit a paper of about 12-15 pages, which is peer reviewed by members of the program committee or referees chosen by them. 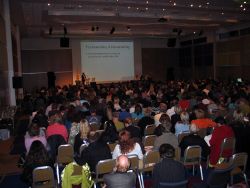 In some disciplines, such as English and other languages, it is common for presenters to read from a prepared text. In other disciplines such as the sciences, presenters may use visual presentations to display figures and diagrams.

A large meeting will usually be called a conference, while a smaller meeting is termed a workshop. They might be single track or multiple track, where the former has only one session at a time, while a multiple track meeting has several parallel sessions with speakers in separate rooms speaking at the same time.

Depending on the theme of the conference, social or entertainment activities may also be offered. In a large enough conference, academic publishing houses may set up displays offering books at a discount. At larger conferences, business meetings for learned societies or interest groups might also take place.

Conferences are usually organized either by an academic society or by a group of researchers with a common interest. Larger meetings may be handled on behalf of the academic society by a Professional Conference Organizer (PCO). An academic conference can be also called Convention or Congress.

The collection of papers is organized by one or more persons, who form the editorial team. The quality of the papers is typically ensured by having external people read the papers before they are accepted in the proceedings. This process is called reviewing. Depending on the level of the conference, this process can take up to a year. The editors decide the composition of the proceedings, the order of the papers, and produce the preface and possibly other pieces of text. Although most changes in papers occur on the basis of a consensus between editors and authors, editors also may have the authority to make changes.

Since the collection of papers comes from individual researchers, the character of a proceedings is distinctly different from a textbook. Each paper typically is quite isolated from the other papers in the proceedings. Oftentimes there is no general argument leading from one contribution to the next. In some cases, the set of contributions may be consistent in quality and style and so the editors of the proceedings may decide to further develop the proceedings into a textbook (this may even be a goal at the outset of the conference).

A number of academic journals also use this name in their title, for example, Proceedings of SPIE, although, in the area of science, the quality of publications in proceedings usually is not so high as that of international scientific journals.

Abstract management is the process of accepting and preparing abstracts for presentation at an academic conference. The process consists of either invited or proffered submissions of the abstract or summary of work. The abstract typically states the hypothesis, tools used in research or investigation, data collected, and a summary or interpretation of the data.

The abstracts usually undergo peer review after which they are accepted or rejected by the conference chair or committee and then allocated to conference sessions. The abstracts may be presented as an oral talk or as an illustrated poster during the event. Abstracts are often published before or after the event as conference proceedings or in academic journals or online. In some cases submission of a full paper may be required before final acceptance is given. In some fields (for example, computer science), most mainstream conferences and workshops ask for the submission of full papers (rather than just abstracts) and academic program committees peer review the full paper to a standard comparable to journal publication before accepting a paper for presentation at the conference and publishing it in an edited proceedings series.

In academia, a colloquium typically consists of a single lecture given by a member of the academic community about his or her work to colleagues who work in the same or an allied field. The audience is expected to ask questions and to evaluate the work presented. Colloquia provide scholars with the opportunity to face and respond to criticism in the early stages of the development of new ideas.

Symposium originally referred to a drinking party (the Greek verb sympotein means "to drink together") but has since come to refer to any academic conference, or a style of university class characterized by an openly discursive rather than lecture and question–answer format.

Web conferencing is used to conduct live meetings or presentations via the Internet. In a web conference, each participant sits at his or her own computer and is connected to other participants via the Internet. This can be either a downloaded application on each of the attendees computers or a web-based application where the attendees will simply enter a URL (website address) to enter the conference.

A webinar is a neologism to describe a specific type of web conference. It is typically one-way, from the speaker to the audience with limited audience interaction, such as in a webcast. A webinar can be collaborative and include polling and question and answer sessions to allow full participation between the audience and the presenter. In some cases, the presenter may speak over a standard telephone line, pointing out information being presented on screen and the audience can respond over their own telephones. There are web conferencing technologies on the market that have incorporated the use of VoIP (Voice over Internet Protocol) audio technology, to allow for a truly web-based communication. Webinars may (depending upon the provider) provide hidden or anonymous participant functionality, enabling participants to be unaware of other participants in the same meeting.

In the early years of the Internet, the terms "web conferencing" was often used to describe a group discussion in a message board and therefore not live. The term has evolved to refer specifically to live or "synchronous" meetings.