Abstraction is the process of generalization by reducing the information content of a concept or an observable phenomenon, typically in order to retain only information which is relevant for a particular purpose. For example, abstracting a black-and-white leather soccer ball to a ball retains only the information on general attributes and behavior of a ball. Similarly, abstracting “happiness” to an “emotional state” reduces the amount of information conveyed about the emotional state. Abstraction typically results in the reduction of a complex idea to a simpler concept or a general domain, which allows the understanding of a variety of specific scenarios in terms of certain basic ideas. Abstract things are sometimes defined as those things that do not exist in reality or exist only as sensory experience, but there is a difficulty in deciding which things "exist" in reality. It is difficult to reach agreement on whether concepts like God, the number three, and goodness are real, abstract, or both.

Abstraction in philosophy is the process of forming a concept by identifying common features among a group of individuals, or by ignoring unique aspects of these individuals. The notion of abstraction is important to understanding some philosophical controversies surrounding empiricism and the problem of universals. Metonymy, in linguistics, refers to the use of the same sorts of nouns that signify concrete objects to refer to abstract concepts, and is found in many languages, including English. In the psychology of Carl Jung, abstraction refers to the processing of a particular experience exclusively by one of the following four psychological functions: sensation, intuition, feeling, and thinking—which would normally function in relation to each other.

In philosophical terminology, abstraction is the thought process wherein ideas are distanced from objects.

Abstraction uses a strategy of simplification which ignores formerly concrete details or leaves them ambiguous, vague, or undefined. Effective communication about things in the abstract requires an intuitive or common experience between persons wishing to communicate. 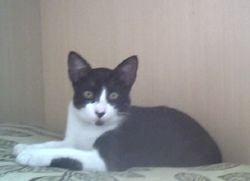 For example, many different things can be red. Likewise, many things sit on surfaces (as in Picture 1, to the right). The property of redness and the spatial relation of sitting-on are therefore abstractions of those objects. Compare the photo at the right with the conceptual diagram below. The conceptual diagram Graph 1 identifies only three boxes, two ellipses, and four arrows (and their nine labels), whereas the image picture 1 shows many more visual details, with scores of implicit relationships. Graph 1 details some explicit relationships between the objects of the diagram. For example the arrow between the agent and CAT:Elsie depicts an example of an is-a relationship, as does the arrow between the location and the MAT. The arrows between the gerund SITTING and the nouns agent and location express the diagram's basic relationship; "agent is SITTING on location"; the agent, Elsie, is an instance of CAT.

Conceptual diagram for A Cat sitting on the Mat (Graph 1)

Although the description sitting-on (Graph 1) is more abstract than the graphic image of a cat sitting on a mat (Picture 1), the delineation of abstract things from concrete things is somewhat ambiguous; this ambiguity or vagueness is characteristic of abstraction. Something as simple as a newspaper might be specified to six levels, as in Douglas R. Hofstadter's illustration of that ambiguity, with a progression from abstract to concrete in Gödel, Escher, Bach (1979):

(5) my copy of the May 18 edition of the Chronicle

(6) my copy of the May 18 edition of the Chronicle as it was when I first picked it up (as contrasted with my copy as it was a few days later: in my fireplace, burning)

An abstraction can be an encapsulation of any of these levels of detail and still be considered general. A detective, writer, philosopher, scientist, or engineer might seek to learn about the specifics of some thing at progressively greater levels of detail in order to solve a crime or a problem.

Abstractions sometimes have ambiguous referents; for example, "happiness" (when used as an abstraction) can refer to as many things as there are people and events or states of being which make them happy. "Architecture" refers not only to the design of safe, functional buildings, but also to elements of creation and innovation which aim at elegant solutions to construction problems, to the use of space, and at its best, to the attempt to evoke an emotional response from the builders, owners, users, and even observers of the building.

Things that do not exist at any particular place and time are often considered abstract. Unique instances, or members of an abstract class or thing, might exist in many different places and times. That abstract thing is then said to be multiply instantiated. For example, the abstract concept “picture” is instantiated in Picture 1 above, and wherever else a specific picture is displayed.

It is not sufficient, however, simply to define abstract ideas as ideas that can be instantiated, and to define abstraction as the movement away from instantiation towards the idea. Doing so would make the concepts 'cat' and 'telephone' abstract ideas since despite their varying appearances, a particular cat or a particular telephone is an instance of the concept "cat" or the concept "telephone." Although the concepts "cat" and "telephone" are abstractions, they still belong to concrete material (physical) objects.

A physical object (a possible referent of a concept or word) is considered concrete (not abstract) if it is a particular individual that occupies a particular place and time.

Abstract things are sometimes defined as those things that do not exist in reality or exist only as sensory experience, like the color red. That definition, however, suffers from the difficulty of deciding which things exist in reality. It is difficult to reach agreement on whether concepts like God, the number three, and goodness are real, abstract, or both.

An approach to resolving such a difficulty is to use the grammatical terms “subject” and predicates. Statements about whether a thing is real, abstract, concrete, or possesses a particular property (such as good) then become propositions about predicates. The original object remains the subject, while the person conducting the investigation must evaluate each of the propositions to determine whether they are appropriate and correct. In Graph 1 above, the graphical relationships, such as the arrows joining boxes and ellipses could be said to denote predicates. A conceptual graph depicting different levels of abstraction would show multiple tiers of boxes or ellipses, with arrows pointing up or down to boxes on higher or lower tiers.

Abstraction in philosophy is the process of forming a concept by identifying common features among a group of individuals, or by ignoring spacio-temporal aspects of these individuals. The notion of abstraction is important to understanding some philosophical controversies surrounding empiricism and the problem of universals. It has also recently become popular in formal logic as predicate abstraction.

John Locke supported the existence of abstraction in Essay Concerning Human Understanding (paragraphs 6ff, 98, 119 and 125), identifying the capacity to abstract as the quality which distinguished humans from animals and made spoken language possible.

In The Principles of Human Knowledge, Berkeley argued that the concept of an abstract idea is incoherent because it requires both the inclusion and the exclusion of one and the same property. An abstract idea would have to be general and precise at the same time, general enough to include all instances of the concept, yet precise enough to exclude all non-instances. He used the example of the abstract idea of a triangle, which “is neither oblique nor rectangular, equilateral nor scalenon, but all and none of these at once.” [1]

The way that physical objects, like rocks and trees, have being differs from the way that properties of abstract concepts or relations have being, for example the way the concrete, particular, individual cat and mat depicted in Picture 1 exist differs from the way in which the concepts illustrated in Graph 1 exist. In ontology, the word "abstract" applies to properties and relations that, by themselves, may not exist in space or time, but do potentially exist as individual instances in many different places and times.

Reification, (also called hypostatization), refers to the treatment of an abstract concept, such as "society" or "technology" as if it were a concrete object, might be considered a logical fallacy. In linguistics this is called metonymy, in which abstract concepts are referred to using the same sorts of nouns that signify concrete objects. Metonymy is found in many languages, including English, and can blur the distinction between abstract and concrete things. An example is this quote, given in 1805 by Horatio Nelson at the Battle of Trafalgar: "England expects that every man will do his duty."

Words denoting abstract concepts are very important for the writing of literature, philosophy and poetry. The ancient Japanese language contained very few abstract words; Japanese scholars adapted Chinese words for these concepts and proceeded to create a rich and varied body of literature.

An abstraction can be construed as a process of mapping multiple different pieces of constituent data to a single piece of abstract data based on similarities in the constituent data, for example many different physical cats map to the abstraction "CAT." This conceptual scheme emphasizes the inherent equality of both constituent and abstract data, thus avoiding problems arising from the distinction between "abstract" and "concrete." In this sense the process of abstraction entails the recognition of similarities among objects and the process of associating these objects with an abstraction (which is itself an object). Picture 1 above illustrates, among other concepts, the concrete relationship "Cat sits on Mat." Chains of abstractions can be constructed, moving from the neural impulses arising from sensory perception to basic abstractions such as color or shape, to experiential abstractions such as a specific cat, to semantic abstractions such as the "idea" of a CAT, and to classes of objects such as "mammals" and even categories such as "object" as opposed to "action." This conceptual scheme entails no specific hierarchical taxonomy, only a progressive relation of detail to a single abstract object.

Some research into the human brain suggests that the left and right hemispheres differ in their handling of abstraction. For example, one meta-analysis reviewing human brain lesions has shown a left hemisphere bias during the usage of tools to perform specific tasks. [2].

Abstraction is used in the arts synonymously with the phrase “abstract art.” It can, however, refer to any object or image which has been distilled from the real world, or indeed, another work of art. In the truest sense, abstract art is not really abstract.

Jung's definition of abstraction broadened its scope beyond the thinking process to include four mutually exclusive psychological functions: sensation, intuition, feeling, and thinking which, together, would normally form a structural totality of experience. According to Jung, abstraction operates in one of these opposing functions when the simultaneous influence of the three other functions is excluded, along with other irrelevancies such as emotion. Abstraction requires selective use of one of these abilities in the psyche; the opposite of abstraction is called "concretism." Abstraction is one of Jung's 57 definitions in Chapter XI of Psychological Types.