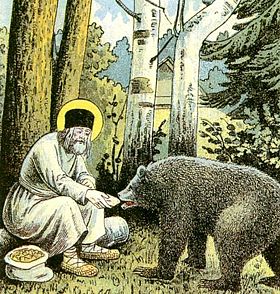 Saint Seraphim feeds a bear on his way to Sarov, 1903.

Saint Seraphim of Sarov (Russian: Серафим Саровский) (July 19, 1759 – January 2, 1833), born Prokhor Moshnin (Прохор Мошнин), is one of the most renowned Russian monks and mystics in the Eastern Orthodox Church. He is generally considered the greatest of the nineteenth century startsy, and arguably the first. He is remembered for extending the monastic teachings of contemplation and self-denial to the layperson, and taught that the purpose of the Christian life was to acquire the Holy Spirit. He led an exemplary life of asceticism and piety, thus allowing him to achieve a level of enlightenment during his lifetime.

Seraphim's parents, Isidore and Agathia Moshnin lived in Kursk, Russia. His father Isidore was a merchant, but Seraphim had little interest in business. Instead, he began a life that was very devout to the Orthodox Church at a young age. According to Orthodox legend, as a small boy he was healed by an icon of the Virgin Mary and was given the ability to see angels.

At the age of eighteen, he joined Sarov Monastery as a novice. In 1786 he officially took his monastic vows and was given the name Seraphim, which means "fiery" or "burning" in Hebrew. Shortly later he was ordained a hierodeacon. He was ordained again in 1793, this time as a hieromonk, and became the spiritual leader of the Diveyevo convent. Soon after in 1794 he retreated to a log cabin in the woods outside Sarov monastery and led a solitary lifestyle for twenty-five years. During this time his feet became swollen to the point that he had trouble walking.

One day, while chopping wood, he was attacked by a gang of thieves who beat him mercilessly until they thought he was dead. Seraphim never resisted and was beat with the handle of his own ax. The thieves were looking for money, but all they found in his hut was an icon of the Virgin Mary. The incident left Seraphim with a hunched back for the rest of his life. However, at the thieves' trial he pleaded to the judge for mercy on their behalf.

Soon after this incident, it is told that Seraphim spent a thousand successive nights on a rock in continuous prayer with his arms raised to the sky. In 1815, in obedience to a spiritual experience that he attributed to the Virgin Mary, he began admitting pilgrims to his hermitage as an Elder. Seraphim soon became extremely popular due to his apparent healing powers and clairvoyance. He was often visited by hundreds of pilgrims per day, and was reputed to have the ability to answer his guest's question before they could ask it.

As extraordinarily harsh as the Saint often was to himself, he was kind and gentle toward others—always greeting his guests with a prostration, a kiss, and exclaiming, "My Joy!" He died while kneeling before an icon of the Theotokos at the age of seventy-three.

Seraphim was canonized by the Russian Orthodox church in 1903, and is commemorated on August 1st and January 15th, which are the dates of his birth and death according to the Revised Julian Calendar. The date of his death is his feast day.

One of his disciples, Nicholas Motovilov, wrote most of what we know about him today.

Perhaps the Saint's most popular quote amidst Orthodox believers has become "Acquire a peaceful spirit, and around you thousands will be saved."

Wikiquote has a collection of quotations related to:
Seraphim of Sarov

Retrieved from https://www.newworldencyclopedia.org/p/index.php?title=Seraphim_of_Sarov&oldid=1026609
Categories:
Hidden category:
This page was last edited on 26 January 2023, at 09:54.
Content is available under Creative Commons Attribution/Share-Alike License; additional terms may apply. See Terms of Use for details.