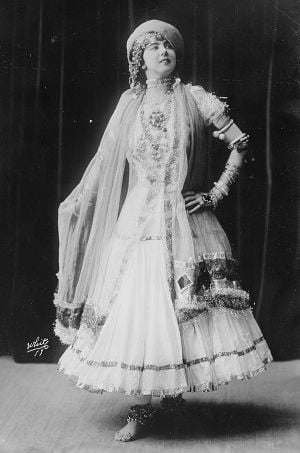 She and her husband, Ted Shawn, founded the influential dance school and company, Denishawn, in 1915. One of her most famous pupils was Martha Graham. Doris Humphrey and Charles Weidman also studied at Denishawn. Graham, Humphrey, Weidman, and the future silent film star Louise Brooks all performed as dancers with the Denishawn company.

St. Denis founded Adelphi University's dance program in New York State in 1938, which is credited as one of the first dance departments in an American university. It has since become a cornerstone of Adelphi's Department of Performing Arts.

Ruth St. Denis was the first American dancer to incorporate the traditions and practices of the vaudeville stage into the world of serious concert dance. Her solo "translations" were unique combinations of dramatic mise en scene and contemporary dance steps that successfully combined theatrical and concert dance traditions. Eastern religion also heavily influenced her choreographic style.

For many years, Denis taught dance at a studio in Hollywood, California, just north of the Hollywood Bowl. In 1963, she teamed with Raymond DeArmond Bowman to bring the first full-length Balinese Shadow Puppet play to the United States. Her later years were largely devoted to exploring the relationship between spirituality and dance.

Born Ruth Dennis on a farm in rural New Jersey, in 1879, Ruth St. Denis was the daughter of a strong-willed and highly educated woman. Her mother, Ruth Emma Dennis, was a physician by training. Ruth was encouraged to study dance from an early age. Her early training included Delsarte technique, ballet lessons with the Italian ballerina Maria Bonfante, and popular social dance forms. Ruth began her professional career in New York City, in 1892, where she worked in a dime museum and in vaudeville houses as a "skirt dancer," a female dancer whose legs were visible under her short skirt. St. Denis was reportedly required to perform her dance routine as many as eleven times a day.

In 1898, the young dancer was noticed by David Belasco, a well-known and highly successful Broadway producer and director. He hired her to perform with his large company as a featured dancer and was also responsible for giving her the stage name "St. Denis." She toured with Belasco’s company around the United States and in Europe, and was exposed to the work of several important European artists, including the Japanese dancer Sado Yacco and the great French actress, Sarah Bernhardt.

St. Denis’ became enthralled by the dance and drama of Eastern cultures, including those of Japan, India, and Egypt. She was greatly influenced by Bernhardt’s melodramatic acting style, in which the tragic fate of her characters took center stage. After 1900, St. Denis began formulating her own theory of dance/drama based on the techniques of her early training; her readings into philosophy; and the history of ancient cultures; and the work of artists like Yacco and Bernhardt.

In 1904, during one of her tours with Belasco, she saw a poster of the goddess Isis in an ad for Egyptian Deities cigarettes. The image of the goddess sparked her imagination and resulted in the creation of a solo dance, Radha, telling the story of a mortal maid who was loved by the Hindu god Krishna. St. Denis designed her own elaborate and exotic costume, and performed the dance with three extras from the then flourishing Coney Island Hindi community. 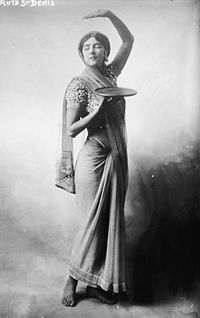 In Radha’s staging, St. Denis surrounded her Indian maiden with symbols of the five senses: Bells for hearing; flowers for smelling; wine for tasting; jewels for seeing; and kisses of the palm for touching. St. Denis danced barefoot, which was unheard of at the time and considered quite risqué. At the conclusion of one of these early performances, the audience sat in stunned silence for nearly twenty minutes before finally bursting into thunderous applause. Radha was the first of many creations by St. Denis, translating her understanding of Eastern culture and mythology to the dance stage.

Rhada catapulted St. Denis into international stardom. She and her mother went to Europe and traveled the continent performing her "dance translations," which by then included The Cobra, Incense, The Nautch, and The Yogi. She was declared a sensation and was particularly successful in Vienna, Austria, and in Germany, where a bronze nude of her is still part of the permanent collection of the Museum Ludwig in Köln.

In 1909, she returned to the U.S. and gave a series of well-received concerts in New York and other major cities. During the next five years she continued to tour, building her reputation as an exotic dancer with an artistic bent, in the still-emerging genre of modern dance which she helped to create and define.

While in New York, Ruth St. Denis first met Ted Shawn, a dancer, at the time, with a Los Angeles troupe. He had seen her perform in Denver and was convinced that they should work together. During this meeting, they discussed their artistic ideas and ambitions, and Shawn returned the next day to demonstrate his dancing. St. Denis' brother and manager hired him to be her partner. On April 13, 1914, St. Denis and Shawn began a tour of the southern United States. Although 12 years her senior, Shawn was completely enamored with St. Denis. Despite St. Denis’ initial objection to marriage, which she believed would hinder her artistic and personal autonomy, the two were wed in August of that year.

The next year, the couple founded the Denishawn Dance School and Company in Los Angeles. Among St. Denis’ students were future dance pioneers Martha Graham, Doris Humphreys, and Charles Weidman. St. Denis’ choreographic style broadened to include group numbers occasionally derived from Occidental as well as Oriental sources. Among her choreographic innovations was "music visualization," a style that called for movement equivalents to the timbres, dynamics, rhythm, and structural shapes of music.

Though their partnership was tumultuous (she did not believe in monogamy and he hid his homosexuality for years), it was highly productive, resulting in a successful touring company and, by 1915, one of the first major training grounds for art dance in the U.S. 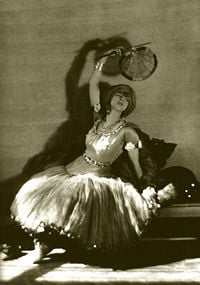 Denishawn aimed to demonstrate that dance could be a serious art while maintaining the interest of mass audiences through the use of costume, spectacle and entertainment. Its varied repertory incorporated spiritual exotica in solo, duet and group form, as well as large-scale presentations such as the Dance Pageant of India, Greece, and Egypt (1916). Premiering at this event was the couple’s signature duet, Tillers of the Soil, a stylized rendition of an ancient Egyptian couple harvesting the earth.

While the company enjoyed great success, St. Denis and Shawn struggled with each other on both artistic and personal levels. He reportedly felt that she undermined his contributions, while she felt that he stifled her freedom and individualism. The pair parted ways from 1918 to 1922, during which St. Denis and her own group, the Ruth St. Denis Concert Dancers, experimented with musical visualizations. Meanwhile, Shawn toured with an ensemble, receiving accolades for such works as the Native-American Xochitl (1921), which featured Graham. The pair reconnected briefly in the mid-1920s for a tour of Asia and India. St. Denis’ faux Indian works were surprisingly well-received by Indian audiences, who saw dance as a means to reassert a national identity distinct from colonial influence.

The mid-1920s also heralded the company’s transformation into a franchise, or in author Suzanne Shelton’s words, a "Denishawn Empire," which included not only the company but also schools throughout the country, a magazine, and a compound in the Bronx. By the late 1920s, however, key performers, including Graham, Humphrey, and Weidman, left Denishawn to establish their own careers. Denishawn attracted negative attention when it established a quota in order to reduce the number of Jewish students in its New York school, although such restrictions were in keeping with the xenophobia and nativist bias of the period.

As modern dance developed, St. Denis’ work in particular began to seem dated, overly aesthetic and excessively exotic. She in turn criticized new directions as being too minimal, propagandistic, negative, and sexless.

In 1930, she and Shawn separated again. Moreover, as a result of the Great Depression, the couple dissolved the Denishawn School and Company because the business could no longer sustain itself.

In 1931, St. Denis retired briefly from public performance, and founded the Society of Spiritual Arts. She devoted much of the rest of her life to promoting the use of dance in religion.

In 1938, St. Denis founded the dance program at Adelphi University in Garden City, New York. This was the first such program at an American university. In 1940, with La Meri (Russell M. Hughes), she founded the School of Natya to continue the teaching of Oriental dance. She also resumed performing in 1940, with an appearance at the Jacob’s Pillow Dance Festival founded in 1933, by Shawn. She continued to appear there nearly every year until 1964.

The Jacob's Pillow Archives contain photos, film, audiotapes, costumes, and music from St. Denis' later performances, and although St. Denis and Shawn destroyed many Denishawn sets and props when they dissolved the company, some remnants were transported to Jacob's Pillow and remain in the archives.

Later in life, St. Denis formed a church, St. Denis Religious Art Church, whose mission was the realization of the Divine through the Arts. In 1954, the Hindu mystic Swami Ramdas visited Los Angeles on his world tour, and was Ruth’s guest speaker. Although not as agile as she was before, she remained active into the 1960s. 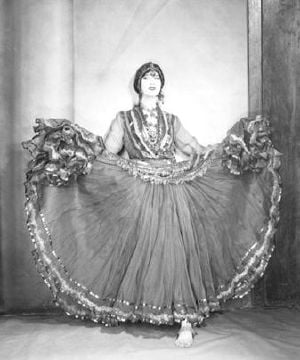 St. Denis was often called the "First Lady of American Dance" and the "Queen of American Dance." Although St. Denis has been compared to her contemporary, Isadora Duncan, these two artists were inherently different in their approach to the solo dance. According to St. Denis’ biographer Suzanne Shelton, Duncan sought "the Self in the Universe," and St. Denis sought "the Universe in the Self." For St. Denis, exotic worlds could be explored from the vantage point of one’s own body. In her dances, she embodied a vision of perfection inspired by the figures of divinity that she chose to portray—Radha, Mary, Kwan Yin, the Yogi, O-Mika, and others. By choosing figures from many different cultures, she presented a wordless show of a marriage between the spiritual and material worlds.

Many of her better-known solos were recorded on film. Today, many companies include a collection of her signature solos in their repertoires, including the program, The Art of the Solo, a showcase of famous solos of modern dance pioneers. Several early St. Denis solos (including Incense and The Legend of the Peacock) were presented on September 29, 2006, at the Baltimore Museum of Art. A centennial salute was scheduled with the revival premiere of St. Denis' Radha, commissioned by Countess Anastasia Thamakis of Greece. The program's director, Mino Nicolas, has been instrumental in the revival of these key solos.

Retrieved from https://www.newworldencyclopedia.org/p/index.php?title=Ruth_St._Denis&oldid=1076955
Categories:
Hidden category:
This page was last edited on 21 August 2022, at 23:52.
Content is available under Creative Commons Attribution/Share-Alike License; additional terms may apply. See Terms of Use for details.