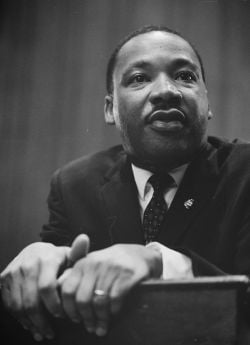 Rev. Dr. Martin Luther King addressing the press in 1964.
The Rev. Dr. Martin Luther King, Jr. (January 15, 1929–April 4, 1968) was America's foremost civil rights leader and is deemed by many as the greatest American leader of the twentieth century. His leadership was fundamental to ending legal segregation in the United States and empowering the African-American community. A moral leader foremost, he espoused nonviolent resistance as the means to bring about political change, emphasizing that spiritual principles guided by love can triumph over politics driven by hate and fear. He was a superb orator, best known for his "I Have a Dream" speech given at the March on Washington on August 28, 1963. King became the youngest person to win the Nobel Peace Prize in 1964.
Featured Article: Anxiety disorder 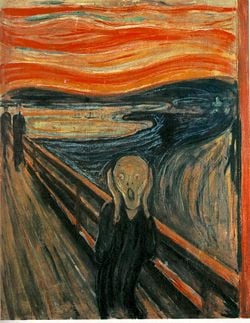 The Scream by Edvard Munch
Anxiety disorders are a cluster of mental disorders characterized by severe and uncontrollable feelings of anxiety that significantly impact a person's social, occupational, and personal functioning. Anxiety may cause physical and cognitive symptoms, such as restlessness, irritability, difficulty concentrating, increased heart rate, abdominal pain, and a variety of other symptoms that vary based on the individual. Anxiety disorders are common mental disorders. However, they are treatable and most people suffering from them are able to lead normal productive lives.
Popular Article: Mahavira A statue of Mahavira at Shri Mahaveerji temple in Rajasthan, India
Mahavira (599 – 527 B.C.E.) (meaning: "'Great Hero") is a central figure in the religion of Jainism, revered as the twenty-fourth and most recent Tirthankara ("Crosser of the stream of Samsara"). His philosophical teachings are said to have restored the religion of Jainism to greater purity that helped to promulgate its central tenets. Mahavira was likely a contemporary of Siddhartha Gautama (the Buddha), and he challenged the authority of early Vedic Hinduism's faith in the practice of animal sacrifices, thereby breaking away from tradition.
Did you know?

The Battle of Kursk, in which the Soviet Red Army defeated Hitler's German troops, was a turning point in World War II, giving the Soviets the strategic initiative on the Eastern Front (source: Battle of Kursk)

Home | Vision | Subject Areas | Feedback | Technology | Friends and Affiliates | Donate
Retrieved from https://www.newworldencyclopedia.org/p/index.php?title=Info:Main_Page&oldid=1093327
This page was last edited on 5 February 2023, at 02:19.
Content is available under Creative Commons Attribution/Share-Alike License; additional terms may apply. See Terms of Use for details.