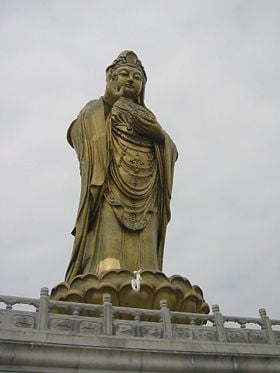 Guan Yin (Pinyin: Guān Yīn; traditional Chinese: 觀音) is known as the bodhisattva of infinite compassion in East Asian Buddhism. The name Guan Yin is short for Guan Shi Yin, which means "Observing the Sounds of the World," indicating her compassionate ability to listen for pleas of help so she can come to the aid of the needy. It is said that Guan Yin can take any form to help others. Thus, she can be represented in both a male or female body (although the female is more common).

Historically, worship of Guan Yin originated from earlier devotion to the male Indian bodhisattva Avalokiteśvara. When worship of Avalokiteśvara spread to China, he was also first worshiped in male form, but the representation changed over time. Since Avalokiteśvara is considered to be the personification of compassion and kindness, and these traits are associated with the Chinese concept of Yin (the feminine aspect of creation), the representation of Avalokiteśvara in China metamorphosed to an all female form around the twelfth century due to Daoist influence on Buddhism. The traditional date for Guan Yin's birthday is celebrated on the nineteenth day of the second lunar month.

In the modern period, Guan Yin is most often represented as a beautiful, white-robed woman, and her role has been expanded as a bringer of wealth and children, as these are requests often made by her devotees. She is also associated with vegetarianism, being an act of compassion toward animals, and Chinese vegetarian restaurants are generally decorated with her image. In Japan, Guan Yin is called "Kannon" or more formally "Kanzeon." In Korean, this incarnation of Buddha is called Gwan-eum or Gwanse-eum, and in Vietnamese, the name is Quan Âm. Furthermore, Guan Yin is revered by Daoists as an immortal sage.

In China, Guan Yin is usually shown in a white flowing robe, wearing necklaces of Indian/Chinese royalty. In her right hand is a water jar containing pure water, and in her left hand is a willow branch. With these, Guan Yin is thought to control the weather, heeding the pleas of the desperate and alleviating drought. Her crown usually depicts the image of Amitabha Buddha, who is said to have been Guan Yin's spiritual teacher. Many images of Guan Yin depict her with an extraordinary number of arms, hands, and eyes, representing her role as the observer and protector of the needy. She can also be recognized by the Buddha image adorning her crown.

She is occasionally flanked by her two acolytes, Long Nü and Shan Tsai, who are said to have appeared to her when meditating at Mount Putuo. Shan Tsai is often thought of as a "God of Wealth" in his own right being associated with Guan Yin's role of granting children and wealth. A story from the Yuan Dynasty indicates he rejected 53 human teachers and was content on being only Guan Yin's disciple. He is often found on Guan Yin's left in temple statues and paintings.

Originally worshipped in India as the male bodhisattva Avalokiteśvara, the personification of compassion and kindness was represented in China by masculine-appearing bodhisattva figures prior to the Song Dynasty (960 – 1279). Images that later displayed attributes of both genders are believed to be in accordance with the Lotus Sutra, where Avalokiteśvara has the supernatural power of assuming any form required to relieve suffering and also has the power to grant children. Because this bodhisattva is considered the personification of compassion and kindness, a mother-goddess and patron of mothers, the representations in China were further interpreted in an all-female form around the twelfth century. In the modern period, Guan Yin is most often represented as a beautiful, white-robed woman. Guan Yin's veneration was introduced to Japan by way of Korea by the mid-seventh century.

A strong impetus in the transformation of Guan Yin from man to woman in Chinese thought began with the writing of the Biography of the Goddess of Mercy, written during the Yuan Dynasty (1279 – 1368). This work, a pious rendering of the life of Guan Yin by a wealthy lay devotee, was written with the express purpose of defining Guan Yin as female. The prevailing ideology of the time suggested that certain tasks, such as granting children, were suitable only for women deities. Thus, Guan Yin was transformed to serve this purpose.

Folk traditions in China and other East Asian countries have added many distinctive legends to the life of Guan Yin. One of the most famous tales is the Chinese classic Journey to the West, which relates the adventures of the Monkey King, the Buddhist monk Xuanzang, and others to retrieve Buddhist scriptures from India. They are sent and subsequently aided by the bodhisattva Guan Yin, working toward the goal of the flourishing of Buddhism in China. 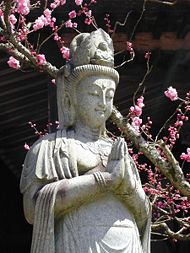 Another famous story describes Guan Yin as the daughter of a cruel father who wanted her to marry a wealthy but uncaring man. She is known as Miao Shan (妙善), and her father is identified as Prince Zhuang of Chu. Miao Shan was shown to be a Buddhist adept at a young age, chanting sutras when old enough to speak. She begged to be able to enter a temple and become a nun rather than enter into a marriage. Her father allowed her to work in the temple, but asked the monks to give her very hard chores in order to discourage her. The monks forced Miao Shan to work all day and all night, while others slept. However, it is said that she was such a good person that the animals living around the temple began to help her with her chores. Her father, seeing this, became so frustrated that he attempted to burn down the temple. Miao Shan put out the fire with her bare hands and suffered no burns. Eventually she was murdered and made into the goddess Guan Yin for all of her kindness, and began her journey to heaven. She was about to cross over into heaven when she heard a cry of suffering back on earth. She asked to be sent back and vowed to stay until all sufferings had ended.

The Legend of Miao Shan usually ends with Prince Zhuang, the father of Miao Shan, falling ill with jaundice. It is said that no physician could cure him. Then a monk appeared saying that the jaundice could be cured by making a medicine out of the arm and eye of one without malice. The monk further suggested that such a person could be found on Fragrant Mountain. Miao Shan, the goddess living on the mountain, offered up her eyes and arms willingly, and Prince Zhuang was cured of the illness. Thereafter, he went to the Fragrant Mountain to give thanks to the one who lovingly provided a cure for him. When he discovered that his own daughter gave up her arm and eyes for him, he begged for forgiveness. The story concludes with Miao Shan being transformed into the Thousand-Armed Guan Yin.

As well, upon learning of the source of his cure, Prince Zhuang requested his artisans to make a statue with "intact eyes and intact hands" to honor his daughter. However, the artisans misheard the request as "one thousand eyes and one thousand hands" (a not unlikely mistake, in Mandarin Chinese) and thus the popular depiction of Guan Yin came to be.

Guan Yin and the Thousand Arms

One Buddhist legend presents Guan Yin as vowing to never rest until she had freed all sentient beings from samsara (the reincarnation cycle of rebirth-life-death and rebirth). Despite strenuous effort, she realized that still many unhappy beings were yet to be saved. After struggling to comprehend the needs of so many, it is said that her head split into eleven pieces. Amitabha Buddha, seeing her plight, gave her eleven heads with which to hear the cries of the suffering. Upon hearing these cries and comprehending them, Guan Yin attempted to reach out to all those who needed aid, but found that her two arms also shattered into pieces. Once more, Amitabha came to her aid and gave her a thousand arms with which to aid the many. Many Himalayan versions of this tale include eight arms with which Guan Yin skillfully upholds the Dharma, each holding its own particular implement, while more Chinese-specific ones give varying accounts of this number.

Guan Yin has become an icon in East Asian popular (that is, not entirely religious) literature. Though not the only goddess found in Chinese religious thought (she is one of many, including the Queen Mother of the West and Mazu, Goddess of the Sea), she is the most revered and popular goddess. She introduced into Chinese religion (and especially Buddhism, from which she emerged) a clear feminine principle, manifesting herself as a caring mother for all people—attributes that are her defining characteristic found in all literature featuring her, both historical and contemporary.

Guan Yin's importance is also evident in the proliferation of her image in temples throughout Asia, especially in Buddhist temples but also, occasionally, in Daoist temples. Depictions of Guan Yin can become focal points for devotion: for example, the Monastery of Deep Compassion in Tianjin is renowned for its multi-armed Guan Yin whose eyes appear to follow the onlooker, and many other Guan Yin statues are venerated throughout Asia.

Retrieved from https://www.newworldencyclopedia.org/p/index.php?title=Guan_Yin&oldid=1061008
Categories:
Hidden category:
This page was last edited on 2 December 2021, at 22:16.
Content is available under Creative Commons Attribution/Share-Alike License; additional terms may apply. See Terms of Use for details.