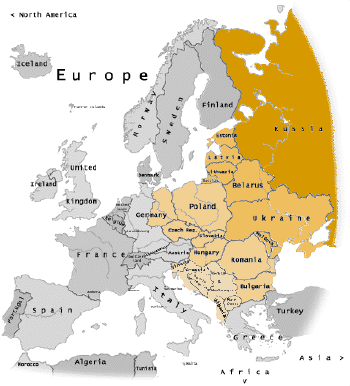 Eastern Europe, as defined by the United Nations Statistics Division (UNSD), includes the countries of Bulgaria, Czech Republic, Hungary, Poland, Romania, Russian Federation, and Slovakia, as well as the republics of Belarus, Moldova, and Ukraine.

In some sources, Eastern Europe is defined as the nations bordered by the Baltic and Barents seas on the north; the Adriatic, Black, and Caspian seas and the Caucasus Mountains on the south; and the Ural Mountains. Using this definition, the nations of Albania, Bosnia and Herzegovina, Croatia, Serbia and Montenegro (formerly Yugoslavia), which the UNSD categorizes as Southern Europe, would be included. This definition also includes the Baltic republics of Estonia, Latvia, and Lithuania, considered by the UN as Northern Europe. The Transcaucasian countries of Armenia, Azerbaijan, and Georgia are included in this definition, though they are defined by the UN as western Asia.

The term "Eastern Europe" is often used to refer to all European countries that were previously ruled by communist regimes (the Eastern Bloc), due to the concept of the “Iron Curtain” separating Western Europe and Soviet-controlled Eastern Europe throughout the period of the Cold War. Prior to German reunification, East Germany was often described as an Eastern European country.

The boundaries of Eastern Europe, therefore, are subject to considerable overlap and fluctuation depending on the context in which they are used, which makes differentiation difficult. Global regions are often of social constructs defined by abstract, neutral criteria and not necessarily strict physical features. 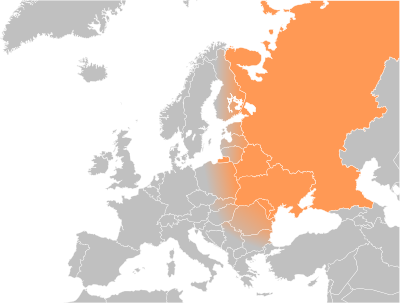 One of the definitions of Eastern Europe

Eastern Europe is a grouping of countries on the European continent which has varying definitions, sometimes geographical in nature and sometimes more political. The term is often used to designate the European countries under (former) communist regimes.

Their populations do not necessarily see themselves as Eastern Europeans, and many consider it a pejorative term. Most countries prefer to include themselves in other groups, associating themselves with Germany in Central Europe, with Scandinavia in Northern Europe or with Italy and Greece in Southern Europe.

As a term its origins are fairly recent. For many years Europe was divided on a North-South axis. With the southern Mediterranean states having much in common, and the northern Atlantic Ocean and Baltic Sea bordering states also having much in common. The term first arose in the eighteenth and nineteenth centuries to describe an area that was falling behind the rest of Europe economically. It was seen as a region where serfdom and autocratic governments persisted long after those notions were fading in the west. It was always a very vague notion, however, and many countries in the region did not fit the stereotypical view.

Much of Eastern Europe has ties to both the East and West. While all of the countries were heavily influenced by Roman Catholicism or Protestantism and have close historical and cultural ties to Germany, Italy, France or Scandinavia, many countries also had relations with the East. Russia was under the control of the Mongols for centuries and inherited political and social conventions from them. Further south, the influence of the Ottoman Empire and Islam was strong. The nations of the Balkans as well as Hungary and Romania were all at one time controlled by the Turks.

The approbative term "New Europe" has been coined by neoconservative Americans to describe those former Eastern-Bloc countries which disavow the antipathy towards the politics of the United States that is common in Western Europe. 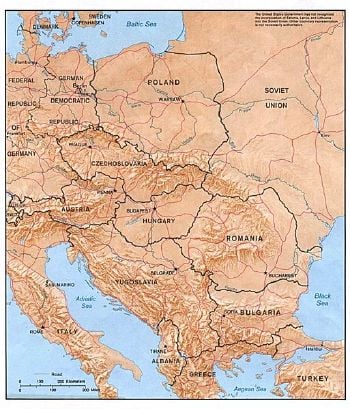 Eastern Europe prior to 1990

As a cultural and ethnic concept, the term Eastern Europe was defined by nineteenth-century German nationalists to be synonymous with "Slavic Europe," as opposed to Germanic (Western) Europe. This concept was re-enforced during the years leading up to World War II and was often used in a racist terminology to characterize Eastern/Slavic culture as being backward and inferior to Western/Germanic culture, language, and customs. Eastern Europe would then refer to the imaginary line which divided predominantly German lands from predominantly Slavic lands. The dividing line has thus changed over time as a result of the World Wars, as well as numerous expulsions and genocides.

The concept of Eastern Europe was greatly strengthened by the domination of the region by the Soviet Union after the Second World War and the takeover of the nations of the region by communist governments. The idea of the “Iron Curtain” separating Eastern and Western Europe was an extremely common view throughout the Cold War. This strict dualism caused problems, however, as it failed to account for the complexities of the region. For instance, Yugoslavia and Albania refused to be controlled by Moscow, but this division was often ignored by many in the West.

As the ideological division of the Cold War has now disappeared, the cultural division of Europe between Western Christianity, on the one hand, and Eastern Orthodox Christianity and Islam, on the other, has reemerged. It follows the so-called “Huntington line” of "clashing civilizations" corresponding roughly to the eastern boundary of Western Christianity in the year 1500. This line runs along what are now the eastern boundaries separating Norway, Finland, Estonia and Latvia from Russia, continues east of Lithuania, cuts in northwestern Ukraine, swings westward separating Transylvania from the rest of Romania, and then along the line now separating Slovenia, Croatia and northern Serbia from the rest of ex-Yugoslavia. In the Balkans this line coincides with the historic border between the Hungarian Kingdom (later Habsburg) and Ottoman empires, whereas in the north it marks the then eastern boundaries of Kingdom of Sweden and Teutonic Order, and the subsequent spread of Protestant Reformation. The peoples to the west and north of the Huntington line are Protestant or Catholic; they shared most of the common experiences of Western European history—feudalism, the Renaissance, the Reformation, the Enlightenment, the French Revolution, and the Industrial Revolution. 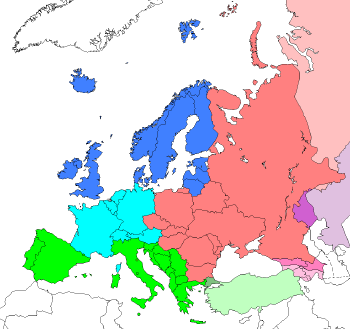 The varying definitions of Eastern Europe are detailed below.

Southeastern Europe and the Balkan Peninsula

Commonly the definition of Eastern Europe is expanded to include the following previously Communist/Socialist countries. The terms in parenthesis are the regions in which the nations are determined to exist by the United Nations Statistics Division.

Countries formerly recognized as part of this group:

Often considered as belonging to the region of Northern Europe: 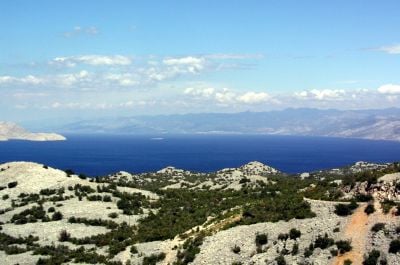 Eastern Europe is generally considered to be bordered by the Baltic and Barents seas on the north; the Adriatic, Black, and Caspian seas and the Caucasus Mountains on the south; and the Ural Mountains on the east.

The western area of the region is largely glaciated plains. The west central section is dominated by mountains and highlands associated with the Alpine system, with river valleys and structural basins between the highlands. A large, relatively flat, stable, geologic plateau covers the eastern section.

The northeastern area of the region is filled with lakes and glacial ridges. Major rivers in Eastern Europe are the Vistula, Danube, Volga, Dnepr, Don, Elbe, Rhône, and Ural.

Eastern Europe in the 1990s was deemed the most polluted region in the world. As many nations were freed from Soviet rule, they began to evaluate their ecological situations. In the 1990s, many of the countries in the region lacked effective pollution control systems, while some cities lacked wastewater treatment systems, allowing raw sewage to flow into the rivers. In some areas fruits and vegetables grown in the polluted soils were feared to be toxic to humans. Rivers in some of the countries no longer supported aquatic life.

Many considered pollution in their nations to be a larger problem that poverty, housing shortages, or poor medical services. The result has been that environmental rehabilitation has been made a priority throughout the region. 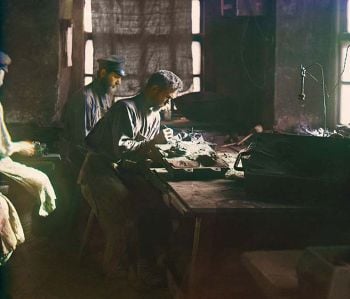 Manufacturing industries throughout Eastern Europe are an important factor in regional economics. The Czech Republic is the leading industrial nation in the western section, while Ukraine, the Ural Mountains, and the land along the Volga River are the major urban-industrial regions in the east. However, many of the former Soviet controlled nations are dealing with excessive pollution and significant environmental problems due to lax industrial controls during the Soviet era.

The region has excellent commercial forests and agricultural areas, though the growing season in the north is short. The Danube valley countries produce corn and wheat. Rye, potatoes, and livestock are important commodities. Ukraine, known for years as the "Breadbasket of the Soviet Union," is one of the most important wheat producers in Europe.

Poverty and unemployment rates are generally high throughout the region, leading many to work abroad. Many of the former Soviet bloc nations are still working to transition from a socialist to a capitalist economy.

Dominated throughout the twentieth century by the Soviet Union, politics in Eastern Europe has changed significantly since that nation's collapse in 1991. When Mikhail Gorbachev instituted a number of socialist reforms, included was glasnost, which allowed for a limited amount of freedom of expression. Soon to follow was an open criticism of the regime and cries for increased political and economic freedom. In 1989 government after government collapsed in Eastern Europe and political transformation began. The Belavezha Accords of December 1991 declared the Soviet Union officially dissolved and replaced by the Commonwealth of Independent States. This loose confederation attempted to assume some control and create stability during the period of transition.

Many of the newly independent republics aligned themselves with the capitalist democracies of Western Europe and individual republics assumed the central government's role.

It has been recommended that there are six core concepts that must be understood by citizens in a democratic society in order for them to function most effectively in their respective societies. These concepts include representative democracy, constitutionalism (rule of law), rights within the parameters of liberalism, citizenship, civil society based on a free and open social system, and the market economy of a free and open economic system.[2]

These concepts must be re-learned by those Eastern European nations which were under Soviet control or effected by a socialist system where freedom was absent. Collaborative efforts conducted with western democracies have assisted both Poland and the Czech Republic to establish successful programs for democratic citizenship education.

Retrieved from https://www.newworldencyclopedia.org/p/index.php?title=Eastern_Europe&oldid=1095993
Categories:
Hidden category:
This page was last edited on 16 January 2023, at 01:27.
Content is available under Creative Commons Attribution/Share-Alike License; additional terms may apply. See Terms of Use for details.