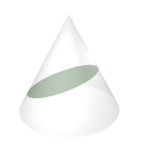 An ellipse (shaded green) was one of the conic sections studied and named by Apollonius.

Apollonius of Perga (Pergaeus) (ca. 262 B.C.E. – ca. 190 B.C.E.) was a Greek geometer and astronomer of the Alexandrian school, noted for his writings on conic sections. His innovative methodology and terminology, especially in the field of conics, influenced many later scholars, including Ptolemy, Francesco Maurolico, Isaac Newton, and René Descartes. 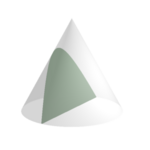 A parabola (shaded green) is another conic section described by Apollonius. 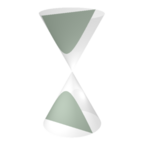 A hyperbola (shaded green) is a third conic section studied by Apollonius.

It was Apollonius who gave the ellipse, the parabola, and the hyperbola the names by which they are now known. The hypothesis of eccentric orbits, or deferent and epicycles, to explain the apparent motion of the planets and the varying speed of the Moon, are also attributed to him. Apollonius' theorem demonstrates that two models can be equivalent, given the right parameters. Ptolemy describes this theorem in the Almagest 12.1. Apollonius also researched the lunar theory, which he termed Epsilon (ε). The Apollonius crater on the Moon was named in his honor.

Apollonius was born circa 262 B.C.E., some 25 years after Archimedes. He flourished under the reigns of Ptolemy Euergetes and Ptolemy Philopator (247-205 B.C.E.). His treatise on conics earned him his name, "The Great Geometer," an achievement that assured his fame.

Of all his treatises, only Conics survives. Of the others, historians have titles and some indication of their contents thanks to later writers, especially Pappus. After the first edition of the eight-book Conics, Apollonius brought out a second edition at the suggestion of Eudemus of Pergamum. As he revised each of the first three books, Apollonius sent Eudemus a copy; the most considerable changes came in the first two books. Eudemus died before the completion of the rest of the revision, so Apollonius dedicated the last five books to King Attalus I (241-197 B.C.E.). Only four books have survived in Greek; three more are extant in Arabic; the eighth has never been discovered.

Although a fragment has been found of a thirteenth century Latin translation from the Arabic, it was not until 1661, that Giovanni Alfonso Borelli and Abraham Ecchellensis made a translation of Books 5-7 into Latin. Although they used Abu 'l-Fath of Ispahan's Arabic version of 983, which was preserved in a Florentine manuscript, most scholars now agree that the best Arabic renderings are those of Hilal ibn Abi Hilal for Books 1-4 and Thabit ibn Qurra for Books 5-7.

Apollonius was concerned with pure mathematics. When he was asked about the usefulness of some of his theorem in Book 4 of Conics he proudly asserted that "they are worthy of acceptance for the sake of the demonstrations themselves, in the same way as we accept many other things in mathematics for this and for no other reason." And since many of his results were not applicable to the science or engineering of his day, Apollonius further argued in the preface of the fifth book of Conics that "the subject is one of those which seems worthy of study for their own sake."[1]

Apollonius states that in Books 1-4, he works out the generation of the curves and their fundamental properties presented in Book 1 more fully than did earlier treatises, and that a number of theorems in Book 3 and the greater part of Book 4 are new. Allusions to predecessor's works, such as Euclid's four Books on Conics, show a debt not only to Euclid but also to Conon and Nicoteles.

Apollonius's genius reaches its greatest heights in Book 5. Here he treats mathematical normals (a normal is a straight line drawn perpendicular to a surface or to another straight line) as minimum and maximum straight lines drawn from given points to the curve (independently of tangent properties); discusses how many normals can be drawn from particular points; finds their feet by construction; and gives propositions that determine the center of curvature at any point and also leads to the Cartesian equation of the evolute of any conic section.

In Conics, Apollonius further developed a method that is so similar to analytic geometry that his work is sometimes regarded as anticipating the work of Descartes by some 1800 years. His application of reference lines (such as a diameter and a tangent) is essentially the same as our modern use of a coordinate frame. However, unlike modern analytic geometry, he did not take into account negative magnitudes. Also, he superimposed the coordinate system on each curve after the curve had been obtained. Thus, he derived equations from the curves, but he did not derive curves from equations.[2]

Pappus mentions other treatises of Apollonius. Each of these was divided into two books, and—with the Data, the Porisms, and Surface-Loci of Euclid, and the Conics of Apollonius—were, according to Pappus, included in the body of the ancient analysis.

De Rationis Sectione (Cutting of a Ratio) sought to resolve a certain problem: Given two straight lines and a point in each, draw through a third given point a straight line cutting the two fixed lines such that the parts intercepted between the given points in them and the points of intersection with this third line may have a given ratio.

De Spatii Sectione (Cutting of an Area) discussed a similar problem requiring the rectangle contained by the two intercepts to be equal to a given rectangle.

De Tactionibus (Tangencies) embraced the following general problem: Given three things (points, straight lines, or circles) in position, describe a circle passing through the given points and touching the given straight lines or circles. The most difficult and historically interesting case arises when the three given things are circles. In the sixteenth century, Vieta presented this problem (sometimes known as the Apollonian Problem) to Adrianus Romanus, who solved it with a hyperbola. Vieta thereupon proposed a simpler solution, eventually leading him to restore the whole of Apollonius's treatise in the small work Apollonius Gallus.

The object of De Inclinationibus (Inclinations) was to demonstrate how a straight line of a given length, tending towards a given point, could be inserted between two given (straight or circular) lines.

De Locis Planis (Plane Loci) is a collection of propositions relating to loci that are either straight lines or circles.

Known as "The Great Geometer," Apollonius' works greatly influenced the development of mathematics. His famous book, Conics, introduced the terms parabola, ellipse, and hyperbola. He conceived the hypothesis of eccentric orbits to explain the apparent motion of the planets and the varying speed of the Moon. A further contribution to the field of mathematics is Apollonius' theorem, which demonstrates that two models can be equivalent given the right parameters.

Retrieved from https://www.newworldencyclopedia.org/p/index.php?title=Apollonius_of_Perga&oldid=1059622
Categories:
Hidden category:
This page was last edited on 31 October 2021, at 12:01.
Content is available under Creative Commons Attribution/Share-Alike License; additional terms may apply. See Terms of Use for details.