Glucose (Glc) is a monosaccharide (or simple sugar) with the chemical formula C6H12O6. It is the major free sugar circulating in the blood of higher animals, and the preferred fuel of the brain and nervous system, as well as red blood cells (erythrocytes).

As a universal substrate (a molecule upon which an enzyme acts) for the production of cellular energy, glucose is of central importance in the metabolism of all life forms. It is one of the main products of photosynthesis, the process by which photoautotrophs such as plants and algae convert energy from sunlight into potential chemical energy to be used by the cell. Glucose is also a major starting point for cellular respiration, in which the chemical bonds of energy-rich molecules such as glucose are converted into energy usable for life processes.

Glucose stands out as a striking example of the complex interconnectedness of plants and animals: the plant captures solar energy into a glucose molecule, converts it to a more complex form(starch or cellulose) that is eaten by animals, which recover the original glucose units, deliver it to their cells, and eventually use that stored solar energy for their own metabolism. Milk cows, for example, graze on grass as a source of cellulose, which they break down to glucose using their four-chambered stomachs. Some of that glucose then goes into the milk we drink.

As glucose is vital for the human body and for the brain, it is important to maintain rather constant blood glucose levels. For those with diabetes mellitus, a disease where glucose levels in the blood get too high, personal responsibility (i.e. self management) is the key for treatment. For diabetes there is usually a complex treatment program involving a specific diet, exercise, medication, stress management, and other elements (UW Medicine 2006).

All major dietary carbohydrates contain glucose, either as their only building block, or in combination with another monosaccharide, as in sucrose (“table sugar”) and lactose, the primary sugar found in milk.

The natural form of glucose (D-glucose) is also referred to as dextrose, especially in the food industry.

The structure of glucose 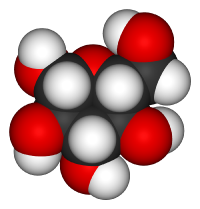 A space-filling model of glucose

The open-chain form of D-glucose.

Sugars are classified according to two properties: (1) number of carbon atoms and (2) type of functional group (either an aldehyde or a ketone group). Glucose, which has six carbon atoms (i.e., it is a hexose sugar) and contains an aldehyde group (-CHO), is thus referred to as an aldohexose.

The glucose molecule can exist in an open-chain (acyclic) form and a ring (cyclic) form. In solution and at neutral pH, the cyclic form is predominant at equilibrium. When glucose exists in cyclic form, the functional group is not free, making the molecule less reactive. This preference for the less reactive ring form offers a possible explanation for the crucial and widespread use of glucose in metabolism, as opposed to another monosaccharide such as fructose (Fru). The low tendency of glucose, in comparison to other hexose sugars, to non-specifically react with the amino groups of proteins might explain its importance to advanced life.

Glucose has four optic centers, which means that in theory glucose can have (4²-1) = 15 optical stereoisomers. Only seven of these are found in living organisms, and of these galactose (Gal) and mannose (Man) are the most important. These eight isomers (including glucose itself) are all diastereoisomers in relation to each other (i.e., they are not mirror images), and all belong to the D-series.

The functions of glucose

Because the cell membrane is permeable to glucose, the cell cannot accumulate pure glucose to any higher concentration than is present in the bloodstream. Cells, nonetheless, do accumulate glucose as an enzyme chemically modifies the glucose molecule by the addition of a phosphate group (phosphorylation). Since the cell membrane is impermeable to this modified form, called glucose-6-phosphate, the process effectively "traps" glucose inside the cell, allowing the recovery of more glucose from the bloodstream. Glucose-6-phosphate, in turn, can be used for three major functions, depending on the specific conditions within the cell and the overall needs of the organism:

Glucose is a major energy source

Glucose is a ubiquitous fuel in biology. When chemical energy is needed, glucose is oxidized to pyruvate through a process known as glycolysis, which is the energy source for certain organisms called obligate anaerobes that cannot utilize oxygen for metabolism. In aerobic organisms, however, the pyruvate typically continues onward to the reactions of the Citric acid cycle (TCAC) and the electron transport chain, forming CO2 and water. These later reactions generate about 18 times more energy than glycolysis, mostly in the form of ATP.

Glucose plays a role in the synthesis of non-carbohydrates

Glucose and its metabolites can also be mobilized when carbon skeletons are needed. That is, glucose also participates in the synthesis of complex molecules (anabolism) in addition to its role in the catabolic pathways that break down molecules into smaller components. For example, glucose-6-phosphate can enter the pentose phosphate pathway, which generates the five-carbon (pentose) sugar ribose for the synthesis of nucleotides, the building blocks of the nucleic acids DNA and RNA.

In plants and most animals (excepting guinea pigs and primates, such as humans), glucose is a precursor for the production of vitamin C (ascorbic acid). Polymers of glucose may also be bound to proteins (to form glycoproteins) or lipids (to form glycolipids). The addition of sugar chains may function to assist proteins in folding into their characteristic three-dimensional structure, to enhance the stability of proteins and membrane lipids, or to act as recognition sites for specific chemicals.

Glucose is a component of other carbohydrates

When the organism has an abundant supply of ATP and glucose, then it can synthesize one or more of the common glucose polymers (polysaccharides): glycogen for animals and starch and cellulose for plants. While glycogen and starch serve as energy-storage molecules, cellulose plays a primarily structural role in green plants.

The regulation of blood glucose

Given the importance of glucose as the preferred fuel of the brain, a constant blood glucose level (which typically falls between 4.4 mM and 6.7 mM in an adult male human) must be maintained for health and survival.

The concentration of blood glucose is mainly regulated through the action of hormones. Specifically, the hormone insulin directs the flow of glucose from the blood into liver, muscle, and adipose (fat storage) cells. It also promotes the increased synthesis of glycogen when energy needs have been met (for example, after a meal). When blood glucose levels fall (e.g., several hours after a meal), glucagon and epinephrine (also known as adrenaline) retrieve glucose from its storage form as glycogen in liver and muscle tissue. Low levels of insulin in this state also mean that the entry of glucose into muscle and adipose cells decreases, so that these cells switch to the use of non-carbohydrate fuels.

Low blood glucose levels (hypoglycemia) can result in impaired functioning of the central nervous system, which may manifest itself in dizziness, speech problems, or even loss of consciousness.

Hyperglycemia (elevated blood sugar), which is characteristic of diabetes mellitus, indicates an overproduction of glucose by the liver cells accompanied by an inability of other cells to utilize glucose. Patients with type 1 diabetes mellitus depend on external sources of insulin for their survival because (in most cases) their autoimmune system destroys the cells in the pancreas that secrete insulin. Patients with the more common type 2 diabetes mellitus may have relatively low insulin production or resistance to its effects.

Glucose is produced commercially through the breakdown of starch in an enzyme-catalyzed process called hydrolysis (a chemical reaction in which a molecule is split into two parts through the addition of water). The enzymatic process has two stages:

The resulting glucose solution is then purified by filtration and concentrated in a multiple-effect evaporator. Solid D-glucose is finally produced by repeated crystallizations.

Many crops can be used as sources of starch in the commercial production of glucose, including maize, rice, wheat, potato, cassava, arrowroot, and sago. In the United States, cornstarch (from maize) is used almost exclusively.