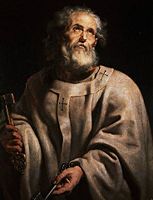 Saint Peter, by Peter Paul Rubens
The Apostle Peter, also known as Saint Peter, and Cephas—original name Simeon son of Jonah—was one of the Twelve Apostles of Jesus. His life is prominently featured in the New Testament Gospels and the Acts of the Apostles.

Peter was a Galilean fisherman assigned a leadership role by Jesus, who reportedly gave him the keys of heaven and called him the "rock" on whom the church would be built. Although later failing in his discipleship at several crucial moments during Jesus' lifetime, Peter went on to became an effective leader of the early church. Thousands were converted by his sermons, and many miracles were attributed to him. His relations with Saint Paul, however, were stormy, as the two leaders disagreed about fellowship between Jewish and Gentile Christans.

In Catholic tradition, Peter was the first pope. The ancient Christian churches all consider him a major saint and associate him with the foundation of the church in Rome, but differ about the authority the Roman patriarch in present-day Christianity. A large body of literature was attributed to Peter after his death, including two letters included in the New Testament.
Retrieved from https://www.newworldencyclopedia.org/p/index.php?title=Template:Featured_article_week_34&oldid=944323
Content is available under Creative Commons Attribution/Share-Alike License; additional terms may apply. See Terms of Use for details.