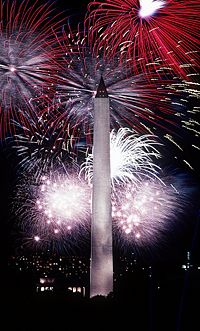 Fireworks at the Washington Monument

Gunpowder is used primarily as the propellant material in firearms. Despite the revulsion against them that some people have, guns are ethically neutral in that they can be used for both good and evil purposes, and the gunpowder that makes them work is also ethically neutral.

The use of gunpowder for fireworks is something just about everyone can appreciate. Indeed, one of the first things the Reverend Sun Myung Moon did in the early 1970s after moving into the Belvedere Estate in Tarrytown, New York, was to sponsor a public fireworks display for local residents on the grounds of the estate on July 4, and Unificationists who worked on the Bicentennial God Bless America Campaign remember the stunning display of fireworks that accompanied Reverend Moon's Washington Monument speech on September 18, 1976.

Nevertheless, it is a sad fact that the primary use of gunpowder historically has been for war. Even this, however, is not necessarily a bad thing. The Divine Principle teaches:

If there were no wars or divisions in this fallen world, then the sovereignty of evil would continue forever and the world would never be restored. Therefore, God has worked His providence to restore the heavenly sovereignty by degrees. He sends prophets and saints to the fallen world to found religions and raise the level of morality. He establishes governments with higher standards of goodness which come to oppose and destroy regimes with lower standards of goodness. To fulfill the providence of restoration, therefore, conflicts and wars are unavoidable. [1] Retrieved January 28, 2008.

Gunpowder is used in shooting sports and marksmanship, such as shotgun and rifle target shooting and competitions, although today smokeless powder is almost invariably used. There are international competitions in shooting; the shooting events of the Olympic Games are just one example. But some shooting competitions and hunting seasons are limited to the use of black powder and/or muzzleloading guns. Gunpowder also has a significant use in hunting, which Reverend Moon and his family enjoy and see as a normal and healthy activity.
Unification Aspects is designed to relate the subject of this article to Unification Thought and to aid
teachers and researchers who wish to further pursue these topics from a unification perspective.
Retrieved from https://www.newworldencyclopedia.org/p/index.php?title=Talk:Black_powder&oldid=661666
Content is available under Creative Commons Attribution/Share-Alike License; additional terms may apply. See Terms of Use for details.