Mount Rainier is a stratovolcano in Washington state, located 54 miles (87 km) southeast of the city of Seattle. In Pierce County, it is contained in the Cascade Volcanic Belt and is the highest peak in the Cascade Range. On clear days, it can be seen from as far away as Portland, Oregon, and Victoria, British Columbia.

Mount Rainier ranks fifth in height of all mountains in the contiguous U.S., slightly lower than California's Mount Whitney (14,494 feet) and three Sawatch Range peaks in Colorado. It ranks second to Mount Shasta in total volume for a single peak, and second to Mount Baker in volume of glacial ice. However, there is no other peak that has the combination of high elevation, massive bulk, and extensive glaciation. Only forty miles separates Puget Sound from this glacier-clad summit.

No other peak nearby even remotely challenges its supremacy. Though located in a state with two mountain ranges, (the Cascades and the Olympic Range), Mount Rainier is known by locals simply and affectionately as, "The Mountain." 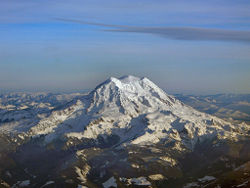 The three summits of Mt. Rainier

High on the eastern flank of Mount Rainier is a peak known as Little Tahoma, a volcanic remnant of an earlier configuration of Mount Rainier. At 11,138 ft (3,395 m), it has a prominence of 858 ft (262 m), and is almost never climbed in direct conjunction with Columbia Crest, so it is usually considered a separate mountain.

The Carbon River, Puyallup River, Nisqually River, and Cowlitz River all begin at the glaciers of Mount Rainier. The sources of the White River in Washington State are Winthrop, Emmons, and Fryingpan Glaciers. The White and Carbon Rivers join the Puyallup River, which discharges into Commencement Bay at Tacoma, Washington. The Nisqually empties into Puget Sound east of Lacey, Washington, and the Cowlitz joins the Columbia River between the towns of Kelso and Longview, Washington. 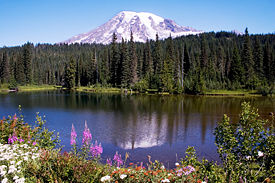 In general a difference of 1000 feet in altitude brings about changes in plant and animal life that are quite similar to the changes caused by a difference of 300 miles in latitude. There are four life zones found on Mount Rainier; the Humid Transition, the Canadian, the Hudsonian and the Arctic-alpine. [2]

A Pacific maritime climate characterized by rainy, mild winters and cool, dry summers controls northwest weather patterns. Mountain weather is very changeable. Wet, cold weather can occur anytime of the year. While late-July and August can be the driest, warmest time of the year, summer can also be wet and cool. [4]

Even though the northern section of the state of Maine and Mount Rainier are on the same latitudinal lines, Mount Rainier does not have the same frigid temperatures as Maine. The prevailing westerly winds, blowing in from the Pacific Ocean, bring more moderate temperatures to the mountain. 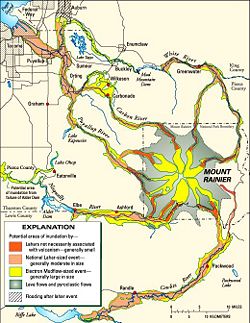 Mount Rainier's earliest lavas are over 840,000 years old and are part of the Lily Formation (2.9 million to 840,000 years ago). The early lavas formed a "proto-Rainier," or ancestral cone, prior to the present-day cone which is over 500,000 years old. The volcano is highly eroded, with glaciers on its slopes, and appears to be made mostly of andesite.

Around 5,000 years ago, a large chunk of the volcano slid away, with the resulting debris avalanche producing the massive Osceola Mudflow. This massive avalanche of rock and ice took out the top 1,600 ft. (488 m) of Rainier, bringing its height down to around 14,400 ft. (4,389 m). Prior to this, it is believed to have stood at 16,000 feet. [5] About 530 to 550 years ago, the Electron Mudflow occurred, although this was not as large-scale as the Osceola Mudflow.

After the major collapse 5,000 years ago, subsequent eruptions of lava and tephra (air-fall material) built up the modern summit cone until as recently as 1,000 years ago. As many as 11 Holocene epoch tephra layers have been found.

The most recent recorded volcanic eruption was between 1820 and 1854, though many eyewitnesses had reported eruptive activity in 1858, 1870, 1879, 1882 and 1894 as well. Though there seems to be no imminent risk of eruption, geologists expect that the volcano will erupt again. 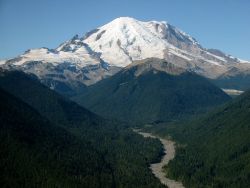 Mount Rainier with its main summit, Columbia Crest (14,410 feet) at the center. Massive Emmons Glacier covers most of the visible flank of the mountain. Left of the glacier is sharp pointed Little Tahoma (11,138 feet) with Frying Pan Glacier on its flank.

Glaciers are among the most conspicuous and dynamic geologic features on Mount Rainier. Glaciers deform and flow continuously, regulated in large part by climatic conditions. These changes typically take several years or more to become apparent and are therefore considered sensitive indicators of climate changes.

Mount Rainier has 26 recognized glaciers. Its largest glaciers are:

Glaciers erode the volcanic cone and provide the source of stream flow for several rivers, including some that provide water for hydroelectric power and irrigation. Together with perennial snow patches, glaciers cover about 36 square miles of Mount Rainier's surface, about nine percent of the total park area, and have a volume of about one cubic mile. [6]

One of many emergency evacuation route signs in case of volcanic eruption or lahar around Mount Rainer.

In the past, Mount Rainier has had not only large debris avalanches, but has also produced enormous lahars (volcanic mudflows) due to the large amount of glacial ice present. Its lahars have reached to Puget Sound, 150 miles away.

One of the greatest volcanic hazards is lahars, which are similar to pyroclastic flows but contain more water. Lahars formation comes from several sources:

A lahar flow is similar to that of wet concrete. Once they are flowing, they can reach speeds of 70 - 80 kilometers per hour and have depths up to 30 meters. Large lahars have occurred on Mount Rainier every 500 to 1000 years. The most recent large lahar poured into the Puyallup River Valley about 575 years ago. Geologists have every reason to expect that future lahars will continue their reccurring pattern.

According to geologists, due to the weakening of Rainier by hydrothermal activity combined with its heavily–iced top, the threat of lahars is real. Such a mudflow could destroy much of the heavily populated western Washington state. Reaching to Puget Sound, it could cause tsunamis there as well as in Lake Washington. 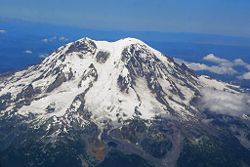 With Mount Rainier considered an active volcano, and the heavy population numbers surrounding it, there is vigilant monitoring performed by the United States Geological Survey (USGS) at the Cascade Volcano Observatory in nearby Vancouver, Washington. The University of Washington (Seattle) also measures, on a regular basis, any changes in the shape of the mountain.

An eruption that could produce a catastrophic lahar initiated by vigorous release of meltwater is expected to follow days, weeks, or even months of readily detected symptoms of volcanic unrest. Thus, it is likely that there would be opportunity for citizens and communities to prepare for an impending eruption. Inasmuch as lahars seek valley bottoms, people can quickly climb or drive to safety in many cases by simply evacuating the floor of a well-defined valley before the lahar arrives; they need go no farther than high ground adjacent to the valley.

A critical issue is to know when evacuation is necessary. Travel time for a large lahar from Mount Rainier may be an hour or less to the nearest city in the Puyallup valley, and possibly as little as 30 minutes may be available from detection of a large lahar to its arrival.

The U.S. Geological Survey is urging that an automated lahar-detection system be put into place. Except during volcanic unrest when intense around-the-clock monitoring by a team of volcanologists is underway, the time from initiation of a lahar to its arrival in a populated valley-floor area is insufficient for analysis of the data by scientists before notices are issued. Thus the system they are promoting must be designed to unfailingly detect a lahar with minimum opportunity for false alarms.

At the time of European contact, the river valleys and other areas near Mount Rainier were inhabited by many Pacific Northwest Native American tribes who hunted and gathered berries in the forests and mountain meadows. These tribes included the Nisqually, Cowlitz, Yakima, Puyallup and Muckleshoot.

Mount Rainier was first known by the Native Americans as Talol, Tahoma, or Tacoma, from the Puyallup word meaning "mother of waters."

Captain George Vancouver reached Puget Sound in 1792 and became the first European to see the mountain. He named it in honor of his friend, Rear Admiral Peter Rainier.

In 1833, Dr. William Fraser Tolmie explored the area looking for medicinal plants. He was followed by other explorers seeking challenge. In 1857 an army lieutenant, August Valentine Kautz attempted the climb with companions and a guide. By the eighth day, the guide was suffering from snow blindness and his companions were discouraged. Kautz continued alone, reaching the 14,000 feet level. He was approximately 400 feet shy of the summit.

Hazard Stevens and Philemon Van Trump hired a Yakima Indian named Sluiskin to be their guide assisting them to reach the summit of Mount Rainier. They reached their goal on August 17, 1870, after 10 and one half hours of climbing, leaving a brass nameplate and a canteen on the summit to document the first successful ascent recorded.

Stevens and Van Trump received a hero's welcome in the streets of Olympia, Washington after their successful summit climb. The publicity of their success brought others to challenge the summit. In 1890, Fay Fuller became the first woman to climb Mount Rainier. [8]

Naturalist John Muir from Scotland climbed Mount Rainier in 1888, and although he enjoyed the view, he conceded that it was best appreciated from below. Muir was one of many who advocated protecting the mountain. In 1893, the area was set aside as part of the Pacific Forest Reserve in order to protect its physical and economic resources, timber and watersheds.

Citing the need to also protect scenery and provide for public enjoyment, railroads and local businesses urged the creation of a national park in hopes of increased tourism. On March 2, 1899, President William McKinley established Mount Rainier National Park as America's fifth national park. Congress dedicated the new park "for the benefit and enjoyment of the people; and … for the preservation from injury or spoliation of all timber, mineral deposits, natural curiosities, or wonders within said park, and their retention in their natural condition."

The park contains outstanding examples of old growth forests and subalpine meadows. It is a natural setting of the Pacific Northwest region. Things to be done on a visit to Mount Rainier include: