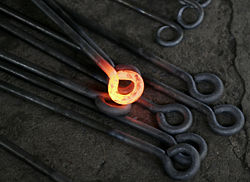 Hot metal work from a blacksmith

Traditionally, the term metal (from the Greek word metallon) has been applied to a chemical element that has a shiny surface and is a good conductor of heat and electricity. These properties, however, can vary from one metal to the next. More recently, chemists have recognized that the main distinguishing features of a metal are (a) the ability of its atoms to lose some of their outermost electrons to form cations, and (b) the bonding of its atoms by what are called metallic bonds.

Metals form one of three groups of elements—the other two being nonmetals and metalloids. These groups are distinguished by their ionization and bonding properties. On the periodic table, a diagonal line drawn from boron (B) to polonium (Po) separates the metals from the nonmetals. Elements on this line are metalloids, sometimes called semi-metals; elements to the lower left are metals; elements to the upper right are nonmetals. In nature, nonmetals are more abundant than metals, but most elements in the periodic table are metals. Some well-known metals are aluminum, calcium, copper, gold, iron, lead, magnesium, platinum, silver, titanium, uranium, and zinc.

Metals and their alloys are extremely useful for both aesthetic and practical purposes. While some are used for jewelry and works of art, many serve as construction materials for buildings, bridges, transportation vehicles, and industrial machinery. Some, such as copper, are used as conductors in electrical wiring; others, such as platinum and palladium, are catalysts for chemical reactions. Tungsten is used in the filaments of incandescent light bulbs; uranium and plutonium are used in nuclear weapons and nuclear power plants. Moreover, metal ions play significant roles in biological processes, such as the functions of enzymes, the transport of oxygen, and the health of teeth and bones.

All metals, except mercury, are solids at room temperature. In addition, the colors of metals tend to range from silvery white to gray—the two exceptions are copper and gold. As mentioned above, metals tend to be lustrous (shiny) and good conductors of heat and electricity. They also conduct sound well. Furthermore, they are usually ductile and malleable—that is, they can be readily drawn into wires and beaten into sheets. Solid nonmetals, on the other hand, are generally brittle, lack luster, and are insulators.

Metals are usually thought of as being hard substances, high in density and melting point. It should be noted, however, that there are metals that are soft, low in density, and low in melting point, but they are also quite reactive, and we rarely encounter them in their elemental, metallic form. For example, lithium, sodium, and potassium are less dense than water and are also highly reactive. On the other hand, some of the densest metals are osmium, iridium, platinum, and gold. The melting point of cesium is only 28.4 °C, but that of tungsten is as high as 3,422 °C.

The property of electrical conductivity is mainly because each atom exerts only a loose hold on its outermost electrons, called the valence electrons). Thus, a pure metal may be thought of as a lattice of positively charged ions (cations) surrounded by a cloud of delocalized electrons.

Most metals are chemically unstable, reacting with oxygen in the air to form oxides. Depending on the metal, the time scale of the reaction can vary. The alkali metals (in Group 1 of the periodic table) react quickest, followed by the alkaline earth metals (in group 2). The transition metals—such as iron, copper, zinc, and nickel—take much longer to oxidize. For example, potassium burns in seconds, but iron rusts gradually over a long period of time, depending on the prevailing environmental conditions.

Other metals—such as palladium, platinum, and gold—do not react with the atmosphere at all. Some metals form a barrier layer of oxide on their surface, which cannot be penetrated by further oxygen molecules. They thus retain their shiny appearance and good conductivity for many decades. Examples are aluminum and titanium. The oxides of metals are basic (as opposed to those of nonmetals, which are acidic).

Metal cations combine with nonmetal anions to form salts. Some common classes of salts are carbonates, sulfides, sulfates, silicates, chlorides, nitrates, and phosphates. Many of the minerals found in nature are salts.

In alchemy, the term base metal was used as a designation for common and inexpensive metals, to draw a contrast with precious metals such as gold and silver. A long-cherished goal of the alchemists was the transmutation of base metals into precious metals.

In chemistry today, the term base metal is used informally to refer to a metal that oxidizes or corrodes relatively easily and reacts variably with dilute hydrochloric acid (HCl) to form hydrogen. Examples include iron, nickel, lead, and zinc. Copper, too, is considered a base metal because it oxidizes relatively easily, although it does not react with HCl. Metals that resist oxidation or corrosion are called noble metals, which also tend to be precious metals.

In the past, coins used to derive their value primarily from their precious metal content. Most modern currencies, however, are fiat currency—money that is given legal tender status. This approach allows coins to be made of base metals. 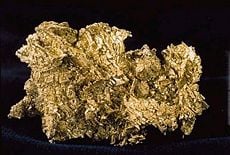 A precious metal is a rare metallic chemical element of high, durable economic value. The best-known precious metals are gold and silver. Although both have industrial uses, they are better known for their uses in art, jewelry, and coinage. Other precious metals include the platinum group metals: ruthenium, rhodium, palladium, osmium, iridium, and platinum, of which platinum is the most widely traded. Plutonium and uranium may also be considered precious metals.

Chemically, the precious metals are less reactive than most elements. They have high luster and higher melting points than other metals. Historically, precious metals were important as currency, but are now regarded mainly as investment and industrial commodities. Investments in gold and silver are often regarded as a hedge against inflation and economic downturn. 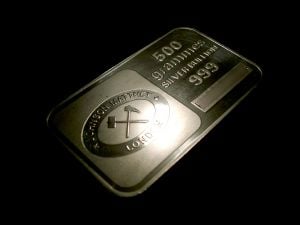 Precious metals in bulk form are known as bullion and are traded on commodity markets. Bullion metals may be cast into ingots, or minted into coins. The defining attribute of bullion is that it is valued by its mass and purity rather than by a face value as money.

Many nations mint bullion coins, of which the most famous is probably the gold South African Krugerrand. Although nominally issued as legal tender, the face value of these coins as currency is far below that of their value as bullion. For instance, the United States mints a gold bullion coin (the American Gold Eagle) at a face value of $50 containing 1 troy ounce (31.1035 g) of gold. In January 2006, this coin was worth about $550 as bullion.

The minting of bullion coins by national governments gives them some numismatic value in addition to their bullion value, as well as certifying their purity. The level of purity varies from country to country. Some bullion coins, such as the Canadian Gold Maple Leaf, are available at a purity as high as 99.99%. Note that 100 percent pure bullion is not possible, because the absolute purity of extracted and refined metals can only be approached asymptotically.

One of the largest bullion coins in the world is a 10,000 Australian dollar coin that consists of a full kilogram (kg) of 99.9 percent pure gold. China, however, has produced limited quantities of coins (less than 20 pieces) that exceed 260 troy ounces (8 kg) of gold.

Silver bullion coins have become popular with coin collectors because of their relative affordability. Unlike most gold and platinum issues, which are valued based on prevailing markets, silver issues are more often valued as collectibles—far higher than their actual bullion value. 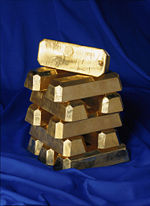 Gold bars from the Bank of Sweden

A given metal is precious if it is rare. If mining or refining processes improve, or new supplies are discovered and exploited, the value of such a metal declines.

An interesting case of a precious metal going common is that of aluminum. It is one of the Earth's most common metals, but when first discovered, it was extremely difficult to separate from its ores. For a while, aluminum was regarded as more valuable than gold, and aluminum bars were exhibited alongside the French crown jewels at the Exposition Universelle (1855). Napoleon Bonaparte is said to have used aluminum plates for his most honored guests at dinner. Its price, however, began to drop and collapsed altogether when an easy extraction method, the Hall-Héroult process, was discovered in 1886.

An alloy is a combination of two or more chemical elements, at least one of which is a metal, and where the resulting material has metallic properties. Examples of alloys are steel (iron and carbon), brass (copper and zinc), bronze (copper and tin), and duralumin (aluminum and copper). The resulting metallic substance generally has properties significantly different from those of its components.

An alloy "inherits" the characteristics of the elements it was made from, but it is usually designed to have properties more desirable than those of its components. For instance, steel is stronger than iron, one of its main components.

Unlike pure metals, most alloys do not have a sharp melting point. Instead, they have a melting range in which the material becomes a mixture of solid and liquid phases. The temperature at which melting begins is called the solidus, and that at which melting is complete is called the liquidus. For most pairs of elements, however, there is a particular ratio that has a single melting point, and this is called a eutectic mixture.

In practice, some alloys are named after their primary constituent. For example, 14 carat (58 percent) gold is an alloy of gold with other elements. Similarly, the silver used in jewelry and the aluminum used as a structural material are alloys.

In the specialized usage of astronomy and astrophysics, the term "metal" is often used in referring to any element other than hydrogen or helium—it includes substances as chemically nonmetallic as neon, fluorine, and oxygen. Given that the temperatures of stellar bodies allow practically no solid or liquid matter, and little normal chemistry can exist at temperatures that break down almost all chemical bonds, the term "metal" refers to materials produced by a type of nuclear reaction called the triple-helium process.

Based on their properties, metals have a wide range of uses. For example, based on their strength and hardness, many metals and their alloys are used as structural materials for buildings, bridges, industrial machines, railroad tracks, automobiles, trains, ships, aircraft, spacecraft, and so forth. A number of metals, such as platinum and palladium, are good catalysts for chemical reactions. Precious metals, particularly gold and silver, are used in jewelry and decorative items. Amalgams are used in dental fillings. Copper, an abundant metal, is an extremely good conductor of electricity and is widely used for electrical wiring. Tungsten, with its high melting point, is suitable for use in the filaments of incandescent light bulbs. Uranium and plutonium are radioactive materials used for nuclear weapons and nuclear power plants that generate electricity. In biological systems, metal ions play a number of important roles, such as the functions of enzymes, the transport of oxygen by hemoglobin (which contains iron), and the health of bones and teeth (which need calcium ions).